Where To Find Cheap Spanish Properties 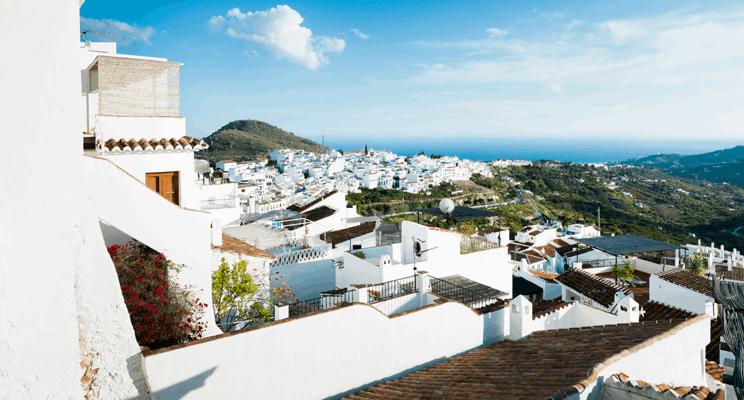 (This article was last updated in February 2018)

Confidence is well and truly back in the Spanish property market, and demand is strong as ever because it’s still very affordable when compared to the UK.

Across most of the Iberian peninsula, prices are not back to their 2006 peak either, and with tourism booming it’s also a great time to buy a rental investment in Spain.

Spain is a large country with 17 self-governing regions (not just Catalonia, although this region has been in the news the most in the past year) so do your research and remember that purchase costs, rental laws and other fiscal issues can vary between them. As ever, negotiate hard and never buy on price alone.

Getting a bargain on the Costa Blanca

South Costa Blanca is expat country with beach and golf resorts in Torrevieja and Orihuela Costa. It’s highly popular for a reason - it’s easy to reach and it’s easy to find inexpensive properties, including a new generation of contemporary style new-builds, though of course the real bargains will be amongst slightly dated resales.

North of Benidorm the landscape is lusher and the culture more traditionally Spanish, with some dazzling fishing-village/resorts such as Calpe and Altea. Denia has been a real spot in the past few months.

If you like a lots of other Brits around, you may like the Orihuela Costa for its affordability. Playa Flamenca and Ciudad Quesada are two of its hot spots, but the resorts of Cabo Roig and Guadamar del Segura are also popular.

For more space at a bargain price go inland to the Hondon Valley for a farmhouse with land for €130,000. Or look at Pinoso, a traditional village inland of Alicante and Torrevieja, where your money goes just as far and you can enjoy wonderful mountain views.

Or drive to the very north of the Costa Blanca around Denia where nearby villages such as Pego, La Xara or El Rafol d’Almunia offer apartments or townhouses for a budget of €50,000.

The extremities of the Costa Blanca have the best bargains. For a real bargain look at Oliva. Strictly speaking it’s a kilometre or two north of the Costa Blanca, but there are two-bed apartments in a lively and unspoilt Spanish town there from just under €40,000.  The same might be said if you head south into Murcia where Pilar de la Horadada is a growing hot spot, still a little cheaper than the already popular San Pedro del Pinatar - even closer to the lovely warrm waters of the Mar Menor.

click to search for a property on the costa blanca

Getting a bargain in Murcia

Where the Spanish coastline turns from east to south, the weather warms up and property gets cheaper. Even in well-heeled enclaves like the famous sporting resort of La Manga the luxury is more affordable than in some costas.

There are attractive fishing villages and the city of Murcia, but mostly it’s purpose-built-resort territory, dedicated to relaxation around communal pools and golf courses.

Murcia is one of the Spanish regions that has been slower to pick up, yet it has much to offer, especially its star feature, the Mar Menor on the Costa Calida in the north.

Also known as ‘Little Sea’ it is a large natural lagoon which is six miles wide and more than 10 miles long. With waters that are about five degrees warmer than the Med it’s a paradise for bathers, boaters and water sport fans.

It’s also got a few golf courses, including Camposol and several Polaris World resorts where you can get bargains - apartments from €60,000. The La Torre golf resort is the most popular, but also Hacienda del Alamo and Las Terrazas de la Torre.

There are also some attractive seaside villages and towns such as Sucina, Santiago de la Ribera and San Pedro del Pinatar. Townhouses here start at around €110,000.

Have a proper look at Sucina, that sits inland of  the two resorts of Pilar de la Horadada and San Pedro del Pinatar and a short drive from the Mar Menor. It’s a  traditional town sitting amongst citrus groves only 15 minutes from San Javier airport. You can get a two or three bedroom home for around €100,000 to €120,000.

search for a property for sale in murcia

Getting a bargian in Almeria

It’s popular with various nationalities and is is tipped as the number-one place to watch in Spain by a leading newspaper– for its affordability and also growing tourism. The average property price is around €130,000.

Popular spots include the capital city Almería – famous for its well-preserved Moorish heritage, Mojácar and Vera and resorts along the Costa de Almería.

Vera Playa – the beach area of Vera – is also a good value and a popular location. There you can get a good choice of two-bed apartments for around €70,000.

Another option is a characterful cortijo (or farmhouse) in the hills towards the Alpujarras mountains – you can get a small one for around €250,000, depending on the state of the renovation, although nearer €400,000 for a larger one with more land.

Exercise some caution if buying in rural areas – there are lively expat communities in the Almanzora valley, Arboleas, Zurgena and Albox but there have been a few issues in the past about properties built without the correct permissions. As always, get your lawyer to do those checks on the property for you.

search for a property for sale in almeria

Getting a bargain on the Costa del Sol

The Costa del Sol has everything - winter sun, the world’s best beaches and tourist infrastructure and also plenty of bling if that is your thing. Not really? Head inland to wild Andalusian and dip into the tourism on the doorstep when you feel like a fix.

Resort towns like Mijas Costa, Benalmadena, Fuengirola, Marbella, Puerto Banus and Estepona are an international melting pot so you’ll be sharing the golf course and fish restaurants with Scandinavians, Russians and Asians as well as the Spanish of course, who love to escape the hot capital for the coast during peak summer.

How does €90,000 for a two-bedroom resort property in Estepona grab you? Or €150,000 for one in Los Monteros, a prestigious area of east Marbella? All were available within a few minutes of looking, so don’t assume you can’t afford this costa.

As with the Costa Blanca, some of the best prices can be found at the furthest tips of this costa, both west around Manilva and Duquesa Marina, and east towards Nerja and Torre del Mar where you can find townhouses for just under €200,000 and smaller villas for just over.

When buying within a community or resort bear two things in mind: what are the service charges (general rule of thumb: you get what you pay for in terms of quantity) and is it worth paying higher service charges for extra amenities - if they are going to make it more attractive to holiday rentals?

search for a property for sale on the Costa del Sol

Getting a bargain in the Canary Islands

One of our favourite winter sun destinations, the seven islands of the Canaries are hard to beat for access and affordability. They have good transport links to the UK, year-round warmth, reasonable prices, rental potential and a strong expat community.

Each island is different so you can match the island to your interests, personality and budget. There’s party-loving Tenerife, the new hipster scene of Lanzarote or the unspoilt nature of La Gomera.

Lanzarote has fewer properties and tends to be more expensive because it has a history of being meticulously planned, but you can get an apartment for around €60,000. On Tenerife you’ll a larger selection of one-beds and studios for €60,000 but not in the popular resort areas of the west coast. You’ll need around €100,000 for a studio in the big-name resorts such as Los Cristianos or Los Gigantes.

Rentals can be very lucrative in the year-round resorts of the Canaries but consider long-term lets for two reasons if you are buying as a long-term investment. Firstly, the Canarian government has been imposing restrictions on short-term (or holiday) lets within developments, but also long-term lets are popular with the northern European “snowbird” market and can be less hassle.

search for a property sale in the Canary Islands

Getting a bargain in the Balearic Islands

The fashionable Balearics might not be the most fertile hunting ground for cheap Spanish properties, but look away from the exclusive chunks of coastline (or deep inland) and you will find pockets of much better value. The Balearics, like the Canaries, has been benefitting from a boom in tourism, whether for families or the young, party crowd.

Ibiza, now the go-to destination for the super-rich every summer, might be the toughest place to find bargains. For families, the fabulous beaches and slow pace of Menorca are hard to beat, and it’s the most well supplied by flights by some stretch is Mallorca.

From the year-round city of Palma to golf developments, marinas and world-class sports facilities, and a mountain range to explore too, Mallorca offers something for everyone. Prices have already been increasing in the sought-after south-west.

In Menorca, prices have been slower to recover from the Spanish property downturn and you can get small apartments from around €125,000 in Mahon to one for €150,000 in the big resort of Cuitadella.

Check out Palma Beach, Mallorca, an area regenerating from slightly faded 1970s resort to fashionable beach area close to Palma and the airport. Apartment in blocks along the front from around €200,000 with sea views.

search for a property for sale in the Balearic islands