When many of us think of Marbella, we tend to conjure up images in line with our preconceived notions of ‘Marbs’: excesses of whitewashed concrete architecture blighting the stunning Andalusian landscape; swarms of oily oligarchs swanning around on yachts; the cast of The Only Way is Essex.

However, this isn’t entirely fair. The city’s continued popularity as one of the most important tourist destinations on the Costa del Sol owes as much to the area’s unique natural beauty and cultural charms as it does its sunny climate and strong, “mega-rich” tourist infrastructure.

And this appeal is reflected in the consistently large number of Brits choosing Marbella and its environs for their overseas property searches – with the number of sale transactions thus far in 2014 being double those of 2012 and 2013.

The municipality of Marbella occupies a strip of land extending 27 miles between Malaga and the Gibraltar Strait on the Mediterranean Sea. This stretch of coastline boasts some of the region’s most beautiful beaches, including San Pedro de Alcántara with its popular promenade for walkers and cyclists.

The region’s proximity to the coastal mountains of the Cordillera Penibética means that almost every part of the city boasts lovely views of both the sea and mountains, which adds to the desirability of most areas of Marbella.

Although the coastline is heavily urbanised, with dozens of golf courses interspersed by small residential areas - Marbella has been spared the worst excesses of concrete construction and has preserved most of its attractive old town, which is hidden away from the main road. Centred on Plaza de los Naranjos (“Orange Square”),

Marbella’s charming historic quarter is awash with typically picturesque Andalusian houses, Renaissance period churches and buildings, and its signature orange trees. It is where a large number of the city’s cultural draws including galleries and seasonal festivals are to be found.

And it’s also where foodies visit, in search of cheap tapas and local delicacies such as Ajoblanco - a cold soup made with almonds, oil and garlic.

The simplest way to get to Marbella from multiple locations in the UK is by air, flying to Malaga airport. Plane journeys take about two hours 45 minutes from the UK, with Marbella being 30 minutes (45km) by car from the airport. Alternatively, you can also fly to Gibraltar airport – with journeys taking about three hours’ from the UK, plus an hour’s (80km) car ride.

Where to Buy Property in Marbella

The mega-rich don’t stay in Marbella itself - they hide themselves away in villas in the surrounding hills, or on huge yachts at the marina of Puerto Banús.

And just as Banús is one of the main focal points for tourists in the town, Marbella’s property ‘hotspots’ tend to be those towns with easy access to the glitzy allure of Puerto Banús - as well as Puerto Banús itself, of course.

Homes here tend to be large luxury apartments or villas in exclusive housing developments with price tags to match. A four-bedroom villa will likely set you back at least €1 million.

However, it is possible to find decent, affordable property in the town if you look around. If you’re happy to buy somewhere in need of a bit of modernisation, then you might be able to get a two-bedroom flat for as little as €140,000.

Nueva Andalucía is a residential area that has been popular with British ex-pats for some time, in large part due its close proximity to the glitz of Marbella and Banús and the natural beauty of the Sierra de Ronda mountain range.

It also boasts one of the most popular commercial centres in the area, Centro Plaza, which offers the attractive convenience of a one stop shop for local residents.

Villas and apartments in the area tend to be based on traditional Andalusian architecture and design. And although there are their fair share of fancy expensive properties like those seen in Puerto Banús, properties in the town tend to be more reasonable.

According to real estate agents, one area on the rise is the pretty and tranquil San Pedro de Alcántara and its vicinity. Located between Puerto Banús and Guadalmina - 10km from Marbella, this traditional town is currently seeing massive investment with a new boulevard being constructed near its main palm tree flanked beach promenade – with more restaurants and shops opening soon.

Many new properties being built here are already being sold out before completion, a testament to the area’s growing appeal. The town is also a big draw for golfers because of its location near some of Marbella’s most popular golf courses including La Quinta.

At present, property prices in the town are competitive – you can buy a two-bedroom apartment for between €150-250,000, whilst a four-bedroom villa will typically cost anywhere between €500,000 - €1 million.

A beachside community located near Puerto Banús and San Pedro, Guadalmina is another hot destination for property buying in and around Marbella.

Most famous for its 36-hole golf club, Guadalmina also boasts good shops and restaurants, a beautiful beach popular with surfers, and an “old town” whose historic streets are surrounded by the town walls of the old Moorish castle.

Property here, like most of Marbella, tends to be private villas or beachside apartments. 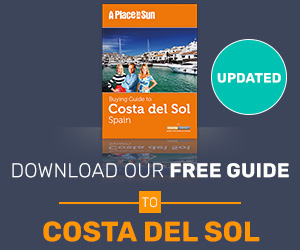 Claire Harrison got her Spanish visa in just 4 weeks! Find out about her story

It’s nearly two years since Britons began grappling with the process of getting a visa to move to Spain.  We’ve kept you updated with the latest news during that time and we are happy to say that the process IS getting easier.

A villa with its own pool is top of many buyers’ wish lists for a home abroad. Here we bring you 10 cheap villas in Spain with a private pool.