Where to Buy Property in Portugal

Buying a property in Portugal offers the promise of playing golf all year in your shirtsleeves, then eating freshly caught fish at the quayside brasserie while watching the sun set over the Atlantic Ocean. Portugal is, roughly, 600 kilometres north to south and 200 east to west yet most of the British buyers fit into the most southerly 10 kilometres – the Algarve.

Those of us who venture to the north will discover attractive and mountainous countryside where villagers still enjoy a distinctly old-fashioned way of life. Up here it snows in winter and bakes in summer, although on the coasts the summer heat is made more bearable with cooling Atlantic breezes. Porto is Portugal’s second largest city and a World Heritage Site, with expensive property. Go a few miles inland and there are village properties as cheap as anywhere in Europe.

Central Portugal, although there are other smaller mountain ranges and forests of cork and oak, is famous for its gentle rolling hills and plains full of wheat. Countryside properties in this part of Portugal are a good and affordable alternative to rural France and Italy, although you may struggle to find another English speaker. The coast north of Lisbon is known as the Silver Coast, and has been slowly developing over the past 25 years as lovers of Portugal look for an alternative to the Algarve. Its most famous town is the medieval walled city of Obidos, rightly famous these days for its golf courses.

Immediately south of Lisbon is the coastal resort town of Sesimbra, centre of the up-and-coming Blue Coast. It is particularly popular with Lisbon’s well-heeled residents, being just 30 minutes away. Further south again is the Alentejo region reaches the ocean in a series of beaches that can seriously claim to be about the best in the whole of the Iberian Peninsula.

Then you’re in the Algarve. For a long time Portugal stayed slightly below the radar as British buyers headed off to explore “new” destinations like Bulgaria or Cape Verde. So it didn’t overdevelop like southern Spain and remains an authentic and affordable choice. Many Britons, especially among the retired, have taken to its friendly and laid-back vibe and now 10 per cent of the population in towns like Albufeira are British. There are some seriously high-class golf communities here, but also affordable property in the coastal villages. Even more affordable are the communities of the inland Algarve, still with warmth and golf, and easy access back and forth to Britain all year via Faro Airport.

Most UK buyers head the Algarve for its Mediterranean climate, beautiful beaches and world-class golf resorts. Faro airport is well-supplied with flights and is an easy half-hour drive from popular spots on the central Algarve. The “Golden Triangle” area – around the five-star resorts of Quinta do Lago and Vale do Lobo and the town of Almancil – certainly draws many buyers but you’ll pay a premium for buying there. You can buy a three-bedroom apartment at Quinta do Lago for €500,000, but villas tend to top €1 million.

Your money goes further if you head inland – you might get a lovely four-bed villa in the hills near Loule for €600,000; or west to the popular resorts of Vilamoura (two-bed apartments for €100,000) or Albufeira, similarly priced and also a holiday rentals hotspot popular with the northern European “snowbirds” who winter on the Algarve. There are big plans to expand the facilities at Vilamoura marina from 2016 onwards. If you find the stretch between Faro and Albufeira is a little too developed – or pricey – you can head west or east.

The Eastern Algarve around Tavira is also worth checking out, a lovely little stretch of little harbour towns, sand bars and beaches (and even its own classy golf resort, Monte Rei) from which Spain is easily reached. You’ll fine plenty of choice with a budget of €200,000, and the nearby little village of Cabanas is even more affordable. The French love it in the east so prices are beginning to rise. Or go inland, where in the vibrant little village of Sao Bras de Alportel you can get a choice of two-bed properties for €90,000.

Lisbon is a fabulous city being rejuvenated by overseas buyers – especially Chinese investors – and the popular suburbs of Cascais and Estoril appeal to expats and retirees for whom the Algarve is too sleepy or seasonal.

South of Lisbon is the rural Alentejo region that attracts discerning travelers but fewer home hunters than the Silver Coast – north past Lisbon. Here, where the rolling hills and vineyards meet the Atlantic in hundreds of kilometres of sandy beaches there are some striking contemporary villas, especially around Obidos. Apartments (and smaller townhouses) start at €100,000 to €150,000, villas from €250,000. Other hotspots are the charming town of Leiria and the Praia D’el Rey resort. 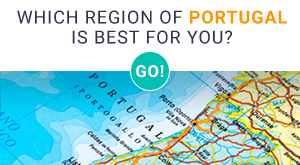 Algarve has long been thought of as the most popular region for Britons in Portugal, but as prices have risen across the Algarve, and interest has risen in other parts of Portugal, the distribution of foreign residents is much more diverse.

Watch | Ask the Experts about Healthcare in Portugal

Watch our interview with the experts from the British Embassy and Department of Health & Social Care as they answered key questions about accessing healthcare in France now the UK has left the EU.

From 17th May it will be possible to fly to Portugal without quarantining or self-isolating when you return to the UK. So maybe now's the ideal time to sear

Now that the UK is no longer part of the EU, how can you obtain healthcare in Portugal? Liz Rowlinson explains