Cyprus is a little wonder. It has the most gorgeous Mediterranean beaches, plus ancient history dripping from every rock and not to mention property in Cyprus is very reasonably priced. It has warm winter sun, as well as a bit of skiing. It has a long history of British influence and friendship, plus a rich Greek culture too. It has great nightlife for the younger crowd plus a strong network of more sedate pursuits for the many retired residents.

There are a lot of pluses to Cyprus, and the British are not the only ones to have noticed. It is an increasingly popular island for house hunters and surely has a bright future as a global vacation destination at the crossroads of East and West. Maybe not just holidays either – like Malta, Cyprus is attracting businesses and investment. Greek Cypriots are an energetic bunch: think of Peter Andre, Theo Paphitis, Sir Stelios Haji-Ioannou, founder of easyJet, you’ll probably fly there in one of his planes. Not bad for a country of just 800,000.

For many British holiday-home hunters and relocators, Cyprus fell off the radar following the financial crisis due to negative publicity (often justified) over miss-sold mortgages, dodgy developers and a problem getting title deeds. These problems have to a large extent been solved, and a new generation of us can move in and take advantage of the depressed Cypriot property prices. Prices fell by as much as 50 per cent between 2010 and 2015 according to the Royal Institution of Chartered Surveyors (RICS). There are real bargains in those sundrenched hills with the stunning Mediterranean views!

Cyprus is 240 kilometres long and about 100 wide and a little smaller than Devon and Cornwall combined. It has been divided politically for decades, since a violent division of the island in 1974 that saw 200,000 Greek Cypriots leave their properties in the north. For this reason, few people are willing to buy property in the north for fear of title issues.

The southern part of Cyprus has the Troodos Mountains at the centre, leading down through oak, pine and cypress forests and rocky hills to the beaches. The most popular area for British buyers has traditionally been Paphos, in the south-west, and the villages around. Paphos is a rapidly-growing town that is increasingly popular for young families as well as the retired. It has an airport with direct, year-round flights to the UK.

Limassol is the second largest city (after the capital, Nicosia) and has been attracting international buyers to its superb new marina. Another famous place is Ayia Napa in the far south-east, once a byword for youngsters holiday excesses but considerably calmed down now.

There are serious moves to heal this divided country now, as it looks to a bright new future.

Where to Buy Property in Cyprus

The biggest hotspot among British buyers is the area around Paphos, an attractive harbour, resort and Unesco World Heritage site on the south-western coast. It is home to many of the island’s cultural highlights – including a medieval fortress, frescoed tombs and mosaics – along with amenities for every need, such as its own airport with year-round easyJet flights to the UK. It’s also gaining a new marina, improved roads and generally a good old face-lift as it gears up to be European City of Culture in 2017.

Popular neighbourhoods include central Kato Paphos – around the medieval port, apartments from around £70,000; the authentic Cypriot villages of Peyia and Tala just outside the town; and the five-star Aphrodite Hills resort nearby. In Peyia there’s a big choice of affordable properties – from apartments for £40,000, to three-bed townhouses for a little over £100,000 to five-bed villas for £250,000.

In the tranquil village of Tala your money doesn’t go quite as far – and there are fewer homes for sale – but you can still get a one-bed apartment for £60k or a three-bed villa for £250,000. Coral Bay with its Blue Flag beaches is another popular resort area – with three-bed villas from around £230,000 to £300,000.

Or there’s Polis - a small, picturesque town on the north-western coast at Chrysochous Bay, bordering the Akamas peninsula, an exceptionally beautiful nature reserve. Polis has some of the best beaches on the island, in secluded bays with crystal-clear waters, and a wonderful café culture, especially at Latchi, the attractive harbour of Polis with its recently extended marina. It’s a little cheaper than Paphos, with apartments from €60,000 and villas from €250,000.

In the Aphrodite Hills golf and equestrian resort resale apartments start at just over £100,000; but frontline golf villas will cost around £700,000 plus.

Limassol is the second largest town on Cyprus. A lively metropolis and business hub, with top-class shopping and cosmopolitan restaurants in its world-class integrated marina, it’s very popular with the Russian market. This demand tends to keep prices a little higher than around Paphos – apartments start at £90,000, villas from over £300,000. Properties in Limassol Marina start at around £340,000 up to over a million.

How to Buy Property in Cyprus

Purchasing a property in Cyprus is based on English law. When a buyer finds the right property, they should put down a Reservation Fee of between €1,000 and €5,000 (depending on the value of the property), it is best to reserve it this way as many resale properties are offered by more than one agency. Contracts are then drawn up, outlining the conditions of the sale, and this Reservation Fee is made up to 10 per cent (within two to three weeks) for a resale property and usually 20-30 per cent for a new-build.

Once the Contract of Sale is signed by the buyer, their lawyer files it with Land Registry within 60 days as this secures the property in the buyer’s name(s). Buyers need to present bank and character references with the application.The balance of the money is generally paid by the completion date agreed with both parties on resales and in stages agreed by the developer for new-Builds.

These figures are doubled if there are two names on the contract i.e. the first €170,860 is at 3 per cent and so on. The lawyers usually charge 1-2 per cent for legal fees and agents’ fees of 3-6 per cent.

Historically there have been two main issues in Cyprus, both involving title. The first relates to the ownership of properties in northern Cyprus – held by Turkey since 1974. Prices are cheaper there, but the former Greek Cypriot owners still claim much of the property and any purchase there is risky – whatever agents tell you.

The second issue is with the slow issuance of title deeds in southern Cyprus, combined with some dubious dealings by developers there in recent years, which makes proving clean title essential. Although the authorities have expedited the whole process – and are making big efforts to make the buying process far more transparent in every respect - some buyers are, rightly, very reluctant to buy without title deeds. 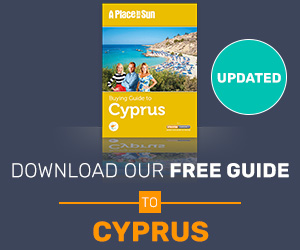 Uri and Shiann appeared on a recent episode of A Place in the Sun with Leah Charles-King - we caught up with them to find out what happened when filming ended!

Find out where you can buy a bargain property in Cyprus! And read our top tips for finding a cheap apartment or villa...

The cost of living in the UK is rising fast. Inflation has reached a 40-year high of 9 per cent. War in Europe is causing petrol prices to reach record highs and food prices to increase for everyone, but how do other costs still measure up?  Even energy tariffs are dealt with differently by European governments. In the second piece of a series looking at each of our top five countries, we take a look at Cyprus.

The most popular questions from our latest webinar.