Where to Buy Property in Greece

Greece is sunny, welcoming and the property is inexpensive.

It has a population of only 11 million spread across land the size of England, with a large mainland around which are hundreds of islands. It has a coastline of 17,000 kilometres – that’s four times longer than Spain’s – all lapped by the gentle, crystal clear waters of the Mediterranean, so there’s plenty of room for you.

Secondly, the economic crisis may be severe, but tourist numbers have actually increased, reaching a new record of 26 million in 2015, which means that the places where most of us buy are thriving. Best of all, the thing that many of us notice first about Greece is the friendliness of its people – and they remain as warm and welcoming as ever.

When buying in Greece, think hard about when and how you will be using your property. There is a great variation in islands between those, for example, close to Athens, which tend to be expensive boltholes for Athenians, or those far away such as Corfu, which are more popular with British buyers. The British have a great affinity with Crete too, with large expat communities in the Chania and Rethymno areas.

Greece has escaped the over-development that blights other countries. It doesn’t really do gated developments either, though there are modern developments if that’s what you like.

Travel out of season however, and you will need to change planes in Athens as the Greeks, despite government efforts, tend to close up their seaside resorts in October and head back to their villages and families – maybe that’s why they’re so friendly when the season starts again.

In terms of market volumes, Crete rules because large and diverse, it appeals to all price ranges. Further south than most other islands, it’s got the climate but also – on the north coast – the sort of infrastructure and amenities that appeal to retirees. Crucially, it is also well-supplied by airlines too.

The north coast, especially Chania (west), or Agios Nikolaos (east) is popular, but the inland villages are also popular – Neopoli, for example, where a two-bed townhouse costs less than €100,000.

The accessible Peloponnese – connected to the mainland by the Corinth Canal - is also growing in popularity. Historically popular with Athenians, this large archipelago south-west of Athens is spectacularly unspoilt and offers some great beaches.

Whilst villas at Greece’s most expensive new development, there, Amanzoe at Porto Heli, are an eye-watering €3 million, you can get a three-bedroom townhouse for around €150,000 at a less stellar location. Across the bay from Porto Heli, the chic island of Spetses has remained (relatively) pricy.

Better-known with most European tourists are the Aegean islands, including the favourite honeymoon location of Santorini, and the party island of Mykonos. These aren’t the cheapest islands for holiday homes but look away from the tourist hubs and you can get that traditional white sugar-cube house with beautiful blue shutters (and a cat lazing nearby), for around €150,000.  Mykonos is well known for its luxury contemporary glass villas that go for a couple of million euros if they have sea views.

For yachties, the Ionians will always be king. Corfu has a fashionable edge – the chi-chi north-east coast where they have been several sales over €5 million in the past year; but it is not high-end villas, and you can get a three-bed cottage for €100,000 near Kassiopi, down by nearly 50 per cent from the 2008 peak. Nicely renovated townhouses might cost around €250,000.

There’s also Kefalonia - still remembered fondly from Captain Corelli’s Mandolin, with apartments from under  €100,000 but equally some stylish villas for and even some new-build developments. From summer of 2016 where will be some new flights from East Midlands airport.

It’s Rhodes in the Dodecanese that’s been, dare we say it, slightly booming again in 2014, with a strong demand for international buyers of high-end properties. Lindos is a hotspot but you can get a modest three-bed villa for around €250,000, or a detached one with a bit more space for nearer €400,000.

Pelion, this mountainous and yet verdant peninsular poking out from the East of the Greek mainland into the Aegean Sea, remains almost untouched by human hand. Thankfully, large scale development has never taken its ghastly hold in this glorious region and the whole peninsula consists of a myriad of delightful small villages.

How to Buy Property in Greece

When you have found your ideal property, and are sure you want to go ahead, your lawyer will prepare the preliminary sales agreement. This covers the basic terms of the deal such as the price, what is included, who are the buyers and sellers, the payment method and the date for completion.

It is important that the agreement lists any particular reasons why the buyer or seller may pull out without losing a deposit, for example if there is a problem over the building licence, or if the sale is contingent on mortgage approval. If not, if the buyer pulls out of the deal in breach of the agreement they will lose their deposit. If the seller tries to pull out, however, she could lose double the deposit.

In the time (usually four to six weeks) between signing the sales agreement and completion, searches are conducted by your lawyer. These will ensure that: the property is the seller’s to sell and has a clean title, that there are no debts on the property and that it complies with all planning laws and permissions.

Your lawyer is unlikely to visit the property himself so it will be up to the buyer to ensure that what is in the building licence matches what is at the site. Check there is no illegal swimming pool or extension, or a veranda closed in to create an additional room. If there are illegal parts of the building discovered later then the new owner may be fined.

By this time, you will have engaged a public notary who will prepare the final deed. The buyer will normally attend the signing of the deed in person, at the notary’s office, along with lawyers from both sides and the seller. You don’t have to attend the signing of the final deed; you can assign power of attorney to your lawyer. The balance of the sale price will be transferred along with the notary’s fees, estate agent fees and all taxes. Keys are transferred and the property is yours.

Indeed buying costs for resales were reduced from around 13-14 per cent between 2014 and 2015, while the VAT rate has been raised for new builds. Buying costs also vary according to such factors as the date of construction or the location of the property. Buying costs tend to be higher in percentage terms for the cheaper properties.

You should also engage a lawyer. When buying a property in Greece you are required by law to engage a lawyer anyway, and it is sensible to choose an English-speaking one. You can find international property lawyers at shows such as A Place In The Sun Live as well as in our magazine or website.

Or you can choose a local lawyer in Greece. Sometimes a local lawyer will be cheaper, but it is important that they are experts in property, that you can communicate with them easily, and that they are working exclusively for your benefit and are not financially associated with the developer or estate agent such that there could be a conflict of interest.

Legal fees in Greece are set at 1 per cent for properties up to €44,000, 0.5 per cent on property up to €1,467,251 and 0.4 per cent over that, all plus 23 per cent VAT. Remember to take certain documents with you to Greece if you intend to buy a property as you will need to get a tax registry number (one for each person buying), and open a Greek bank account. You will need your passport of course, plus proof of your address on a couple of utility bills and proof of your tax number.

Your estate agent and lawyer will be able to advise on what you might need to prove for each eventuality. Property buying in Greece is reasonably straightforward. Property is sold freehold and with documents signed before a notary. Buying costs have come down in recent years and add around 10 per cent to the purchase price.

The Greek for house is spíti. When you head to Greece, estate agents are regulated by law and should be professionally qualified and licensed. The main professional association for agents is the Hellenic Association of Realtors (www.sek.gr) and there is also a branch of FIABCI, the International Real Estate Federation.

A good start would also be Greek members of the London-based Association of International Property Professionals (AIPP: www. aipp.org.uk). Agents normally charge between 2 and 5 per cent of the property price which is split between buyer and seller, and they normally accompany clients on viewings to prevent any private deals being done.

If buying new build property, ensure the advertised price includes VAT. Check your agent will be working before booking any flights; Greece has a lot of public holidays and celebrates Easter according to the Greek Orthodox Church which is a month separate from when we celebrate it in the UK.

If you are non-resident you must declare any income you have earned in Greece. This applies even if you receive this income by renting out to people from your home country and the money never touches Greece.

You will also normally have to declare this income in the country where you are tax resident but can normally offset the tax paid in Greece through Double Taxation Treaties.

In any case, even if you do not earn any income in Greece, you should file annual tax returns as long as you own real estate property in Greece.

The taxes that you pay when you buy a property in Greece will normally depend on whether you are tax resident there or not.

Tax residence is a determined by a number of factors: 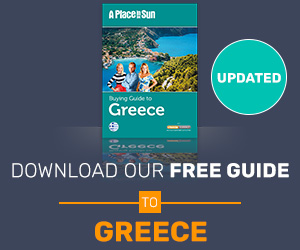 You don't have long to get a Greek golden visa with the current requirements - last month the Greek government announced that the €250,000 threshold will double to €500,000