Property on the Costa Blanca

The Costa Blanca is the single most popular place for British property hunters. Why do we love it so? Firstly, the weather is simply superb. You can expect sun on at least 320 days each year, frost virtually never, yet with the edge taken off summer temperatures by the sea breeze. In practical terms, it’s never too hot or too cold for a round of golf!

The Costa Blanca is an affordable choice for property, enabling many of us to afford a holiday home here as well as a base in the UK. If you want to pop down for a long weekend, Alicante airport has flights all year even from the quietest regional airports in the UK.

There’s wide variety within its 200 kilometres, appealing to different sorts of house-hunters. The Costa Blanca North, above Alicante, is more mountainous, with pine forests leading down to attractive bays and beaches set around old fishing villages.

The more northerly towns, such as Javéa and Denia are just far enough from the airport to turn off the long-weekenders, appealing more to permanent residents and retirees. But while we may think of this as prime holiday-home territory, these are also busy Spanish towns with the traditional way of life intact.

When people drive up from Alicante and first see the tower blocks of Benidorm shimmering in the heat haze, some feel a surge of excitement and others just shudder. There’s a reason why Benidorm has remained so popular for 60 years – its bold and energetic local authorities keep the quality high and the atmosphere buzzing – it now boasts Spain’s tallest and most striking residential tower block, the Intempo Tower, 47 storeys high.

South of Alicante the Costa Blanca is flatter and hotter, but also more affordable. Resorts like Torrevieja and Orihuela Costa are dedicated to enjoyment. The beaches are as perfect as you would imagine, but there are also numerous affordable golf courses, marinas, waterparks and family entertainments.

If you want the kind of retirement where you can sit outside a sunny cafés all morning, then head out to the golf course in the afternoon, maybe have a sail or go fishing from your kayak, before joining your friends at a local club in the evening, all while looking forward to your grandchildren popping down for half-term, then this is the coast for you.

Where to Buy Property on the Costa Blanca

Stretching up from the tip of the Mar Menor via Alicante city to Gandia in the north, the Costa Blanca is a large and diverse stretch of coastline. Along side the Costa del Sol it’s the most popular region for British buyers, who have been visiting, investing and relocating there in large volumes.

Part of its broad appeal is the suits a wide range of buyer, from those seeking sophisticated former fishing towns to resorts catering for mass tourism, or affordable inland homes. Alongside its Blue Flag beaches and excellent transport links - with Alicante, Murcia and Valencia airports all serving the region - is that it's fast been evolving to offer the sort of infrastructure and amenities that the Costa del Sol has done for some years.  So where are the hotspots?

Moraira, variously known as the “St Tropez of Spain” or the “gem of the Costa Blanca crown” is a small upmarket coastal town backed by mountains and vineyards. The most desirable areas are El Portet, Pla del Mar, Pinar de L’Avocat and La Cometa. A three-bed villa with a pool will cost €400,000-600,000 in the prime parts.

Nearby Benitachell is also popular, whilst a good selection of quality villas can also be found in Benissa – from €400,000 plus.

Another former fishing village is Javea, another classy, low-rise town that has been likened to a Spanish version of Dartmouth in Devon, and it’s got a marina, stunning Arenal beach, golf and also a lovely hinterland, the Jalon and Orba valleys. A three-bed villa with a pool might cost around €400,000 in Javea, whilst a three-bed townhouse might cost €200,000 in Jalon or a three-bed villa for around €280,000 Orba.

Nearby Denia is a very Spanish town with castle, two marinas and a wide choice of property, with a two-bed apartment around €165,000, a three-bed villa around €300,000.

The pricing is similar to that of Calpe, famed for its emblematic rock bisecting two long, sandy beaches although high-rise blocks have led to its soubriquet, “a high-rise Benidorm”.

Ah yes, then there’s the infamous Benidorm, reality TV star and arguably the liveliest spot in the North. Decent one-bed apartments in a high-rise tower start at around €100,000.

Torrevieja has attracted mass tourism in a big way but this doesn’t seem to deter many British property-hunters who are magnetized by the highly affordable property there. Fancy an apartment for around €60,000? This is where most people might look.

It apparently does boast the highest proportion of British expats in Spain, and that’s because it’s got a lot to offer: two salt-water lagoons, five golf courses nearby, Blue Flag beaches, a thriving market, family friendly facilities and plenty of nightlife.

Inland, Villamartin is very popular: its Club de Golf Villamartin is a prestigious course; good restaurants are plentiful at Villamartin Plaza and there’s a vibrant international community of owners and expats. Two-bed apartments/townhouses cost €110,000/€125,000 whilst three-bed villas start at a little over €200,000.

In the nearby upmarket gated residential community of Los Dolses, prices are a little higher with three-bed properties north of €185,000, and a four-bed villa with a pool around €275,000.

Three coastal hotspots are Playa Flamenca, La Zenia and Cabo Roig. Prime shopping aside, La Zenia itself has two Blue Flag beaches, with many two- and even three-bed apartments around €130k. Pricing is similar at next-door Playa Flamenca, a small, busy resort combining historic buildings with plenty of new-build.

At the bottom of the Costa is Cabo Roig, a peninsula of palm-lined avenues, the Blue Flag beaches, three golf courses and lovely views towards La Manga and the Mar Menor. There are plenty of two-bed apartments available for €115k.

* Purchase taxes in Valencia is 10 per cent 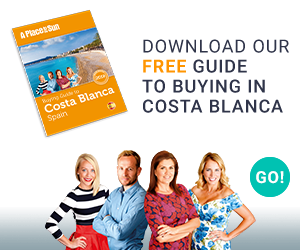