Case Study | We Love our Property on the Costa Blanca 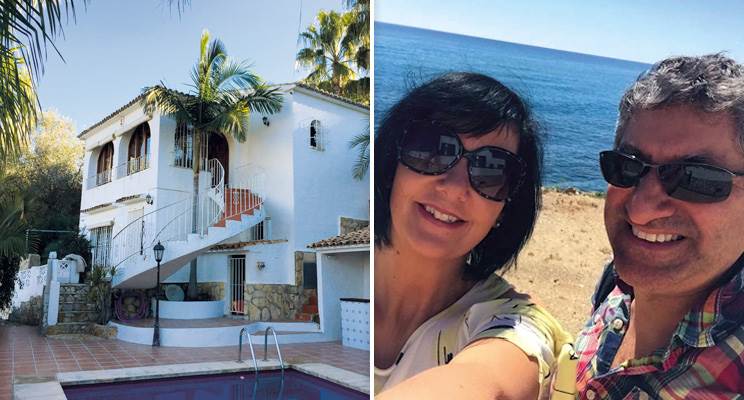 We are always getting emails asking what happened to some of the people we have helped to ﬁnd a home in our magazine or through our TV series. Here Richard Way revisits one of our successful buyers who bought their property in Spain.

Lorraine and Nev Bulsara from Coventry were inspired by watching episodes of  A Place in the Sun to kick-start their search for a home in Spain. Little did they know that they would also appear on the TV show and find a three-bedroom property for €186,000. Lorraine, 55, who works for Coventry city council, explains.

“After watching lots of programmes and a year of research trips we set upon the Costa Blanca where there is not much rain, affordable homes and nice beaches,” says Lorraine, who has three children aged between 25 and 29. “We liked Javea but it wasn’t cheap and we were keen to have a detached home rather than an apartment where we might get noisy neighbours, or feel that we might be too noisy.

“So, with a budget of £150,000 we wanted three bedrooms, a pool and barbecue area and we started looking at Moraira. This is a lovely, family-oriented and classy area without high-rise apartment blocks and inevitably the budget started creeping up.

Download our free guide to buying a Costa Blanca property

“We approached doing the TV show last July (with Ben Hillman) with caution. Nev kept saying ‘We are not going to buy anything’, but we really enjoyed it and ironically it was him that really went for one of the properties – a slightly tired and rundown three-bedroom property that is split into two parts, with one floor having its own front door. It cost €186,000 through the agent Select Villas.

“It really was a case of buying the worst house in the best location. The other properties on the hillside were worth at least €250,000 but were in better condition. It was at the top of our budget. The Belgian owners of ours had not done much to it in years and yet the outside was so pretty, with a private pool and the garden on two levels. The first thing we did was repair the cracked tiles around the pool, so the children could use it.

“We are probably going to need to spend around £35,000 on it; but luckily on having reached 55, I could draw down some money from my pension pot so this will be useful. I love the house, and every time we go – we have been five times with family and friends – we make some progress in sprucing it up. The aim is to move from spending holidays there to a few months a year there. I know Nev would live there full-time, but I would miss family and friends at home too much.

search for a property for sale on the Costa Blanca