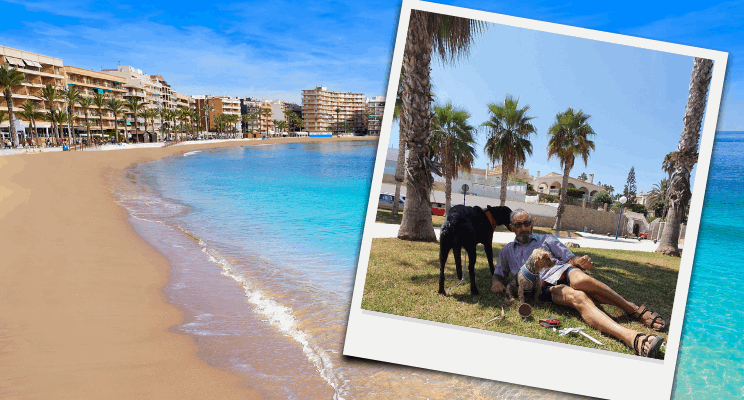 Widower Tony Ferreira spent lockdown watching webinars on aplaceinthesun.com about how to buy in Spain. The ‘really bad’ winter in Dublin a year ago was the final push that he needed to seek retirement in the sun. “I’ll have to do it now or I’ll die regretting it,” says the former employee of DHL with three children in their fifties and one grandchild.

Tony, now 82, had visited the Costa Blanca in 2018 when the idea began to take root, but he says he didn’t have the courage to commit. ‘I had my house in Dublin valued and I thought I might rent in Spain first. But then the pandemic got in the way – and that winter happened. “I just thought stop having these fears, and just do it,” he adds. “Some people thought I was mad at 81 years old.”

Find properties for sale in torrevieja

The three-bedroom house just five minutes from the Carrefour supermarket. The property has a huge basement that is large enough to take his collection of 26 guitars – now 28 as he’s bought two more in Spain since – and he can walk to the marina in 35 minutes.

“I am in a nice little cul de sac and there is a huge wild area nearby where I walk my dogs, a lurcher and a yorkie. There’s a communal swimming pool only a minute’s walk away, and the community fees are only €130 every six months.”

On the 5th August he drove over with the dogs and a friend via the ferry to Bilbao. “We drove 100km through the night and arrived in Torrevieja at four in the morning!”

He didn’t have any issues about getting a visa as he’s got an EU passport, and he can access the Spanish healthcare on the same basis as the locals. He’s in good health and got Covid a month ago, but he’s fully boosted so was OK, he says. He works out with weights every morning and might take up golf again – he lost interest when his wife died five years ago. “I brought my cart and my clubs so I we’ll see…”

He says he has no regrets about moving to Spain. ‘The only bad thing is the mosquitoes you get here – I am two miles away from the salt lakes in Torrevieja – which can be annoying between August and November.”

His neighbours are a mix of Spanish and English – he’s met a retiree from Bristol who lives across the road. He enjoys walking his dogs and playing and singing with his band – via Zoom – on Thursday nights – a mix of country music and ballads. “It keeps me going,” he says.

He’s also learning Spanish via Duolingo. “At the moment I can say I live in Torrevieja with two dogs but I can’t understand when they reply in Spanish!” he laughs. “My one regret is I never got on A Place in the Sun TV programme as I would have loved to have Jasmine showing me properties. I am looking forward to spending what time I have left in the sun.”