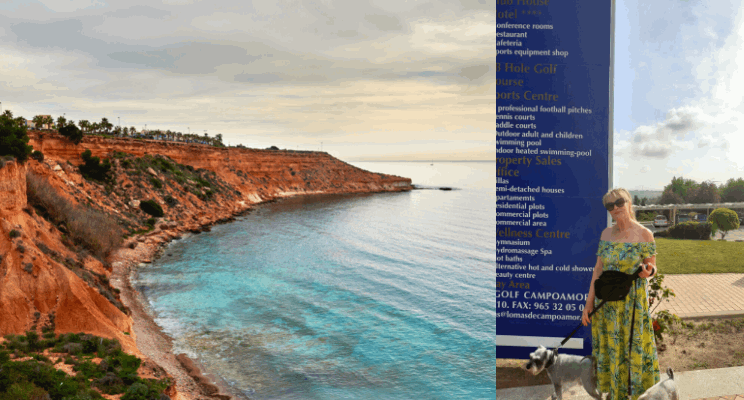 Diane Seaton has dreamed of moving to Spain for many years. Her family used to own a holiday property in Calahonda on the Costa del Sol and she’s always felt at home in the country. “Whenever I arrive in Spain I feel alive, but whenever I returned home, I just plodded on with work and life,” says the former wedding planner from the West Midlands.

But in September she moved to the Orihuela Costa on the Costa Blanca for an early retirement of walking her two dogs in the balmy winter sunshine and exploring the area.

Her move to Spain has been delayed two years by the pandemic. She first put her house in the Hall Green area of Birmingham on the market and found a buyer just when Covid hit the UK. Then the country shut down for three months but she her buyer remained keen, and she finally did the deal in March 2021, completing in June.

Not planning to work, she applied for the Non-Lucrative Visa (NLV) that would allow her to live in Spain, for a year, before renewing if everything works out. Getting all the documents together for the visa took three months and this included getting private medical insurance, the annual cost of which she had to pay up front for the first year – a cost of around €1,000.

When flight restrictions permitted it she flew out to Spain in July to open a bank account and also to get her lawyer to check that she had all the documents in order, although this doesn’t have to be done in person. She used the relocation department of Sun Lawyers – based in Orihuela Costa - to support her with the application after being recommended them by a friend living there.

They charge a fee of €350 for doing this, but she says that it was money well spent and despite having the experience of running a business she doesn’t think she could have done it alone. On learning that all the visa documents were in order she was on tenterhooks about her appointment at the Spanish Consulate in Manchester when they would be inspected. “The documents expire after three months so if you don’t get it approved you have to start the process all over again,” she says. “Yes, it was stressful!”

Her appointment was on 8th August and she was astonished to get her visa issued 10 days later, instead of the four to five weeks she’d planned for. “I was amazed as I’d booked the ferry to Spain for September.” In the meantime she had been renting her old house back from its new owner because she had nowhere to stay.

She advises anyone planning on applying to be patient, flexible on timeframes and to break the process down into manageable steps. “Don’t get daunted by the task. Think of step one as getting the visa and focus on that. When that’s done, step two is how to get your TIE [residency card], register with the padron, sort out your driving licence.”

After packing up and sorting out pet passports she was on the ferry to Sandander and ‘never looked back’. She doesn’t play golf but she’s ended up purchasing a two-bedroom townhouse on a golf course, Campoamor Golf, a mature golf resort surrounded by pine trees and palms, where two-bedroom townhouses start from less than €100,000.  It sits inland, 10km from Torrevieja with sweeping views down the coast towards the Mar Menor.

“I liked the 24-hour security and felt very safe there, as a woman on her own,” says Diane, 62, who plans to have some golf lessons on the par 72 course.

“I realise it would have been simpler if I’d moved out before Brexit but the pandemic happened and everything was beyond my control. Yet being here makes me feel as if Covid is behind me,” she says. “I feel very relaxed and enjoy the outdoor lifestyle – there are no crowds anywhere, it’s so peaceful. I don’t need to watch episodes of A Place in the Sun anymore – I’ve got my place!”

Find out how to Relocate to Spain, more about the NLV or search for properties on the Costa Blanca.

Find out more about moving to Spain