Which Overseas Property Buyer Tribe do you Belong to? 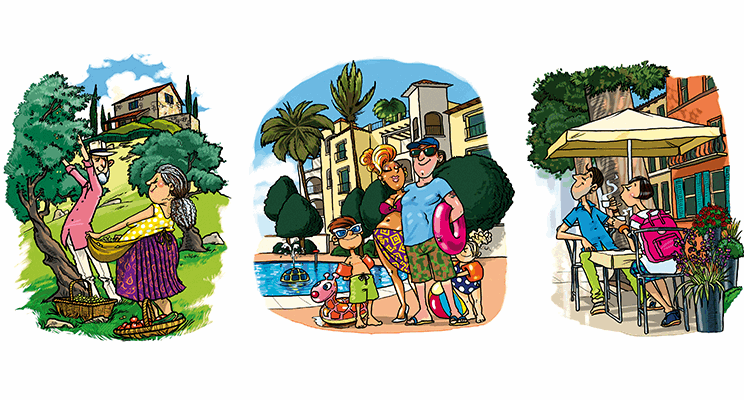 When it comes to buying a holiday home we can be a bit of a tribal bunch. Many of us gravitate towards well-trodden paths – there’s great comfort in familiarity. Yet the urge to escape fellow Britons is the modus operandi of another group. So, to help you identify your calling, here we pick out the most prevalent tribes.

This is the dominant force in the industry – the  54-to-59-year-olds who have decided the time is ripe to buy that holiday home they have long been dreaming of (and saving for).

Despite their different situations, mid-lifers (let’s call them Mark and Sue), are in good financial shape, with the highest spending power among all age groups. Maybe they have been helped by a recent inheritance – a poignant windfall that has fuelled the idea to get on with life and make the most of it while they are also in good physical shape. Mark’s got into road-biking since turning 50 and likes heading for the hills.

The plan is usually to buy a place for holidays and gradually spend more and more time at the property as they ease down to retirement (Mark runs his own office supplies company and Sue is in education). Sue can have the odd girls’ weekend there too, and it will also be somewhere for the children to use (both on their second marriages, they have five children between them).

Many mid-lifers gravitate towards the Spanish Costas or the Algarve. Their budget is £150,000 to £200,000 and they are after a property with some outside space, maybe on a small development close to beaches, bars and restaurants: they don’t want to be a taxi service for the kids.

Mark and Sue ended up spending €220,000 (£197,000) on a two-bedroom townhouse in a sought-after urbanisation in Mijas on the Costa del Sol. After buying costs and a few bits from Malaga Ikea, it was about €255,000 all in. Sue decided to draw down a lump sum from her pension to cover the extra. South facing, with a lovely terrace, the property has been recently renovated. With two bathrooms, it’s perfect for a weekend away with their best friends from Edgbaston, back home.

Sue says: “We are still pinching ourselves!  It’s the kind of home we always wanted, with a lovely shared garden and two pools. The location is great, too. We are around 25 minutes from Marbella if we want a bit of a night out.

SItting on a beach every day is simply not an option for Village People. Roasting on the sand with hordes of other people – no Grazie, VPs want to be immersed in authentic local life, away from the full English breakfast brigade.

Jane and Roger love anything rustic  (their home in Oxfordshire is a detached rural cottage) and while they have explored Andalusia, the Peloponnese and southwest France, they just adore Italy. They’ve done the “grand tour” of Tuscany, Umbria, Venice, Lake Como, but also like to think they venture off the typical tourist track by exploring areas such as Puglia and Basilicata.

Looking for a second home is no different and to get more for their money they are looking at Le Marche, a region next to Umbria that is surprisingly nice – a bit like Tuscany without the premium price tag, in fact.

Roger, in his early sixties, is semi-retired and still does a bit of management consultancy work, so he is keen to spend summers in Italy; and Jane, a fiftysomething maths teacher at a private school, gets about eight weeks in the summer anyway. Their two sons have young families too now, so hopefully, they will visit as well.

Their ideal home? A restored detached farmhouse full of character features, including exposed stonework, cotto and Impruneta terracotta floors, vaulted ceilings, maybe the original bread oven and a large garden full of olive, fig and citrus trees – around an acre would be perfetto. With their budget of £350k, they should easily be able to get one with three or four bedrooms, with a pool and some scope for improvement.

Are they worried about the Italian political crisis? Or the rather basketcase economy? No, it’s Italy after all; remember Berlusconi and those bunga bunga parties? They’ve seen it all before and it’s not as if they are moving there for good. No, their purchase is about the lifestyle, not making money on their property, which they intend leaving to Jeremy and Giles anyway.

They dream of spending their mornings exploring the hilltop towns of the area, shopping in the village markets like locals and then taking it easy during the afternoon, catching up on the latest Donna Leon mystery or just pottering around in the garden.

Jane says: “We just love Italy. Our little house just oozes character and is perfect for rediscovering the simpler pleasures of living - just sitting reading a book, eating our own produce picked from the garden that day -  the tomatoes taste so much better!”

The Morris family from Croydon love the Costa Blanca. They go two or three times a year and are now thinking of buying a villa there, using a few savings and freeing up about £40,000 by remortgaging their three-bed semi.

Why do they love it? It’s easy. Plenty of cheap flights there from Gatwick, most people speak English, beaches are great, and it’s pretty good value too. With a budget of £70,000, they are hoping to get a two-bedroom apartment around Torrevieja or the Orihuela costa – the southern bit of the Costa Blanca.

Mike, 37, a self-employed builder, has been looking on the internet and there ’s a lot for sale, but prices are certainly going up: two years ago, when they first started talking about buying, £70,000 went a lot further.

Something on a development with a pool would be perfect for the children – Kai, 6 and Sophie, 4. There are a lot of one-bed resales for €50,000. They might not get something brand new for their budget, but Jen, 34, who runs a beauty salon, has got an eye for interior design and she can give it a bit of a makeover.

Mike says: "It’s our dream to get our own place in the sun – and it will be a pension pot, too. Prices are going up faster in Spain than they are in London. Our family and friends can all come to stay, my mum too.”

Home and Away Townies

Whether downsizers, retirees or Generation X and Y couples, there is a growing number of urbanites for whom rural life holds little appeal. When home in the UK is either a converted warehouse, swanky new-build, or a flat on a garden square, the idea of a musty old stone house with dodgy plumbing and rubbish wi-fi miles from the nearest coffee shop in rural France just doesn’t do it.

But there are also the UGGs (urban grannies and granddads as they are called by UK developers), such as sixtyish Trevor and Kath who have downsized from the detached family home in Greater Manchester and as well as buying a luxury new-build in one of the city’s exciting new regen developments they are going to pick up a little apartment in France or Spain. They’ve worked hard for many years, the children have finally flown the nest and they are going to have some fun. A new brand of roving retirees checking out the latest microbreweries and street-food festivals rather than golf clubs and rambling tours.

“Fun” entails frequent weekend trips to European cities – in the past six months they’ve done Lisbon, Madrid and Bordeaux – where they check out the best restaurants, art galleries, shops and beaches. Having tried the odd Airbnb they now want somewhere they can just head to for regular weekends, the perfect “lock-and-go” place.

They adore Paris, although it’s suddenly got very expensive, so top of the list is Barcelona (suffering a little from the Catalan independence issue), although they have their eye on “up-and-coming” locations such as Porto and Valencia.

They are torn between a historic conversion in the Barri Gotico (old historical quarter) of Barcelona and a warehouse conversion in the trendy Poble Sec district, both with a concierge service and smart technology (like they have back home). The Catalan capital seems especially good at this sort of development aimed at the international market.

Trevor says: “Something that fuses old and new, historic and modern, is perfect for us. We love the labyrinthine streets and medieval façades of the Gothic quarter with its lively tapas bars.”

search for an overseas property for sale here