Where are the Property Hotspots on the Costa del Sol? 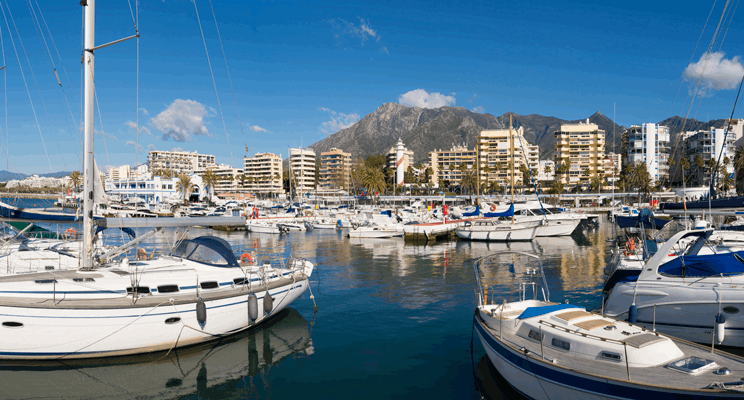 The world-renowned Costa del Sol is one of the most sought-after locations in Spain with its superb climate, Mediterranean lifestyle and glamorous resorts and marinas.

Easily accessed by an ever-increasing range of airlines going into Malaga (the airport serves over 120 destinations per week), the Costa del Sol is also an eminently weekendable destination, whether you seek a golfing trip, a city mini-break, or a few days on the beach, but it’s also well suited to full-time relocation.

Whilst thousands of buyers gravitate towards the highly developed strong of coastal resorts there are also plenty of inland towns and villages - or pueblo blancos - such as Benahavis, Coín and Ojen.

On the Costa del Sol, the Marbella area will be top of many people’s lists, although buyers have a whole string of household name resorts to choose from - so what are the biggest hot spots and how far does your money go?

There is nowhere else quite like Marbella on mainland Spain. The fashionable hub of the Costa del Sol is the only truly cosmopolitan year-round resort with a constellation of world-class amenities and the most glamorous properties in southern Spain.

Ever since the mid 195os when Hollywood stars and Arab royalty flocked to the newly opened Marbella Club the resort’s reputation as an exclusive second-home destination has been evolving. Now it is shorthand for super-yachts, VIP beach clubs and bling.

From TOWIE fans to Swedish retirees, global high-net-worth individuals, and British families and Saudi oil barons, Marbella is the summer playground of choice across a broad demographic. It is the “multi-country” nature of its market that propelled it forward to lead the recovery across the Spanish mainland and it is has been a good couple of years ahead of the rest.

Industry experts suggest the Marbella market bottomed out in 2011, putting 2017 as its sixth year of recovery. At the very top of the tree are palatial multi-million-pound villas in La Zagaleta, but prices drop as you head away from the wealthy enclaves.

For example, in the surrounding area of Benahavis, there are the country clubs of Benahavis Hills and Monte Mayor, and you can get a three-bedroom townhouse in the village of Benahavis Pueblo for around €450,000.

Tucked behind the Golden Mile, the exclusive residential area of Sierra Blanca is also popular – townhouses cost less than €500,000 but villas go up to €20m. The so-called Golden Mile - west of Marbella to Puerto Banus via the Marbella Club - remains a highly sought-after area, whilst interest has increased in the next-door and less consolidated areas of Nueva Andalusia and San Pedro de Alcantara.

In Puerto Banus, a compact harbour town of white-washed buildings, pretty plazas, wide boulevards and upmarket shops, you need around €170,000 for a new studio apartment, or a two-bedroom apartment a 15 or 20-minute walk from the centre. Penthouse apartments go up to €800,000 - but it’s all about location in this patch of Costa.

Next up, west along the Costa are Estepona, Manilva and Duquesa, three areas that have been growing in popularity for their comparative affordability, - you can get a small apartment from around €90,000 - yet easy access to the nightspots of Marbella proper. Prices are a little higher in Estepona due to its proximity to Marbella - expect to pay €249,000 for a three-bed townhouse.

Why choose these? They might not have the fashionable beach club scene but this stretch has got refreshingly quieter beaches, the same mountain backdrop and an arguably better quality of life. There are also waterparks close by, good schools, supermarkets, medical centres. There is also a beautiful golf course at La Duquesa Golf and Country Club.

East of Marbs are the buzzy popular package resort areas of Benalmadena, Mijas and Fuengirola. These are cheap, cheerful and fun. Expect to pay around €100,000 for a one-bedroom apartment, or townhouses cost from around €170,000.

Two alternatives to living in a resort are Malaga city - artistic, buzzy and with a great foodie culture but usually not as cheap as the cookie-cutter coastal developments - or to go inland, to villages such as Coin, Ojen or Olvera.

In Coín, a small but busy town at the foot of the Sierra de Mijas mountains,  you can get a good choice of three-bedroom village properties with a budget of €100,000 - perfect for those who wish for something that feels a little more Spanish - and calmer - than Marbs.

search for a property for sale on the Costa del Sol