Where to find a property for sale in Normandy

Historic links to the UK and proximity make Normandy a popular place for the British to buy a holiday home although the region is often bypassed by those heading to the sunnier regions further south.

But really, it’s got plenty of attractions in its own right that make it sought by buyers - from charming fishing villages to chic seaside towns, for history buffs the D-day landing beaches, the Bayeux Tapestry and Mont St Michel and for gourmands all that wonderful seafood, Calvados and cheeses such as Camembert.

Most of the region is within an hour of one of the three major ferry ports - Caen, Le Havre and Cherbourg - so ease of access and affordable property are the main drivers but how do you choose between the five departments? The average price of properties in Upper Normandy is €150,000 and of those is Lower Normandy €131,500 (figures from Notaires de France) so much of it is very tempting.

Although buyers don’t necessarily choose by the department in Normandy - and they changed in 2016 to confuse people - we are starting in the south, where the affordability of Orne makes it popular with buyers, whilst Eure is popular for its proximity to Paris.

Although both relatively undiscovered compared to the coastal regions, these areas have got rolling hills, Norman churches and half-timbered houses and picturesque chateaux and churches. Orne especially is not unlike parts of Southern England, except you can get a cute cottage in a hamlet for or detached three-bed house for around €77,000. Popular locations for property searches include Sept-Forges, Champsecret, Beaulandais and Domfront (Orme) and Brionne, Bretigny and Le Bec-Hellouin (Eure)

Taking its name from the English Channel, the north-west Manche takes in the Cotentin Peninsula with Cherbourg at its tip, historic MontSaint-Michel but also the beautiful village of Barfleur and the Utah Beach of the D-Day Landings.

Access could hardly be easier from the UK yet with that and so many tourist magnets many people pass through it, and for that reason, there are also some great opportunities for income-generating gites or B&Bs. Tudor-looking half-timbered houses - known as colombage - along with longeres (rectangular single-storey granite houses) are popular.

For those seeking rural Normandy Coutances, Hambye and Villedieules-Poeles in the western Manche have been popular. In the former, a historic and popular town, you can get a four bedroom family house for €300,000, although there are plenty of cheaper locations, with three-bed detached homes for €200,000.

The lovely sounding Calvados - the central coast including chic Deauville - has the highest average property price at €160,000, and there are plenty of picture-postcard villages along the department’s “Cider Route”.

The coast is more expensive. Honfleur, a picturesque historic town with an ancient harbour is very popular, but you can buy a little townhouse in the centre from €180,000, a one-bedroom apartment for half of that.

Inland you can yet fine equestrian properties much more affordable than their UK comparables and also some very affordable rural bolt holes - with two-bedroom homes as low as €40,000.

The eastern coast of Normandy, Seine-Maritime averages at €153,000 and includes the industrial port areas of Le Havre and Dieppe as well as the beautiful historic city of Rouen.  British buyers tend to head inland - you can get lovely family homes in the countryside with change from €250,000, including lovely Norman thatched cottages with four or five bedrooms. 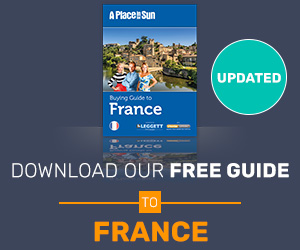 This couple bought a home in France with Jonnie Irwin on A Place in the Sun last year - here's how they're getting on now!

The cost of living in the UK is rising fast across the country - but how does this compare to other countries? How much cheaper is it to live in France?

Rural France is much loved for its laid-back lifestyle and culinary traditions but also its affordable property. Where can you find the cheapest property for sale in France?