Here's where British nationals are buying property and living in Spain 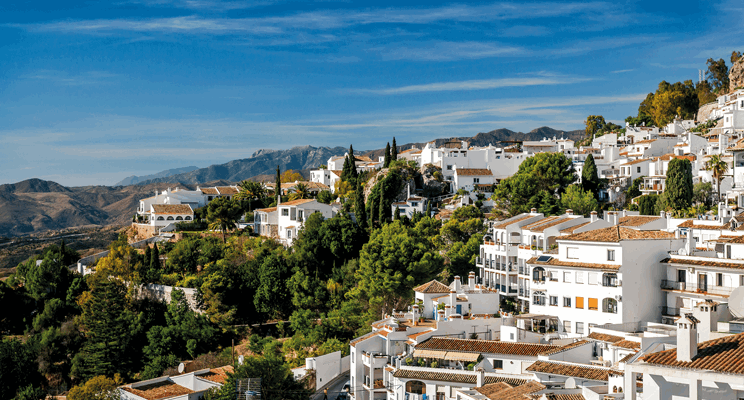 Spanish property commentator Mark Stucklin analyses statistics to ﬁnd out where the Brit hot spots are across our favourite overseas destination.

Spain is our favourite place for an overseas home. Whether you seek beaches, mountains, rural bliss, island escapes or sophisticated city living, it has something for everyone.

However many Britons planning to buy a home in Spain say they want the ‘real Spain’ but end up buying in one of the British ghettos on the coast, where life seems a bit like Blighty with sunshine. Whilst the ‘real Spain’ is a romantic dream that can expand your horizons, the ghettos are more convenient and oﬀer lots of things you love from home.

That helps explain why the majority of Britons who buy a property in Spain do so in one of 60 out of Spain’s 8,116 municipalities that are home to around half of all the 250,000 British expats oﬃcially resident in Spain.

Whatever your priorities it helps to know where you will ﬁnd the British ghettos in Spain, so you can seek them out or avoid them. That means looking at the data available on where the British buy a property and live in Spain.

It helps to start with an idea of the overall volume of British demand for homes in Spain, and the number of homes owned by Britons. When it comes to looking for hotspots, there’s a big diﬀerence between a few thousand buyers and owners, and a few hundred thousand.

Figures from Spain’s Association of Land Registrars illustrate the ebb and ﬂow of British demand since 2006. Between 2006 and 2018 the British purchased 126,168 homes in Spain, on top of those purchased by Britons in decades going back to the 70s when British househunters ﬁrst started coming to Spain.

Though down from more than 20,000 per year in the boom, the number of homes acquired each year by British buyers is currently running around 10,000, even after the Brexit referendum.

There are no ﬁgures for the number of British vendors each year, but I assume that buyers have outnumbered vendors most years in recent decades, leading to a net increase in the number of Spanish homes in British hands. I expect that several hundred thousand homes in Spain belong to British owners, including primary residencies, second-homes, and investments. Some studies I have seen in the past put the ﬁgure at 600,000 or more.

Which Spanish region has the most Britons?

If hundreds of thousands of Spanish homes have British owners, the question is where are they located? Are they thinly spread throughout Spain, or concentrated in hotspots? Data from the Association of Spanish Notaries shows us the regions in which the British are the biggest group of foreign buyers today.

The notaries publish maps of foreign demand every half year, showing the regional demand of non-residents buying properties, on the one hand, and expat residents, on the other.

The map above shows the two most important nationalities buying as non-residents in each region. So, for example, 32% of all properties in Andalusia purchased by non-resident foreigners in the second half of 2018 were acquired by British buyers.

This shows that the British buy second homes all over Spain, but when it comes to primary residencies, they tend to stick to Andalusia, Murcia, and the Valencian region. But they don’t tell us how many British buyers and owners are found in each region, let alone in each province or municipality. For that, you have to turn other sources.

Breaking it down by province

You would expect to ﬁnd ghettos in regions where British buyers are number one, namely the Valencian Region, Andalusia, and to a lesser extent Murcia. Data for 2015 from Spain’s Association of Land Registrars bears this out.

Though the ﬁgures are from 2015, the regional distribution of British demand changes little from year to year, so the picture from 2015 is valid today.

So, British demand is heavily concentrated in a few provinces, and you will struggle to ﬁnd a British buyer in the majority of Spain’s other provinces. 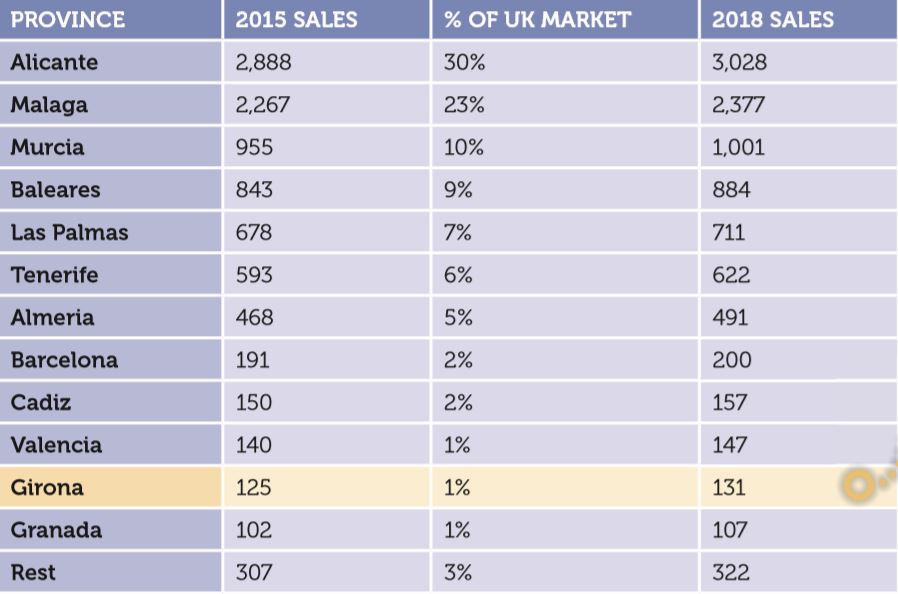 Now we know which provinces to look in, the question becomes where are British hotspots at a town/municipal level? Neither the notaries nor the registrars answer this question, but data from Spain’s municipal register, known locally as the Padron, shows us where the expats live and gives us a good idea where to look.

Before looking zooming in on municipalities, it’s worth noting that, according to the padron, the British expat population in Spain has declined from a high of just under 400,000 in 2012 to 250,000 today, partly due to an oﬃcial purge of the database in recent years.

Many British expats choose to stay oﬀ the radar and avoid the register for tax reasons, but they will live in the same places as the rest. The oﬃcial number of expats has been growing slightly in the last two years.

*The latest ﬁgures by province are for January 2019

Unsurprisingly, the data from the padron tells a similar story at a provincial level to the Land Registry. 47% of British expats in Spain live in just two provinces, once again Alicante and Malaga. 95% of Britsh expats live in just 16 of Spain’s 50 provinces, and 34 provinces have a British expat population of fewer than 1,000 residents.

(Data relating to British hotspots at a town/municipal level will be available on aplaceinthesun.com soon - so stay tuned!)