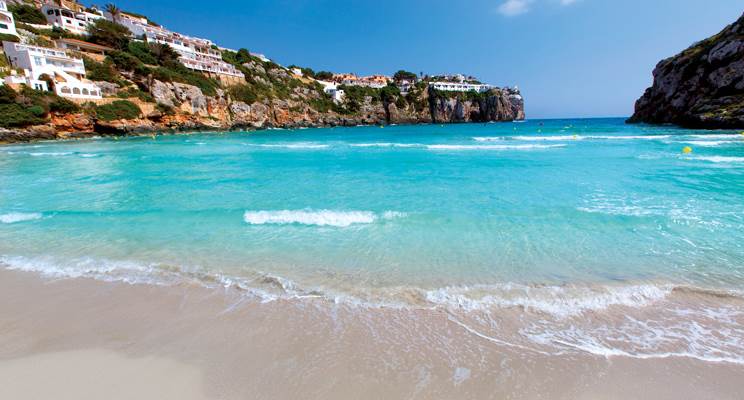 If the Spanish Costas are a bit overdeveloped or too full of tourists for you, perhaps you might consider the Balearic island of Menorca for unspoilt beaches, charming fishing villages and a hinterland of lush green fields that is not unlike Devon –  but with guaranteed sun.

It’s only two hours’ flight from the UK and a shortage of direct flights to cope with demand in recent years has been rectified.  Jet2 has been strongly promoting the island and there are now flights from Edinburgh, Glasgow, Leeds/ Bradford and Manchester as well as London airports. There are new property buyers as a result of these routes, according to Colin Guanaria of Bonnin Sanso, the agent with the most properties on its books on the island – currently more than 3,000.

“British buyers are still the biggest for us on the island, with the French fast catching up, but with the most significant change the revival of the domestic market with the Catalans and Madrileños now buying again,” he says.

Tourism is increasing, too, with demand for the Balearics up generally, with the perception that they are safe, secure islands away from the terrorist risks in other parts of the world. Aena (Spain’s national airport authority) reported a 10.9 percent increase in visitor figures in the past year (the British are 34 per cent of the total), with 84 routes into Mahon airport.

So what else appeals and what to buy? The sleepy island is another world from Majorca and Ibiza, its fashionable neighbours that enjoy a much higher profile. Menorca, the furthest west, is similar in size to Ibiza and also full of low-slung whitewashed rural fincas (farmhouses) set among olive groves and vineyards. The fields of Friesland cows (imported by the British years ago) are bordered by drystone walls and the vernacular style of gate made from curved strips of wild olive wood.

Life seems pretty unchanged from  50 years ago, which is what appeals to some people. Tight planning controls on the island have stopped it being spoilt and there is a refreshing lack of concrete. Although the season is relatively short for most of the island, apart from Mahon, rentals are in big demand. Tourism is on the rise, with prices more affordable than in parts of Ibiza and Mallorca.

Around the coastline, it has hundreds of tiny beaches, or cales, as well as large sandy ones. Among the best are Cala Macarella and the nearby Cala Mitjana (on the south coast) and Cala Pregonda and Platges d’Algaiarens (north coast).

You won’t find lively beach bars or nightclubs but instead an increasing array of good restaurants, a cricket club (of which the commentator Henry Blofeld  is a big fan), a knitting circle, a Rotary Club, a golf club and walking and painting groups, in which many of the 4,000-strong British expat community  are heavily involved.

The British have been in Menorca for 300 years – the Navy’s periods of occupation spanned 1708-1756 – and the island accommodated them by starting to make gin, an industry for which it is still famed. Menorca’s first road, Camí d’en Kane (named after Richard Kane, the first governor) was part of the legacy of this “golden age” for Menorca, as well as Georgian sash windows that can be seen in towns such as the capital Mahón (or Maó) and nearby Es Castell, where Lord Nelson and Emma Hamilton once lived near the red-brick English barracks.

Proximity to the commercial centre and airport of Mahón is the main factor for most buyers, although not everyone wants the buzz and noise of being in the town or close to the harbourfront road.

Mahón is part of Menorca’s “golden triangle” that includes Sant Lluís and  Es Castell, both within a few minutes’ drive of the town. This eastern corner of the island also contains the popular hubs of Punta Prima, Alcaufar, Biniancolla and Binibèquer. In Biniancolla, a quaint fishing village of whitewashed houses on the rocky foreshore, you can get a small house for €525,000. Opposite a small restaurant across the cove, it is only a 10-minute walk to the busier resort of Punta Prima, yet it sits in a peaceful location.

Whilst reports circulate highlighting that prices are going up at the top of the market, estate agents Bonnin Sanso reports a 12 percent average price increase in the past 12 months, so the sluggish market in Menorca is finally waking up, fuelled by an influx of French and Catalan buyers especially.

You can get a three-bedroom, two bathroom apartment in a nice complex in these tourist areas, or even a little villa around Cala en Porter – another British hotspot on the south coast, close to the airport and Mahón.

At the far west of the island is Ciutadella, the charming original capital which has a bourgeois elegance that diﬀerentiates it from the working-port feel of the commercial Mahón. With old palaces and the opera house, it is the cultural hub, with some great beaches nearby.

Although it’s the farthest point you can be from the airport and the capital – 50 minutes to the islanders is a long commute – the west oﬀers the best sunsets and is growing in popularity. Engel & Völkers is opening an oﬃce there next year.

Green shuttered townhouses are being bought up by developers to be transformed into boutique hotels (apparently there are nine in the pipeline) although most people prefer to be in one of the beach towns just outside the centre. The areas of Cala en Blanes, Los Delﬁnes and Cala’n Bosch are popular, which are close to beaches, waterparks and all the restaurants and shops of Ciutadella.”

In the attractive complex of Los Delﬁnes you can get a furnished two-bedroom apartment for €135,000. Or you can get a two-bedroom apartment in Cala’n Bosch for €106,500, or a three-bedroom modern villa with a pool for €399,500. Prices are similar in Calan Bruch, where the agent has a three-bedroom villa with a pool for €380,000.

Prices increase in the upmarket north-coast hotspot of Cala Morell (north of Ciutadella) where you can buy a seven-bedroom modern villa with an inﬁnity pool that drops right down to the sea for €1,850,000.

Search for a property in Spain/Menorca below

search for a property in menorca

Why more British buyers want to take a Spanish mortgage