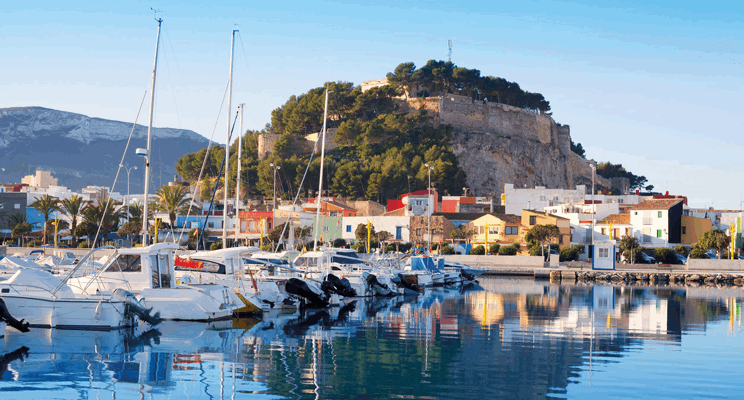 Another day, another 'Five Minute Focus' instalment. Today we look at the picturesque setting of La Marina Alta, which is based on Spain's popular Costa Blanca region.

Where is the Marina Alta?

‘The Marina Alta’ refers to the headland that reaches out towards the Balearics situated on the northernmost tip of the Costa Blanca. ‘The Marina Alta’ is equidistant from Alicante to the South and Valencia to the North. It includes Denia, Javea, Moraira and Benissa.

The region is steeped in history, a hidden paradise encompassing some of the very best of what Spain has to offer. Unspoilt white sandy beaches stretch as far as the eye can see against a backdrop of mountains, traditional whitewashed fishing villages, castles and luscious countryside. Best of all, the region boasts the finest year-round sunshine in Spain.

By far the quickest way to reach the Marina Alta is by flying into either Valencia or Alicante international airports with an abundance of flight options both in and out of season. The AP-7 motorway offers excellent road connections between the two airports making it very simple to reach from either airport within an hour.

You can also drive from the UK either by passing through the picturesque villages and towns of France and heading down the east coast of Spain or by arriving at Northern Spain via the Portsmouth to Bilbao Ferry and then making the delightful journey across central Spain.

There is also a popular sailing route and a small but a significant number of visitors to the area arrive in style by sailing from Ibiza or the neighbouring island of Formentera.

A place to come and unwind

It is no secret that Spain is good for your health (it has the highest life expectancy in Europe) and in 2006 the World Health Organisation confirmed that the beautiful year-round climate of the Northern Costa Blanca was one of the healthiest of the world in which to live.

The unique micro-climate in the Marina Alta sees average temperatures of 15°C during the “milder” December and January months, rising to 30ºC in July and August. The area also has more recorded hours of sunlight than any other place in Spain, which is great for restoring vitamin D levels and providing a perfect place to come to unwind and relax year-round. Paired with a Mediterranean diet and plenty of fresh air it will help you to feel re-energised.

A place to come and play

Not only will the region provide you with a healthy lifestyle, but it will be an enjoyable lifestyle too. Whether you are spending the day at La Sella’s 18-hole Jose Maria Olazabal designed championship course in the beautiful foothills of the Montgo National Park, taking out a jet ski in the crystal clear waters of Javea’s Arenal or choosing to explore the many thousands of kilometres of walking and cycling routes that span the region, there is always something to keep you and the family entertained and active.

However, if you prefer to just sit back and watch the world pass by then where better to do so than in one of the many restaurants situated along Denia port. Here you can while away the hours in beautiful surroundings listening to live music and if the mood so happens to take you – board a catamaran from the port and find yourself in San Antonio or Palma before the day is out.

So what property can I buy in La Marina?

You won’t find high-rise apartment blocks and dense purpose-built urbanisations here. Strict planning means that the areas natural beauty has been protected and developments are sympathetic to their natural surroundings. So the region is uniquely blessed with high-quality low-rise developments, low-density housing and traditional property allowing the area to protect its unique charm and traditional Spanish values.

search for a property for sale in la marina