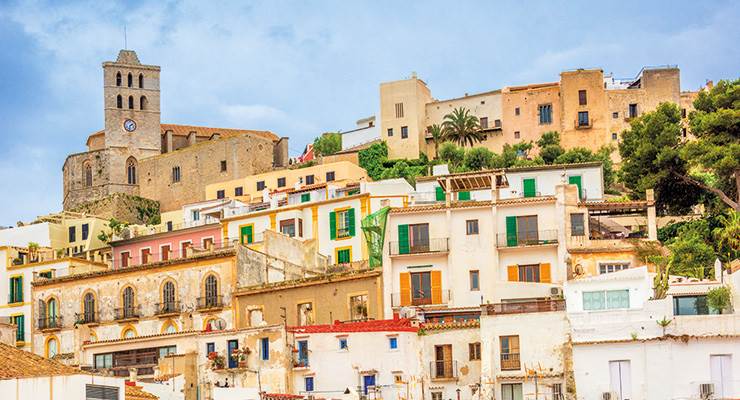 This summer the Balearic island of Ibiza is predicted to have smashed even more tourism and airlift records than last year. As other beach destinations in North Africa and Turkey have dropped in popularity amid security fears, their loss has been the Balearics’ gain, and British Airways’ new flights from London Stansted to Ibiza have been fully booked from the get-go in May.

The demand for private jets has also been higher than ever (up 8.5 per cent year on year), and the demand for yacht chartering has increased by 27 per cent in a year.

So are any of these visitors to the island buying property? It would seem that some of them are. Agents report that demand has increased considerably during the past two years – and because prices in the Balearics fell less during the global downturn than in the Spanish costas, they had less ground to catch up. Statistics from Tinsa, Spain’s leading valuations company, show that while the national average price for property in Spain fell 41 per cent between 2007 and 2014, the comparable drop was 29 per cent in the Balearics.

Further, stats from Idealista.com, a leading Spanish property portal, show that asking prices in the Balearics are now 21 per cent higher than at the top of the boom. No other resort region has recovered so well – not even Marbella. While Mallorca has been popular with wealthy buyers for many decades, clearly Ibiza has become a brand in its own right during the past five years or so, and this spans both ends of the market.

“The island’s image has moved upmarket. It has become a much more year-round location [British Airways now flies there during the winter] and we are seeing a new type of buyer – family-focused forty- or fiftysomething professionals who are bringing their children to the beach clubs, rather than going clubbing in San Antonio as they did 15 or 20 years ago,” says Cathy Ouwehand, international associate for Savills, the agent.

While sleek, contemporary villas have been constructed over recent years – and there are more schemes in the pipeline, especially around the south-west – and there are traditional farmhouses (or fincas), there are also at last some new apartment schemes that are catering for the lock-and-go market on the island.

New apartment schemes for all budgets

The White Angel development near the Pacha nightclub in Ibiza Town, the hub of Ibiza, sold quickly when it was released, and featured in this magazine, in 2012. The high-spec block of 66 apartments were sold off-plan, with prices from €400,000 to €1.5 million. The gated scheme offers an attractive shared swimming pool, gym, security and concierge, and attracts healthy rentals for its mix of stylish finishing, good location and extra services.

A range of British, Dutch and Italian buyers invested, along with some Spanish (there are many from Barcelona on the island), and the appetite for this sort of scheme has led OD Group, the developer, to launch a similar branded project in Talamanca, north of Ibiza Town. Also being sold off-plan, there are 54 180m2 threebedroom apartments, from €1.3 million to €1.9 million. It is close to OD Group’s new hotel, Ocean Drive Talamanca, and the sandy beaches.

OD Group also have a new apartment scheme in the popular Playa d’en Bossa (site of the trendy open-air beach club Ushuaïa, Nassau Beach Club and the Hard Rock Hotel) with prices from €280,000 for a two-bed apartment to €630,000 for a three-bed, three-bath 120m2 unit and sea views from the higher units. The average unit will be €450,000. This mid-range scheme, The Wave, will have 138 units and is second line to the beach.

“This holiday resort area has had a complete refurb, but now there are suddenly five-star hotels and destination beach clubs. Hotel prices have doubled and the area has been lifted to another level,” says Ouwehand. “This is a great area for a prime rental investment with services.”

OD Group also have a budget-range apartment scheme, Abc S’Olivera, at Puig d’en Valls, an inland area behind Ibiza Town, from €215,000. Handily near a supermarket, and with a large pool, these apartments seem great value for the location. “The upper units will enjoy good views of Dalt Vila in Ibiza Town whilst the ground-floor ones will have a garden,” says Carlos Noguera Wilson of OD Group. The three-bedroom ones measuring 90m2 with a roof terrace will be €368,000. “They will be completed at the end of 2018 and we have had a lot of local interest.” (All these schemes are available through Savills).

If you want a new villa, €1.5 million is around entry level, and Lifestylehouse.com, a developer of eco-friendly properties in Spain and Amsterdam, have recently begun building stylish new-build properties from this price point. They are building five in San Miguel, an area in the north of the island (which is more affordable than the southwest) within walking distance of the beach.

“They are sustainable, high-spec homes of 300m2 with terraces, each with their own pool,” says Gert-Jan Oepkes, head of office of Stirling Ackroyd, the selling agent. “The sustainability makes them unique – they don’t use the hollow-brick wall system commonly used in Spain that can produce cold, damp villas, but rather a polystyrenetype insulation. They are built with a modular system that makes construction efficient and fast.”

The floating-villa style is attractive, using lots of glass and covered terraces – very contemporary and creative in the design. They can be built to order – assuming you can fi nd a plot – elsewhere on the island, but Oepkes warns that in the south-west the cost of the plot would double the budget to €3 million.

“The south of the island is overpriced, and we are seeing many more buyers looking to the north for greater aff ordability,” he says, suggesting that in peak summer they might rent for €15,000 a week due to the strong demand for high-quality villas.

Santa Gertrudis, in the centre of the island, is also increasingly popular, especially for British families relocating (it is close to the best schools such as Morna International College). Again, €1.5 million is around the entry level for a quality villa, and Savills has a ten-bedroom resale example for €1.85 million, while Stirling Ackroyd has a new four-bedroom, three-bath villa for €2.2 million.