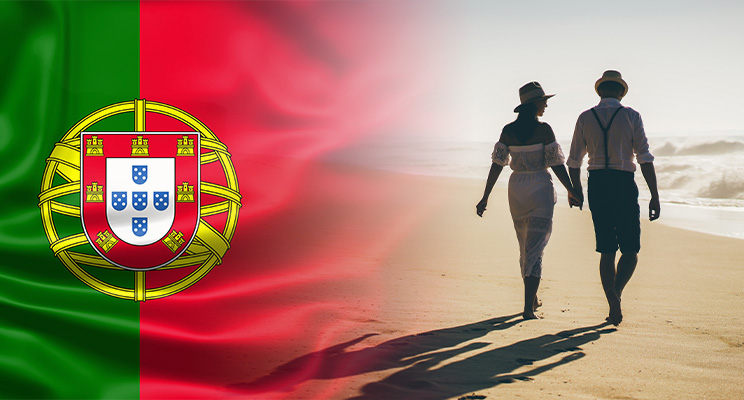 Moving to Portugal after Brexit

Retiring to Portugal with its beautifully laid back culture and affordable cost of living remains a popular aspiration for many Britons. After Brexit it will still be possible, and the Portuguese are very keen to ensure this happens.

The Portuguese government offers tax incentives to attract wealthy retirees and obtaining the right to residence is encouraged through the hugely popular golden visa scheme, which has been one of the most vigorously taken up in mainland Europe.

But what are the option for prospective retirees in 2021? First up, as things stand, you must have a visa/Portuguese residency if you wish to spend more than 90 days in each 180 in Portugal every year.

There are two main routes for retirees, depending on their spending power and specific requirements: the golden visa and the D7 visa.

If you can afford to buy a property then both routes might be options, but with the D7 visa, you don’t have to do so. Also known as the retirement and ‘passive income’ visa, the D7 is available to anyone who can prove they meet this minimum income requirement, which - for retirees - might typically take the form of a pension, rental income, dividends from shares or royalties.

For non-working individuals, the ‘passive’ source of income must be equal to, or more than, the Portuguese minimum wage (€750 per month) and you must be able to prove the sustainability of this income. On top of the main applicant’s income, adult dependents will need to prove 50 per cent of this rate.

The D7 visa is an entry visa so is managed by SEF, the Immigration and Borders Service. The application(s) must be started before you leave for Portugal, via the Portuguese Consulate in the UK (London, Manchester) and the application takes around 60 days to be approved.

You must generally have private medical insurance, but over-65’s moving to Portugal will continue to enjoy the same access to Portuguese state healthcare as Portuguese citizens, via the UK-issued S1. This is a healthcare entitlement certificate available to those in receipt of a UK state pension. But many expats opt to top up/supplement with a private policy too.

Once you have received this visa, you can enter Portugal and obtain your residency permit that will allow access other Portugal residents’ rights, permanent free entry and circulation in the Schengen zone of 26 European countries.

The golden visa also offers this free entry and circulation within the Schengen zone - which to many applicants is more highly prized than the property investment that facilitates it.

The qualifying amounts vary by location and type of property, from €500,000 in high-density areas cities such as Lisbon and Porto, to €400,000 in coastal low-density areas such as the Algarve, but with further reductions to €350,000 or €280,000, dependent on whether the property is an area of rehabilitation or needs renovation/is over 30 years old.

As of 12th February 2021, it was announced that the scheme will finish for properties in Lisbon, Porto and high-density coastal areas on 31 December 2021, with certain exceptions such as properties rated ‘touristic’.

Bear in mind that if you make Portugal your home, or stay over 183 days in a calendar year, you will become a tax resident, and liable tax on your worldwide income and gains, including state and private pensions.

However, on arrival, you will have the option to apply for the non-habitual resident (NHR) tax regime. Under that scheme, which lasts for 10 years, non-Portuguese pension and other forms of overseas sourced income are taxed at favourable rates.

Under the NHR scheme, you will only pay a flat rate of 10% tax on overseas pension income and enjoy a complete exemption on other sources of income such as interest, dividends and royalties.

It would be easy to assume that as ISAs and Pension Commencement Lump Sums are ‘tax free’ in the UK that the same will apply in Portugal when in this is not the case. It may, for example, be appropriate to encash ISAs while you are in the UK but not sell a second home until you arrive in Portugal.

With a total exemption of Inheritance Tax (IHT) between spouses and down to direct descendants, tax residence in Portugal offers the possibility to plan for mitigation of IHT and creates succession planning opportunities.

Pensioners can draw their state pensions whilst living in Portugal - with a few exceptions UK pensions will be uprated annually in line with UK benefits.

FIND A PROPERTY IN PORTUGAL