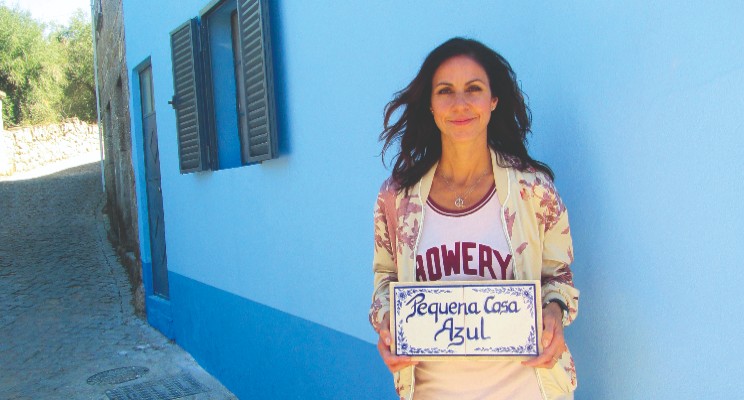 Julia Bradbury’s unbridled passion for the great outdoors has seen her dedicate her career to sharing the world’s best walks that have been showcased on her popular primetime programmes for the BBC, ITV and Channels 4 and 5.

The ex-Countryfile host’s most recent series around the Greek islands saw her return to her roots. “It was lovely to walk some old pathways. I’ve a strong affinity with the islands (my mum’s Greek), so for her and me to end the series on Chios, where my grandparents are originally from, was so emotional,” she tells me.

But in recent years, Julia, 49, has grabbed the headlines with her £10k home in northern Portugal. In 2017, Julia took on an ambitious ITV assignment to find a property abroad on a small budget. Having heard stories of people who’d bought holiday homes for small sums, she couldn’t believe there wasn’t a catch. “It was an interesting mix for me, as it was a blend of property and travel,” she explains.

Camera crew in tow, her epic European search for her very own £10k holiday home saw them research and study options. “I’ve done up a few houses over the decades, so I knew what I wanted to explore design-wise.” 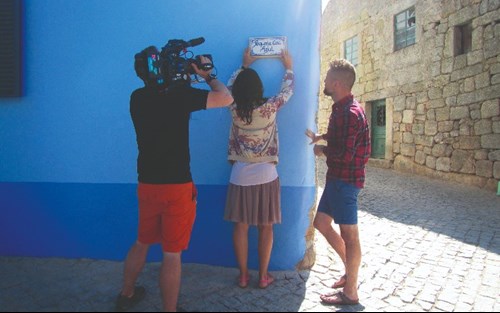 The search saw them scour boltholes in Bulgaria, Spain, Portugal, France and Hungary, offering temptations aplenty. “In Bulgaria, you can buy big houses for around £6,000, but they’re quite remote and need a lot of work.”

She also visited France’s Loire valley. “Lottie and Alex in Amboise renovated three troglodyte caves carved into the limestone cliffs, purchased for the bargain price of one euro, on the proviso that essential structural work to reinforce the roof was done within six months.”

But after holidaying there as a teenager, Portugal came top of her list. “I love the laidback pace of the country and landscapes, from stunning coastlines to pretty rural countryside. There are some great towns and cities, too - Porto, Évora, and Lisbon’s gorgeous,” she says.

Although her dream was an abode in the attractive Algarve, she soon ascertained that owning a piece of this particularly-appealing area was unattainable. “I have friends who live in the Algarve, which is, of course, a very popular part of the country because of the beaches and weather, and wasn’t an option for the 10k budget!” It’s hard to find an apartment on the coast for less than €150,000 now.

But the small coastal market town of Aljezur - on the border between the western Algarve and the Alentejo - had captured her heart. “I visited the adorable old shepherds’ huts which now form holiday cottages run by former Somerset lad, Richard,” she says.

He’d picked up two hectares of agricultural land in 2003. “His stunning treetop retreat’s a magical space under a solar-power canopy. He and a carpenter friend did the work for free so, including the £3.5k for the treehouse’s share of the land, the whole project came to just under £7k.”

After giving up on her Algarve aspiration, her research trip continued: “I drove up the entire length of Portugal, finding options in the middle, including a farmhouse I fell in love with, but the budget didn’t work out.”

Finally, the “find” came up in the north, where Julia fell for La Pequena Casa Azul (The Little Blue House), an historic rundown do-er upper in the tiny picturesque village of Aldeia Nova in the Guarda region, southeast of Porto. 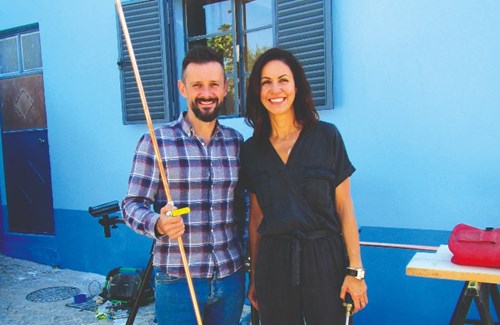 Formerly housing the village cobbler’s workshop and home, her idyllic cottage hadn’t been lived in since the 1980s, and was in dire need of some proper TLC. On plumping for her Portuguese postcard-perfect pad, she haggled over the price, persuading the seller to include its rustic furniture in the deal. “Because we also had to try to renovate the place within the entire 10k budget for the series,” she explains.

Unlike some European countries, Portuguese property deals come with relatively low transaction costs. “The house cost £5,700. Legal fees, most of the taxes and the notary came to around £1,360. But the real surprise is stamp duty - it’s a staggeringly cheap 0.8% - just £40! Altogether, that’s £7,100.”

Although this was “no ordinary purchase, due to cost and time restrictions”, she’s now the proud owner of a picture-postcard Portuguese property. “It’s the perfect hideaway,” she says. “An ideal escape from everything, and the neighbours are wonderful!” After its make-over the house is now worth around £18,000, reports Julia. The main appeal of the area? “It’s close to the stunning Serra da Estrela national park, a complete paradise for avid ramblers like me. That was the selling point - it’s near enough to a big town (for supplies) and on the edge of beautiful countryside for easy hiking access.” 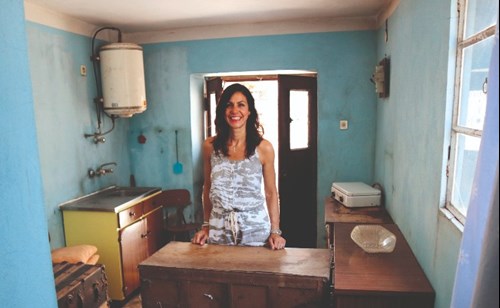 Creating a sustainable abode (on a budget)

Sustainability was hugely important for eco-conscious Julia when renovating, so he called on the TV presenter/designer/engineer Max McMurdo, a makeover and upcycling maestro who gives junk and cast-offs a completely new lease of life by converting them into exceptionally-useful products. “I knew Max could work his magic on it, and also recycle some of the furniture.”

Multi-award-winning Max has made his green mark on hit Channel 4 shows George Clarke’s Amazing Spaces, How to Live Mortgage Free, and Cash in the Spare Room, helping people turn their disused spaces into money-making holiday lets. 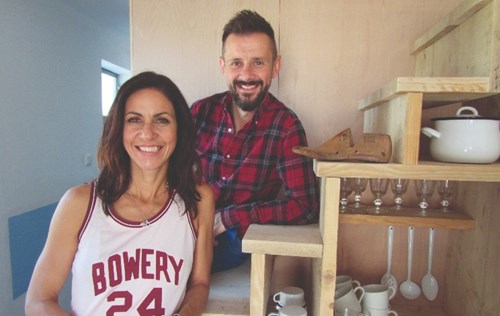 He ensured Julia’s revamp remained within the strict 10K budget.

The original layout proved particularly troublesome: “The stairs were steep and led to a narrow, gloomy corridor, which was the only access to two bedrooms, meaning walking through one room to get to the next! We removed the original staircase and created a central staircase, which doubled up as the storage units for the kitchen, and cost less than £400 to do.”

The once-cramped-and-gloomy downstairs bathroom is now a bright, serene space. “The new staircase separates the shower/loo from the-then living room/kitchen downstairs. We sealed up one of the external doors and used it as a window in the bathroom, leaving the main entrance on one side, directly into the living space.” 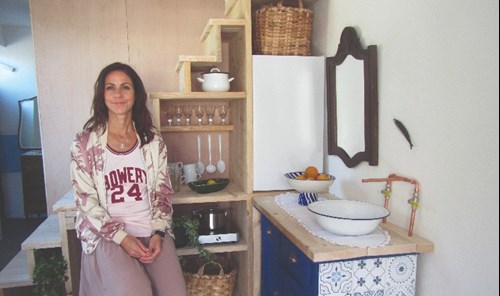 Upstairs, a clever pully-system partition separates sleeping areas. “There’s a double bed on one side, while the other half has bunk beds made out of old doors we picked up at a charity shop. So, you can now sleep four upstairs, although it’s cosy!”

Boasting beautiful vistas, the top floor looks out over a pretty cobbled street and olive groves. “The village is charming and quiet; there’s a church, a quiet local coffee shop where you can buy loo rolls and have a strong, black coffee. It’s authentic and about as far removed from urban chic as you can get! The baker drives his white van through the village every day at noon, honking his horn...”

But it wasn't all plain sailing

Structurally the cottage is sound, although it had a leaky roof, but a surprise during refurbishment was discovering a cesspit under the downstairs floor. “Little did I know, it wasn’t connected to the main sewage system so, under the toilet, were years and years of waste!”

Thankfully, help was at hand. “During the renovations and filming, the neighbours were a dream. They brought us food, helped with painting, let us use their electricity - and even a shower! They are so kind and helpful.”

With Max’s innovative approach Julia’s humble tumbledown cottage is now a chic, superbly functional holiday pied-à-terre that is now hosting visitors, and she’s thinking about renting it out as a writers’ retreat. 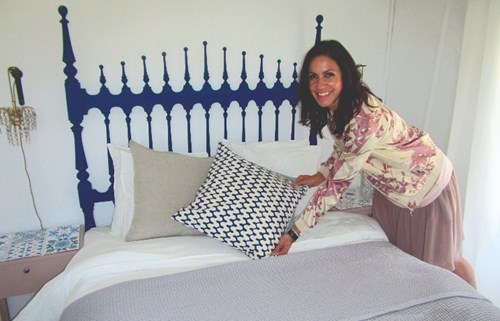 Gina, my sister, visited recently. It’s too small for the whole family to visit, so friends and family have been using it at different times,” she says.

Julia first lived with her sister Gina at a flat in Maida Vale, northwest London, when she moved there in her early twenties. “I was just about to get onto the property ladder and buy a small basement flat of my own when I got a job in Los Angeles, so I pulled out of the sale.”

But two years later, she was back in London. “Property prices had shot up. I did eventually buy a different basement flat, which I lived happily in for around 12 years, and after years of saving, bought a cute cottage in west London, where I stayed until I had children.”

It was with her sister Gina that Julia has set up the free online resource The Outdoor Guide to share her TV walks, including several Portuguese trails, and more. “There are many great walking routes. The mountainous Guarda district’s a fantastic area for hiking and taking in he scenery. I visit the nearby national park and the coast while I’m there, too.” 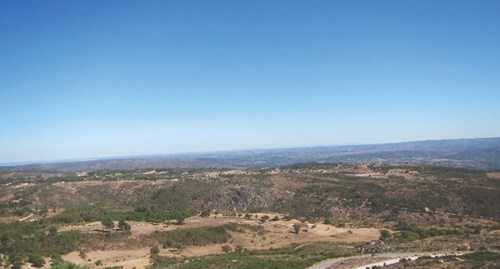 Foodie Julia relishes a few favourite Portuguese dishes. “I ate my way around Portugal while filming - including those delicious little custard tarts, Pastéis de Nata, which are everywhere.”

She says the nearby medieval town of Trancoso has some good DIY stores and decent restaurants, too, if you don’t want complete isolation (which I think we’ve all had enough of lately!). 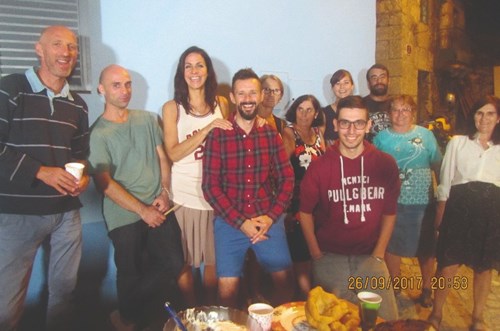 Julia’s looking forward to some R&R at her Portuguese pad and her kids enjoying a similar childhood to her own in Greece, with freedom to roam. “They love the outdoors - woodlands, beaches, sea and swimming pools. Just a 20-minute walk from the door is an old thermal spring. Our own village spa!” 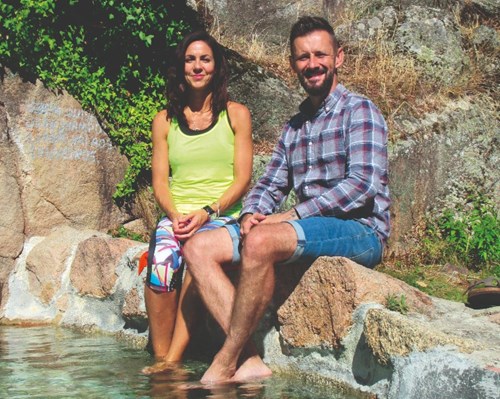 And could we soon be witnessing her purchase a wallet-friendly Greek holiday hideaway, following her idyllic island-hopping trip there? “I’d love to get somewhere in my homeland, but that’s a faraway dream at the moment...”

More tips and inspiration from Julia

The Outdoor Guide offers simple upcycling videos and tips to create things for the home: theoutdoorguide.co.uk/partner-news/julia-bradburys-10k-holiday-home/