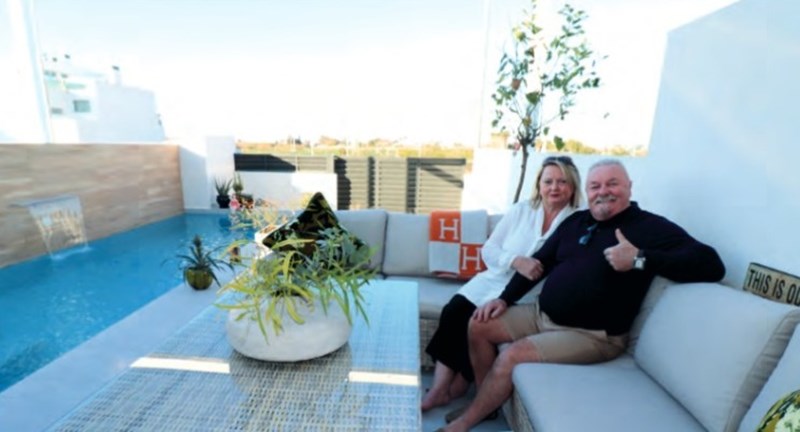 Cancer, floods and the 'B word' have not put off this Scottish couple from moving to Spain, reports Richard Way.

The shiny new townhouse Irene and William McLaughlan moved into last autumn is a far cry from the traditional villa they had envisaged having as their dream retirement home in Spain.

The Scottish couple from North Lanarkshire, who retired from jobs with their local authorities three years ago, moved into their completed property with daughter Stacey last October.

They signed the off-plan contract in January last year for the property set in a small boutique development in Rojales, next to the town of Benijófar in the Costa Blanca. Today their home is a modern four-bedroom, four-bathroom end-of-terrace townhouse with a private pool, which cost in the region of €280,000 (£237,650), including extras and buying costs.

“I love what we’ve ended up with but it’s totally different from what I had initially planned,” said Irene. “When we started looking at property online, we considered all types, including more Spanish-style houses.

“I always had in mind a traditional villa or bungalow and somewhere a bit more rural. It was only when we came out to Rojales for the first time, we realised how suitable the area and a new property here would be for us. And at the end of the day, we were thinking about what Stacey wanted too.” Through an unfortunate twist of fate, 40-year-old Stacey became pivotal in the McLaughlans’ property purchase. The couple were almost forced to ditch their Spanish dream when a few months after retiring Irene discovered she had breast cancer.

“I had to start treatment immediately but I was adamant that our plans would go ahead,” she said. “The Spain project helped keep me going and stay positive. Because I was incapacitated by my illness, it fell to Stacey to keep the hunt for our new home going.

“From attending A Place in the Sun property exhibitions in Glasgow, we had already chosen Vincent Real Estate as our estate agency and their agent Josh became a real life-saver for us. When Stacey was coming out to Spain on her own to look at property, Josh looked after her brilliantly, picking her up from the airport, dropping her at her hotel, basically just keeping her safe. Really, nothing would have happened without him.”

By the end of November 2018, Irene was able to fly out to Spain with William. Stacey had identified Rojales as the perfect area and Josh had shown her some options and introduced her to the local builder Tomás. “We met with Tomás, who I quickly trusted and felt comfortable with,” said Irene.

“Rojales, being just 15 minutes from the coast [Guardamar del Segura] and with a town centre we could walk to easily, seemed exactly what we were looking for. We looked at properties on some of Tomás’s other developments before visiting his new site. Stacey had already seen and liked it, and sure enough when saw it we decided it was just right for us.”

The McLaughlans returned to Spain in January last year, when they sat down with Tomás to confirm their preferred plot, run through costs and any extras, sign the contract and pay a deposit.

Their payment package included €25,000 stage payments and the final balance on completion. Being one of the first buyers at the development, which comprises about 15 units and has a rural outlook on the edge of Rojales, meant the site was empty except for a show home.

The benefits of buying this way meant the McLaughlans could create their perfect home by customising the design and fittings of one of the builder’s standard plans. They chose a four-bedroom, four-bathroom option, with two bedrooms on the first floor, one on the ground floor and one in the under-build. Their extras included upgraded gate entry, extra heating downstairs, a kitchen area on the roof terrace, a larger pool, two individual bathrooms on the first floor (rather than one Jack and Jill in which access is shared between two bedrooms), upgraded wardrobes, an extra window and an island in the kitchen. They also chose a north-facing property, because less sun is better for Irene’s medical condition.

“We met with the architect a few times to discuss our preferences and let ourselves be guided by him. Having seen a selection of different show homes on Tomás’s other developments, we were able to pick bits from each that we liked and where possible incorporate them into our own home.

“Originally, we set out wanting a detached property but we’ve ended up with a semi-detached house built exactly how we want it.”

After committing to their Spanish purchase, the McLaughlans returned to Scotland and put their two-bedroom semi-detached home on the market. It was sold by March. Their Spanish home was not due for completion until September, which effectively left them homeless.

In the interim they decided to move to Spain and rent there, rather than stay and rent in Scotland. Once again, their agent Josh stepped up to the mark and found them a suitable rental property in Orihuela Costa. But another stroke of bad luck meant they were back in Scotland after four weeks.

“We got caught in the terrible floods they had there,” said Irene. “We had to be rescued by the fire service and spend a couple of nights in a refuge. At that point, and especially considering my health condition, we decided the best thing was to go back and stay with my sister in Scotland for a bit.

“But it wasn’t long before we returned to Spain and rented a flat in Benijófar, somewhere nice and high and close to our new home. Not only could we watch it being finished but we were able to start buying furniture, ready for when we could move in. We didn’t bring much at all with us from Scotland.”

Despite the awful weather conditions, the completion of their property was delayed by only a month. When they moved in, they became the first residents at the development.

“It does mean we’re living on a bit of a building site at the moment so it can be noisy, which is something you should think about when buying off-plan,” advised Irene. “But most of the plots are sold now and the owners are very multicultural. We’ve met others, including Belgians and French. And one of our neighbours is a Welshman.”

Fortunately Irene is in remission and the McLaughlans are settling happily into their new life in Spain.

“I am entitled to Spanish state healthcare through William, who qualifies because he is 67 and I’m still under 65,” said Irene. “We looked at private healthcare, but because it hasn’t been five years since I had cancer it wasn’t worth doing for me. I don’t know whether I’ll go back to Scotland for my next check-ups or get it done here.”

Were they ever put off moving because of Brexit? “Brexit will come and go,” said Irene. “But if you want to make the move you should make the move. We get our pensions paid out here, and yes it can go up and down with the exchange rate, but we have good pensions and we manage our money well.

“We’re now on the padrón (electoral roll) and registered for healthcare. We’ve been here for more than six months and got bank statements to prove that we’re living here – our next step is to apply for our residency.”