To Buy a Property in Lisbon OR Madrid? 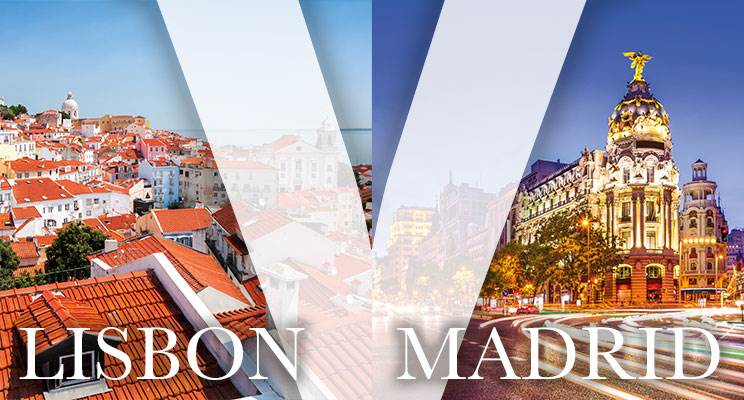 Iberia's two capital cities, Lisbon and Madrid, have much in common. Both head up countries with hugely popular second-home destinations, both are easily reached by regular low-cost ﬂights from the UK and both oﬀer culture, history and stirring architecture alongside blue skies and warm weather for most of the year. Perhaps best of all, both oﬀer interesting value whether you’re buying a two-bedroom apartment or sampling the exceptional local food and wine. With all this to love, how do you choose between the two?

A relaxation of residential lease laws in 2012 kick-started the refurbishment of Lisbon’s beautiful historic buildings. Developers renovated old properties and built new, modern apartments, slowly rejuvenating the city centre. There’s still much work to do but already home buyers have some appealing options.

It’s impossible to ignore the growing buzz around Lisbon. Portugal’s hilly capital is pulling in a diverse crowd thanks in chief to its dynamic tech industries and vibrant food scene. Techies have been moving to Lisbon for some years, wooed by aﬀordable prices and a winning lifestyle. Every November the city hosts Web Summit, the largest global tech conference, attracting 60,000 attendees and a glittering roll call of speakers from Elon Musk to Bono. The city is home to Factory Lisbon, a newly opened vast start-up campus beside the Tagus River and this year Google announced plans for an additional 500 jobs at its new support centre on the outskirts of Lisbon.

The business-minded Portuguese government, keen to encourage this growth, oﬀers a 10-year tax-free welcome to existing businesses relocating there.

Until recently Madrid has been largely eclipsed by Barcelona as the world’s favourite Spanish weekend destination but that could change as the city sees a rush of new ﬁve-star hotels and residences. Plus, some agents are reporting a slight drop-oﬀ of interest in the Catalan capital with the independence issue bubbling away.

But what a city Madrid is: a leading ﬁnancial centre poised to capture any fall out from London after Brexit and a gastronomic pleasure dome full of vigour and vim. Madrid has magniﬁcent parks, three of the world’s greatest art museums and is both elegant and laid-back.

The monumental airport already acts as the main gateway between South America and Europe and buyers from both continents are looking with interest at the good value and sunny lifestyle on oﬀer. Parts of Madrid’s centre is being pedestrianised and a new business and residential neighbourhood is being created at Chamartin in the north adding oﬃces, 11,000 homes and a new high-speed train station.

The growing clamour around Lisbon is reﬂected in rising property prices. Prime homes have almost doubled in price since 2016, up from €5,000 per square metre to €9,500 and reaching €14,000 in parts of super-smart Chiado.

Yet ﬁgures from agent Savills show that mainstream prices are still just a third of those in Madrid and 15 percent of those in London. Lisbon’s buoyant tourist market, up 73 percent since 2006, means that short-term rentals can produce yields of 6 percent. Portugal’s Golden Visa, granting non-EU nationals an EU visa if they invest a minimum of €500,000, has proved very successful for Lisbon property while the governments Non-Habitual Resident scheme oﬀers signiﬁcant tax savings to those relocating to Portugal and has attracted many EU buyers, especially the French.

In 2017 property prices in Madrid rose over 12 percent year on year according to the Spanish Statistical Institute while government ﬁgures show that transactions of new developments rose 53 percent, almost double of that in Barcelona.

It’s only recently that developers have begun to use prestigious architects and designers, incorporating leisure facilities such as gyms and pools to their projects and adding a sophistication with true global appeal. Knight Frank’s latest Madrid Market Report shows residential prices in Madrid as less than half of comparable cities such as Vienna, Paris and Zurich and it is this price gap with other European cities combined with the forecast uplift potential over coming years that has brought international investors.

Blue skies, warm year-round temperatures, top-quality food at aﬀordable prices and a dynamic vibe are the main pillars of Lisbon’s golden lifestyle. It’s an old, historic city but feels young and fresh thanks to the on-going investment and young IT crowd.

Skilled Portuguese chefs have transformed Lisbon’s international reputation. Book a table at one of award-winning José Avillez’s restaurants or tour the city’s excellent food markets and you soon see that Portugal’s cuisine is about much more than just sardines and vinho verde.

Lisbon has a wide choice of international schools and well-regarded public health care. Good golf courses and wonderful surﬁng beaches are within thirty minutes: this is a city where workers go surﬁng in the lunch hour.

Further aﬁeld lies prime holiday territory. The Algarve’s golf courses and Atlantic beaches are around two hours by car while the spectacular beaches and countryside of the Alentejo and the vineyards of the Douro Valley are within one hour.

Madrid is Europe’s highest capital city and the weather in winter reﬂects this with crisp blue skies and often chilly temperatures. Yet the city avoids the worst of the searing summer heat of the south and averages ﬁve hours of sunshine daily even in the depths of winter.

Madrid is low-level and green. It is certainly Spain’s most international city and its central location in the country makes it wonderfully well connected. Whether you want to reach Barcelona to the east or Marbella to the south, nothing is more than 2.5 hours away thanks to Spain’s much-praised AVE high-speed train.

Then there is Madrid’s legendary nightlife. Residents love to socialise, rarely beginning a night out before 9 pm and continuing long past midnight with Madrid’s dynamic and aﬀordable food scene providing plenty of reasons to eat out. Local food markets are a part of Madrileños daily life and there are plenty of intimate tapas bars oﬀering top quality fresh food at surprisingly aﬀordable prices.

It’s perfectly possible to combine high-quality property with budget-beating prices says Lloyd Hughes of agent Athena Advisers. Casa d’Ourique in Campo do Ourique has one and two-bedroom apartments from €300,000. This is Lisbon’s “Nappy Valley”, filled with good schools and shops, close to popular Principe Real and great for long-term investment and rentals.

Or consider Calçada do Marquēs in Santos where the studio and one-bedroom homes start from €268,000 with Athena Advisers. Santos is a fast-evolving riverside neighbourhood next to upmarket Lapa but with prices 40 percent less than the centre.

Property prices peak in Salamanca and Chueca but look for better value to Lavapiés to the south, Malasaña to the west and La Latina, home to a Sunday antique market.

Rod Jamieson, Director of estate agency Lucas Fox recommends Tetuán, ﬁve miles away: “Tetuán, traditionally regarded as a working-class barrio, has recently beneﬁtted from an upswing of gentriﬁcation, winning interest from buyers and investors drawn there by the enticing combination of its central location and comparatively reasonable prices.”

Large, super-smart one to three-bedroom new-build apartments at Tetuán Apartments with garages and high-quality ﬁnishes start from €461,000 through Lucas Fox.