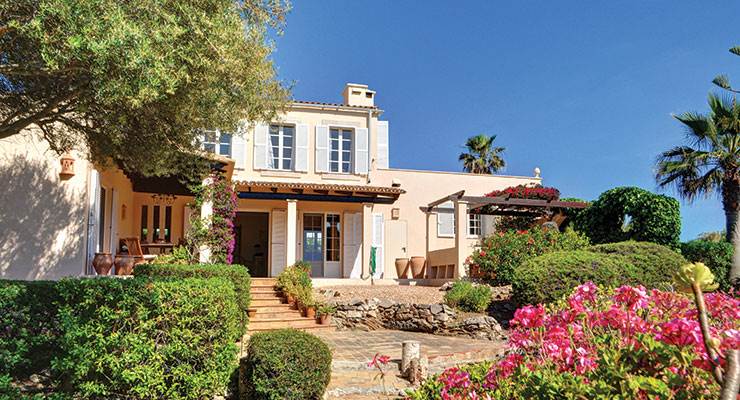 Just like its Balearic neighbour Ibiza, Mallorca looks as if it has smashed tourism records again this summer. In 2016 there were 11.5 million visitors and there is talk in the tourism office of it nearing 15 million this year. With Palma air traffic control busier in May than it was in August last year, all the signs suggest this might not be just PR puff.

In property sales it is in another league to Ibiza, with prices rising across all levels of the market and transactions up 50 per cent year on year. As security-conscious holiday makers who might have gone to Turkey, Egypt and Tunisia add to Mallorca regulars, so do property hunters, and the three main interested nationalities are Germans, Britons and Scandinavians, according to Marc Pritchard, sales and marketing director of Taylor Wimpey España, the developer.

“The Germans are going mad for Mallorca at the moment: I haven’t seen this sort of appetite from them since the mid 1990s,” he says. “Everything we have is selling in Mallorca right now. We have been increasing the prices on our new schemes between the release of their first and second phases.”

While the bulk of Taylor Wimpey’s schemes in Mallorca are mostly at the affordable end of the scale — in the €250,000-€300,000 range along the east coast — Engel & Völkers, the high-end agent, report a similar mix of clients, although 40 per cent of them buy in the more expensive south-west of the island. “Last year the average sale in the Puerto Andratx area was €1.2 million, and there were more sales in that corner of Mallorca than in the whole of Ibiza for Engel & Völkers,” says Hans Lenz, managing director of the agent’s team in this region. “Property prices are already higher than at the market peak in 2007.”

Mallorca appeal on several levels. Less than two and a half hours away by plane, it is well-connected (Palma airport has the most frequent arrivals from the UK to Spain), and offers first-class infrastructure: it is much more highly evolved than Ibiza. There’s also amenities such as its well regarded medical facilities and the properties for sale.

While the area around Palma is superb for year-round living, if you want an active holiday there are dozens of marinas, golf courses and superb sports facilities such as Rafa Nadal’s vast new tennis academy that is attracting pupils from around the world, as well as the Tramuntana mountains which are a favourite training ground for cyclists.

If you want beaches there are hidden coves or great swathes of sand, there’s glitz and glamour at Puerto Andratx (where Brad Pitt and Angelina Jolie were rumoured to have bought a villa this summer) and in the fast-evolving capital, Palma; or there are traditional towns and fishing villages that remain charmingly unspoilt in a way that many of the southern costas of the Spanish mainland have not.

Property-wise, for greater value you generally need to look at the east and north-east coasts — the latter being the most affordable of the regions, according to Engel & Völkers, as it is the furthest from the airport one can get and is less rich in amenities. However, that is beginning to change with the aforementioned tennis academy in Manacor, a new American school associated with it, and a new Park Hyatt five-star hotel in Cap Vermell, with a country club.

But there are also still a few pockets of the south-west where your can find greater (relative) value, too. Here we pick out a few places where you might wish to invest on the island.

With idyllic bays, fishing villages and beaches backed by picturesque hills, the south-east corner offers everything one could want for a Mediterranean holiday, and is between 30-45 minutes from Palma airport. As you head north up the east coast it gets ever more tranquil and the coastal city of Porto Cristo is one of the hotspots, along with the medieval cities of Arta, Capdepera and Son Servera.

There is one property left at Taylor Wimpey’s Costa Beach development at Port Vell, a little further north up the east coast: a two-bedroom, two-bath unit for €405,000 with spacious terraces and direct beach access. Parking is provided on both projects.

If you have deeper pockets, there are new villas (already built) at the new Cap Vermell development next door to the new Park Hyatt Hotel, just another short skip up the coast towards Capdepera. Here you can buy a large contemporary-style villa from €3.76 million with (paid) access to the country club, Pula golf course and the charming little beach at Canyamel.

Porto Colom: it ticks all the boxes

With infrastructure, the charm of the “real Mallorca” and superb beaches, Porto Colom, back down the east coast a bit is worth investigating. When the highway is upgraded to an autoroute between Llucmajor and Campos, the journey time from Palma should reduce from the current 40-45 minutes.

“Porto Colom attracts both UK buyers, Scandinavians, mainland Spaniards as well as people from Palma (like me) with a weekend townhouse in the port,” says Folke Sarnmark of the agent Mallorca Houses. “They don’t come here for trendy shops or restaurants, as found in Palma, but the green landscape of rolling hills — it’s the Tuscany of Mallorca — and some of the best beaches on the island as well as being a year-round place.”

He says you can get a quality villa for €850,000 (the price of an apartment in Puerto Andratx) or there are lovely fincas or fishermen’s houses, such as one that is currently listed with his agency, at €600,000. It has three bedrooms, has been recently refurbished, and is within walking distance of the marina, restaurants and beach.

Also for sale is a new four-bed townhouse for €880,000 with a spectacular roof terrace; a charming two-bedroom Mediterranean villa that looks rather like something on the French Riviera (pictured on the previous page), for €850,000; or a south-facing penthouse in a small complex with harbour views for €695,000. Meanwhile Chesterton International have a twobedroom penthouse for sale in a complex for €299,000.

Close to the new WTA tennis facility in Santa Ponsa in the south-west is an unusual new development offering 13 bespoke villas being sold off-plan. Pueblo is the creation of developers Domus Vivendi, who are behind various successful projects across the Balearics (and Germany).

It is a boutique development of three to four-bed properties (220m2) designed to recreate traditional village (pueblo) life. Its is designed to be a family-oriented scheme where neighbours meet around the central pool and sunbathing areas. Nearby are supermarkets, a golf course, Santa Ponsa centre, the superyacht marina complex (with boutiques and restaurants) of Port Adriano, and the 16 courts of the new Santa Ponsa tennis club in Calvià, mentioned above. The airport is half an hour away.

Prices of the off-plan villas, which will all offer the privacy of terraces or balconies (four of which have already sold), start at €1.95 million (pueblo-elements.de). Owners have the choice to have a small private pool built too.

“Santa Ponsa is more affordable than Andratx and Bendinat but a good, established area,” adds Lenz. “You’ll find newer projects like Pueblo that you won’t find in those areas either, due to lack of space.” He says a 300m2 three- to four-bed villa with a pool in Santa Ponsa tends to cost around €800,000 to €1.2 million — or €2.5 million if you want a sea view.