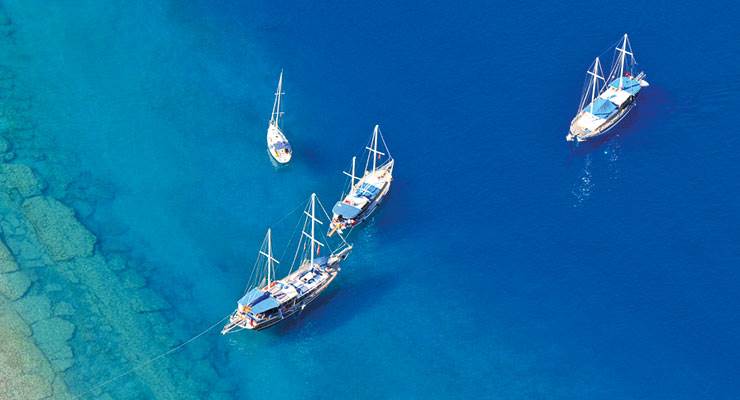 On the coast of south-west Turkey, between Gocek and Kalkan, the Fethiye area (Mugla province) is most easily reached from Dalaman airport, inside a one-hour drive away along the D400 highway. Olu Deniz (also known as Olüdeniz) is south of Fethiye, reached by a road that passes through the mountains and the two small resorts of Ovacik and Hisaronu.

So what is Olu Deniz? One of the most photographed beaches on the Med! The secluded sandy Blue Flag Beach is at the mouth of a blue lagoon, famous for its shades of turquoise and aquamarine. The lagoon is a protected nature reserve and area of outstanding natural beauty but it offers calm and shallow waters ideal for families with young children.

Olu Deniz may only be a small town within the Mugla province of Turkey, but it is a gem of a place with so much to offer. Olu Deniz is famous for paragliding and there is a multitude of restaurants and bars fringing the beach front boasting some spectacular views and serving some delicious local cuisine from seafood to kebabs and much more.

And nearby Hisaronu and Ovacik?

The resorts of Hisaronu and Ovacik are situated nestled in the mountains between Fethiye and Olu Deniz. Out of the two resorts Hisaronu has the most restaurants, bars and nightlife with Ovacik hosting more hotels, apartments and villa accommodation with a handful of eateries situated adjacent to the main road. Hisaronu, the livelier of the two resorts and once a hamlet with a few goats and livestock roaming the streets, has become a very popular resort especially for the British and is cooler in the high summer months due to its mountain location.

What does Fethiye offer?

A marina town steeped in history, Fethiye is a thriving market harbour town with a stunning marina mooring some fine-looking yachts. The ancient name of Fethiye, Telmessos has a vibrant history; with its picturesque town that has been a popular destination for tourists from all walks of life for many years. The town is surrounded by mountains and has its own distinctive character giving this resort a very Turkish feel. Fethiye has some wonderful eateries with many serving local cuisine such as seafood or pide (Turkish flat pizza bread) as well as an abundance of Turkish meze.

The fish market, found in the centre of the old town has some wonderful fresh seafood that can be enjoyed at one of the many restaurants flanking the market. Fethiye peninsular has many magnificent bays and the port is popular with celebs and their yachts. Calis is the large, flat bay area in the town where Daniel Craig was filmed emerging from the sea as James Bond in Skyfall.

Just 8 km south of Fethiye, nestled in the mountains, is an ancient abandoned Greek village, a unique and fascinating place that is steeped in history. This deserted village of Kayaköy consists of ruins of ancient Greek houses and lies between the foothills of Olu Deniz and Fethiye. The ancient so-called ghost town of Kayaköy (Karmylassos) is now preserved as a museum village; the abandoned Greek stone houses leave an eerie feeling of desolation after the population exchange with Greece in 1923. Kayaköy was featured in the bestselling novel Birds Without Wings, written by Louis de Bernières and more recently the Water Diviner film directed by and starring Russell Crowe.

Meanwhile nearby Uzumlu offers a glimpse of authentic Turkish life. Uzumlu is an unspoilt traditional Turkish village that grew up around grape-growing. Situated about a 20-minute mountainside drive from Fethiye, the property there tends to be the more traditional stone build that blends with the beauty of the rural area. One of the highlights of the year in Uzumlu is their famous mushroom festival, a three-day affair of traditional folk dances and entertainment.

With competitive and very reasonable priced houses, especially in comparison to its European neighbours, now is a good time to invest in the south-west area of Turkey. Wonderful coastlines along with steady value growth offer you an ideal property in the sun. The buy to let market is very popular in this area of Turkey, especially in the Ovacik and Hisaronu areas where the rentals market is very popular with British, Europeans and the Turks. The area offers a vast collection of properties from two-bedroom modern apartments to 5/6 bedroom luxury and contemporary villas. Prices range from £45,000 for an apartment, from £99,000 for a private villa with pool and up to £350,000 for a brand new large luxury villa.

Fethiye, Calis and Uzumlu properties tend to be cheaper properties on the market with Ovacik and Hisaronu being slightly more expensive. These areas are more desirable being closer to the famous beach resort of Olu Deniz, and have a higher rental return. The areas of Ovacik, Hisaronu, Calis and Uzumlu are very popular for retirement properties and are especially popular with the British, there is a strong ex-pat community in this area of Turkey with many activities such as walking days making the most of the area, and an affordable cost of living too.