Dreaming of a new life overseas? You're not the only one. 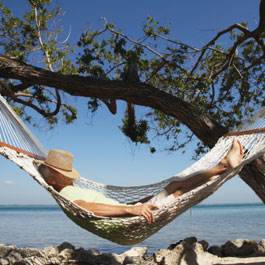 Dreaming of escaping to a Caribbean beach or the Floridian sun?

Whether it's a case of the January Blues, post Christmas marriage breakdowns or the wonderful opportunities offered on our screens daily with the new series of A Place in the Sun's Winter Sun, it seems many of us have decided we want to move abroad.

A new study from a visa application help website in the UK has revealed a 121 per cent rise in visa applications in the first week of January from Britons looking to leave the UK; up from the same period last year.

According to previous site statistics, January is historically the most popular month for people looking to leave the country, but 2014 has so far seen a bumper number of enquiries with 'relationship breakdown', being 'fed up of the weather' and 'January blues' all offered up as decisive factors.

The statistics, compiled by www.IXPVisas.com, were released in conjunction with a poll of 1,025 visa applicants all aged over 18 and all of whom expressed interest in moving abroad during January.

"We always see a spike of people looking to emigrate at this time of the year. With nothing much to look forward to in the first quarter of the year, a new life on a beach somewhere with sunshine blazing down is obviously an appealing prospect."

The study has revealed some of the main reasons behind people wishing to escape to different climes during the first month of the year.

Respondents to the study were initially asked, 'Why have you opted for January to look at moving abroad?' to which the main reason, at 43 per cent, was that it was a 'new year and a new start' so therefore a good time to look at moving away.

Twenty-nine per cent of respondents said that they wanted to celebrate Christmas with family before emigrating.

A further 24 per cent said that it was because there was 'less competition with graduates' at this time of year when looking for jobs abroad.

Focusing on those who admitted that their decision to move abroad was more of a knee-jerk reaction to 'relationship breakdown', 'poor weather' or 'January blues, the majority, 42 per cent, said that they had 'savings' and that it was within their means, whilst 27 per cent said they had enough to 'set themselves up' before looking for work. A fifth, 21 per cent, claimed to have asked family members for help financially to fund their move.

Wondering where to move? Seek further ideas and inspiration in our Emigration news and features section.

Do you get free healthcare if you live and work in Spain?