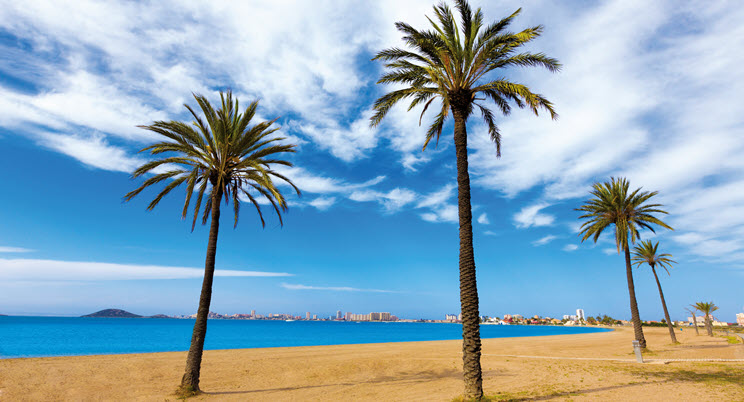 The Costa Calida (English translation: warm coast) is the approximately 250 km stretch of Mediterranean coastline of the Spanish province of Murcia. This region has a micro-climate which features comparatively hot mean annual temperatures, hence its name, and a relatively low annual rainfall. The Costa Calida cradles one of Spain’s greatest coastal treasures – a huge natural salt water lagoon called the Mar Menor (meaning ‘little sea’) which is separated from the Mediterranean by a 22-kilometre sandy strip of narrow land.

The Mar Menor is a magnet for wildlife, water sports enthusiasts and an army of devotees who swear by the healing powers of its mud and minerals. The lagoon is a rich source of a variety of minerals such as calcium, magnesium, iodine and bromide. Their curative properties are believed to ease all sorts of ailments from rheumatism and arthritis to sore throats and gout. You can soak in the healing salt water and natural mud baths free of charge or head for one of the many hotels which line both sides of the Mar Menor and offer a range of natural therapies in swish spa centres.

Besides its alleged healing powers, the Mar Menor is also an ideal place to learn to swim or master a new water sport. The warm and tranquil water of this sheltered lake has an average depth of 1.7 metres and is about half a metre deep around the shoreline. And there’s plenty of space for everyone in this natural water park which is 26 kilometres long and 1.5 kilometres at its widest point.

The newly opened (in 2019) airport of Murcia International (also known as Corvera) is a very easy connection to the towns and resorts of the Mar Menor within 30 minutes of it, with value flights options increasing all the time and buses offering transfers from the airport. The airport of Alicante offers even more routes and is only about 1 hr to the Mar Menor.

The Mar Menor is peppered with traditional Spanish villages which have been relatively untouched by tourism.

There you will find bars and restaurants offering excellent value ‘menus del dia’ (menus of the day) and tasty tapas, including Spanish snacks such as Manchego cheese, chorizo sausage or squid. If you want to spoil yourself then you will find some of the best meat and fish restaurants in Spain with wines to match, set in luxurious locations, or during warmer evenings served right on the beach with silver service whilst you are barefoot. International cuisine is also on offer. 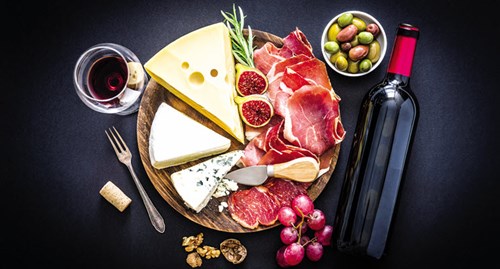 What else to do?

The region of the Mar Menor is home to some of the best golf courses in Spain including the stunning luxury of Las Colinas Golf & Country Club with its own private beach club and the established and very popular Roda Golf Resort which is fabulous family resort close to Los Alcazáres, in fact there are over 30 golf courses within an hour’s drive of each other and collectively they boast some of the top sports and leisure facilities to be found in any self-contained tourist complexes in Europe.

Nature lovers will want to head out to the beautiful and unspoilt Regional Park of Calblanque, near the Mar Menor, where deserted beaches, cliffs, dunes, salt flats and hidden coves can be found along a 13-kilometre stretch of protected coastline. The area is crisscrossed by numerous hiking and cycling routes which allow access to one of the few remaining untouched coastal areas of mainland Spain.

Property in this region is on average 55 per cent cheaper than comparables on more popular Spanish coastlines. You can still get property within walking distance to amenities and beaches for under £100,000. For example, you can get fully furnished two-bedroom ground floor apartments with communal swimming pool on an 18-hole golf course with security gates, club house, restaurant and bar from only €110,000, within 2 minutes’ drive to the beaches of the Mar Menor.

Brand new two and three bedroom apartments and houses start from only €130,000, going up to €290,000 for a large three-bedroom villa second line to the golf course and with private swimming pool. For those looking for the ultimate in luxury, near an award-winning golf course with private beach club, it’s possible to buy properties from under €250,000 set in location that rivals anything in Spain including the world famous La Manga Club Resort in the hills of the Mar Menor coastline.