How Sardinia cast its magical spell on me 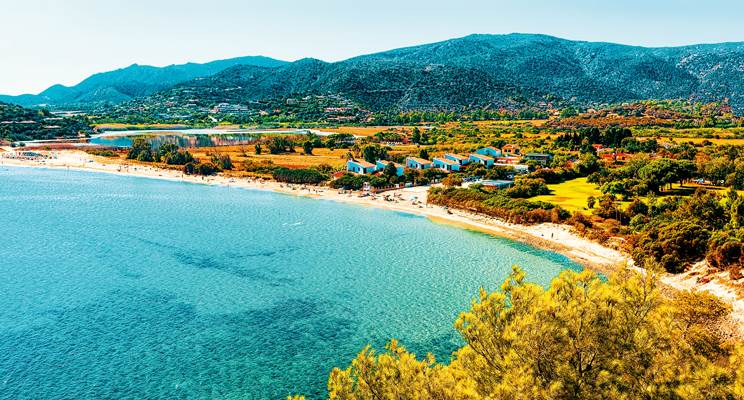 The Harry Potter actress and author Sara Alexander describes falling in love with the Italian island as a child.

Yearning for a place rich in history, craggy with unspoilt wilderness and surrounded by the kind of turquoise sea that makes you catch your breath? The island of Sardinia is your place. It’s a jagged isle that has a piece of my heart firmly wedged somewhere in its hidden cerulean coves, or among the wild fennel and thyme-scented brush. My mother left Sardinia as an adventure-ready 16-year-old, following her sisters’ and brother’s footsteps to late 1950s London, at a time when the influx of Italians was met with a mixture of curiosity and suspicion.

My summers were spent along its fine sandy shores from before I’d even been alive a year. School was out: I boarded the plane the following day. The glow of the place is etched into my marrow: the dusty, cobbled back streets where I learnt to argue in Italian with my cousins and their friends, the beaches that lured me into its waters until I was yelled at to get out because it was time for lunch – a cultural institution in and of itself, usually involving more aunts and uncles than I could count and food enough for Christmas.

Sardinia cast its spell before I could speak. It’s the place that has gifted me stories in all forms, a few of which have woven out into two of my first three novels.

These days - 42 years later - I scuttle back as often as I can from my home in Cricklewood in north-west London. When budget airlines included the island on their itineraries it was a revolution for tourism, as opposed to the once-a-week charters of my childhood. Working as an actor (I leant on my Italian roots playing the grumpy waitress in the infamous café fight scene of Harry Potter and the Deathly Hallows: part 1) means my schedule often offers flexibility to jet away. Soaking up homeland minerals in its crystal-clear seawater certainly refreshes my writer’s imagination too.

We – my husband, Cory, and two children, aged seven and 12 – stay at a villa, which is jointly owned by a small team from a Sardinian family. It is split into four apartments and lies in the hamlet of Loddui, on the hills surrounding the town of Budoni, a half-hour south of the east-coast airport of Olbia. Most of the celebrity crowd land and travel north from here to the Costa Smeralda (the aptly named Emerald coast) where they stay in ludicrously priced, picture-perfect resorts that, in my opinion, do not give an authentic flavour of what the island is about.

Sardinians are diffident by nature, but molten at the core. Not an atypical characteristic of islanders perhaps, yet Sardinia remains very much separate, in atmosphere and people, from other Italian islands. Don’t seek the vast majesty of Sicily’s landscapes: this is a rocky terrain, with a different patchwork of history and a great deal to see and experience beyond the breathtaking coves.

Often tourists cling to the areas close to the airports, but I recommend heading further south along the east, or indeed west, coast for more reasonable deals on rentals or holiday homes, with the same, if not more, beauty than the luxury resorts farther north.

When my Sardinian relatives jointly purchased the villa in the late 1980s, the hamlet was no more than nine houses and a couple of small shepherds’ cottages. Properties then, even the larger villas, did not fetch anywhere close to €100,000. Now, the hills are being more developed but in no way near the onslaught that overtook the coast of southern Spain in recent decades.

Planning permissions are tough to come by, especially with Italian and regional laws changing as often as the British weather. Nowadays, buyers can get hold of one- or two-bedroom apartments in and around Loddui for about €115,000 and up to €230,000 if the property is on a small compound with a pool, or based in one of the nearby picturesque towns like San Teodoro. This lies 25 minutes south of Olbia airport and has a bustling night market and gorgeous beaches in town and stretching out from there, such as the jaw-dropping Lu Impostu.

If you’re looking at a sole-occupancy property, such as a standalone villa, you can expect to pay more than €150,000 if you head to the smaller towns. This can reach over €550,000 for larger properties or those with their own pool. I spotted a gorgeous whitewashed fisherman’s cottage in Budoni this year listed for €90,000, but this would suit an intrepid tourist longing for a character property.

The good news if you invest is that tourism is still a healthy market and apartments can fetch upwards of €700 a week in high season. If you’re prepared to liaise with local agencies and set aside a generous percentage of your rental income for local town taxes (a whole new level of bureaucracy) then it can prove a wise move. I would advise buyers to look into the countryside surrounding towns along the coast, because you’ll get more space and a respite from the summer crowds.

Italian bureaucracy is knotty, as ever. I recommend several experiences of renting before choosing where to roost. Agrustos, Ottiolu and Loddui are all small towns that offer picturesque buildings – part of planning permission rules include strict guidelines on design, down to the exterior paint hues.

If this hasn’t yet whet your whistle, allow me to tempt you with one of my mother’s guarded recipes. Sardinia’s heart is touched through your taste buds. It’s how these islanders let you know how they feel and how they spoil you with the hospitality for which they are famous.

In Sardinia, vegetables are revered for their medicinal properties and flavours. This dish is simple, but hearty enough for a main. It’s also pretty lush the next day.

5 fresh artichokes washed and cut into quarters. Take time to remove the furry centre when they are in quarters. Do not discard the luscious heart, though – just the pointy inside section
5 potatoes, peeled and cut into wedges.
2 garlic cloves
2 tablespoons good olive oil
Salt & pepper to taste
2 fistfuls of fresh flat-leaf parsley, coarsely chopped
200ml of water in a jug

1. Heat the olive oil in a wide pan with a good-fitting lid
2. Add the artichokes and potatoes, coat evenly in the warm oil.
3. Add the garlic, parsley and salt and pepper.
4. When the pan gets nice and hot, add the water.
5. When it reaches boiling point, put on the tight lid and reduce the heat to a simmer.
6. Turn off the heat after 15 minutes. Do not remove the lid. Let the veggies infuse.
7. Enjoy with fresh crusty bread to mop up all that delicious garlicky juice and perhaps a glass of crisp white vermentino wine from the island.

A British-Sardinian actress and author born and raised in London. Sara has published two novels with HarperCollins, each inspired by her roots in Sardinia where she regularly returns. Her next novel, The Last Concerto, is set between Sardinia, Rome and Sicily.