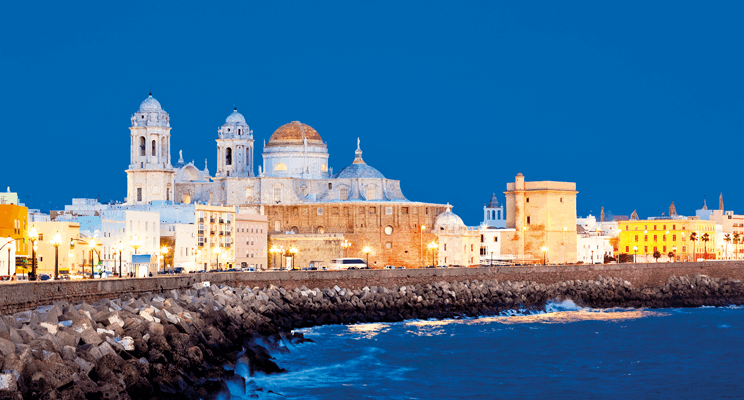 In the latest feature of our Five Minute Focus series, we take a closer look at Cadiz in the Andalusia region of Spain, and what it is offering British buyers looking to buy an overseas property.

Thousands of years ago the Greek philosopher Plato penned the legend of Atlantis, a paradise in an idyllic location on the Atlantic just beyond the pillars of Heracles (the Gibraltar Strait) where mild weather and a dreamlike environment provided a perfect civilization. That is exactly where Cádiz is: on the southwest coast of Spain, in the furthest south of Europe only a mile away from Africa. An ideal setting between two oceans and two continents, the only place in Europe that offers both Atlantic and Mediterranean beaches.

The historic threshold of Europe, Africa and South America, it was for centuries the port where the Spanish fleet would depart from and come back to when crossing the Atlantic, creating a cultural exchange that left an exotic flair traceable in the character of the people, the music and the architecture.

This paradise, both multicultural and full of character, has now been rediscovered by international tourists that arrive on low-cost flights to Gibraltar, Jerez, Seville (80 miles away) and Málaga (150 miles away) and sometimes leave in ferries to explore the North of Africa.

The Spanish have always considered the wild Atlantic beaches of Cádiz to be the best in Spain. The turquoise Caribbean like waters and white soft sands characteristic of the Atlantic coast are flooded with the largest amount of sunlight in the country, hence “Costa de la Luz” or “Sunlight Coast”. Numerous beaches like La Barrosa or Bolonia have been awarded best beach of the year.

Those who have visited the beaches of the Caribbean and Cádiz usually prefer these. Indeed, watching how the sun sets in the ocean, sitting on top of the biggest dune in Europe or watching the lighthouse of Trafalgar peacefully announce the end of the day in historic waters prove these awards right.

But for those who prefer the Mediterranean beaches there are also places to choose from, like Sotogrande one of the most exclusive marinas in the Med, and within a two-hour drive even Puerto Banus can be visited for a day trip. The mountain landscape is also breathtaking and fields full of bulls (the famous bull billboard was originally designed there due to the numerous breeding farms), the beautiful pine forests of Doñana (the biggest Natural Park in Spain) and spectacular mountain ranges such as “Sierra de Grazalema” (paradoxically the wettest region in the country) are also to be found. There is a landscape for everybody, be it a daunting forest or an endless beach.

Putting with Gibraltar as a background? Cantering on the beach at dusk? Crossing to Africa and windsurfing? Too good to be true, but it is. Golf resorts are to be found from east to west in the province, including “Novo Sancti Petri” in Chiclana designed by champion Seve Ballesteros. International kite- and windsurfing competitions take place every year in  the beaches of Tarifa. Yacht sailboats  race between two continents and two oceans in regattas like the Straight Challenge. Juan Sebastian Elcano, the Spanish Army’s flagship, hoists its white sails and races with similar vessels at the Tall Ships’ Races.

Every March horses spring in the Sunshine Tour held in Montenmedio; every May the best PRE stallions can be seen parading in the streets of Jerez; every June the biggest horse gathering in Europe takes place in the nearby town of El Rocío and every August horses gallop swiftly racing in the long beaches of Sanlucar de Barrameda. It is also in the province of Cadiz where the breeding of bulls originated and where the most charming typical Andalusian white old towns are to be found.

If music is your passion, welcome to the home of flamenco and enjoy it in spontaneous outbursts of joy during festivities. Cycling, hiking, kayaking, going for a walk on the beach… there is an adventure for everybody.

British TV chef Rick Stein revealed not long ago his fondness for the tastes of Cádiz. Fish and chip fans will love the “pescaíto frito”, the battered fresh fish that is the most typical tapa of the area. Local oysters and all sorts of fish can be found everywhere. Specially not to be missed  is the best tuna in the world still fished following a traditional Roman system.

The best sushi restaurants from Japan get their tuna supplies here. Meat lovers will enjoy a steak of “vaca retinta”, a local breed of beef that grazes on wild beaches, considered to be one of the most tender meats in Spain.  And what better to pair these delicious bites than with a glass  of Shakespeare’s beloved sherry “sack” poured directly from the centenary  barrels of a bodega? A unique and world renowned wine produced only in this region that has been produced for more than three thousand years.

Where to buy a property in Cadiz

At the higher end of the market you can find a historic cortijo with land to breed horses or bulls, a villa with vineyards and  a traditional bodega, or a luxury frontline property with its own mooring. For  those looking for mid-range properties a countryside villa starts at around €150,000 and will vary depending on usual criteria such as location, size, specification.

Apartments in the historic old town of Cádiz or near the coastline are normally sought after and start at €120,000. For investors, both these apartments and the villas have a good rental potential. For bargain hunters a rustic property in a semi -rural location or an apartment in smaller towns start at €50,000. There is a property for everyone.

search for a property in cadiz