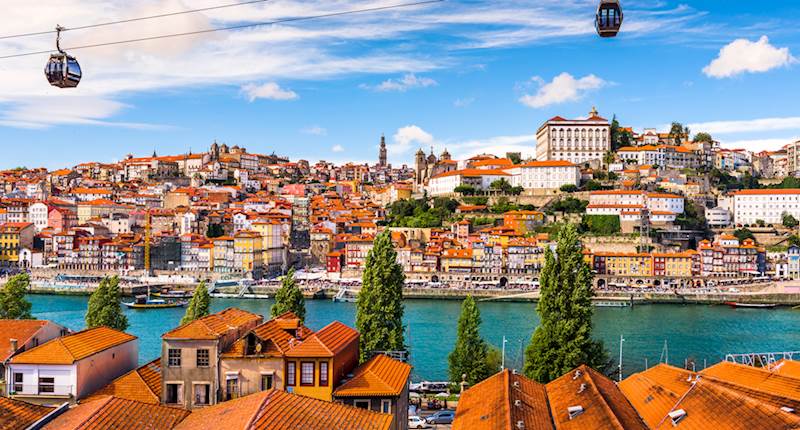 If the Algarve is a little sleepy for you and yet you love the culture of Portugal you might want to consider the country’s second city of Porto. This charming location, which is a Unesco world heritage site, is the gateway to the beautiful Douro Valley which is a wine tourism destination in its own right.

While once visitors queued for the scenic cruises along the Douro river and the city’s 300-year-old port houses owned by British families including Taylor, Warre, Graham, Cockburn, Symington and Dow, on the south bank of the river, the centre is now being rediscovered by both tourists and property investors.

The granite city – with six bridges spanning the Douro river including the Maria Pia bridge, by Gustave Eiffel –is easy to navigate, full of cobbled streets, with a buzzing riverside of pavement cafés.

The fact is that Baixa, the historical centre of Porto, has been rather abandoned by many of the locals. For years and some of its streets have the feel of a ghost town. Street upon street of once-elegant townhouses, their façades of colourful ceramic tiles broken and dirty, have lain empty since the 1950s. Since then the population of the heart of the city has dropped from 500,000 to 50,000 – a fraction of Porto’s total of 230,000.

Locals who could afford to moved to the upmarket suburb of Foz (where the international schools are and villas cost €1 million-plus) which is closer to the Atlantic coast; or to apartment blocks in the nearby fishing village of Matosinhos, close to the main beach of Porto and its good surf schools.

But the regeneration of Baixa has now begun, and whole blocks of scaffold-clad medieval townhouses are being bought up by local and foreign developers. They are acquiring four-storey townhouses for about €500,000 to €600,000 each, renovating them into four large apartments, or up to eight studio units, and either selling them to private buyers, or renting them out on Airbnb.

As more and more tourists arrive – Monarch Airlines have started new routes from Luton and Manchester from April (three times a week each) – there’s a shortage of attractive apartments to stay in the city that has become a mini-break destination. The Portuguese national airline TAP fly regularly, as do British Airways and Ryanair.

Stylish new restaurants, artisan coffee shops and gin bars are also popping up in Baixa, and even some of the Foz locals are rediscovering this part of their city.

So why the change? The improvement of the city, which was a European capital of culture in 2001, began when Portugal hosted the 2004 Uefa European Championship football tournament. The following year its international airport was upgraded into the stylish, modern terminal that it is today. Tourism figures have jumped considerably since 2013 and now there is a shortage of hotel beds as well as rental apartments.

From a property investment perspective, the revision five years ago of tenancy laws – that controlled rents and meant landlords could not afford repairs – was a major turning point. In Lisbon it catalysed the transformation of its historic Chiado district, where prices have gone up by more than 30 per cent in three years and are now €10,000 per sq metre. “Porto’s Baixa is rather like Lisbon’s Chiado ten years ago – it’s all waiting to happen,” says Charles Roberts, managing partner of the agent Fine & Country Portugal which opened an office in Porto last summer to deal with demand. “There is great potential for foreign investment. The rental rates you can get in Porto are 10 per cent less than in Lisbon, yet property purchase prices are 30 to 40 per cent lower, so the yields are higher.”

So what can you buy? A Baixa townhouse to do up costs about €1,000 per sq metre – plus the same again in renovation costs – while a renovated one is €3,000 per sq metre. If you renovate one of these as mentioned above, you can charge €70 per night on Airbnb, or sell them turnkey for €150,000 to €200,000 each. In the pictures above you can see the quality of some of the ones recently renovated and ideal for tourism rentals.

Fine & Country has two-bed renovated apartments for €210,000, or at €240,000 (a two-bed 64m2 duplex) – see above, right. You can get a studio apartment for about €80,000. Local agent www.predibisa.com is a well-known Porto agent if you can navigate a Portuguese website. These prices are lower than you might find in Lisbon and cities such as Palma, Barcelona or Madrid. You won’t find as much choice in terms of renovated apartments, but the key is to buy now before demand drives prices higher. Properties on the less popular side of the river, Cais de Gaia, enjoy the best views (of the Baixa’s ancient roofline) but most of the riverside land is taken up by the long port warehouses, not residential properties.

So who is buying there? Investors from South Africa, Brazil and Switzerland have been buying buildings, according to Helena Bello, manager of Fine & Country’s Porto office. “Many individual buyers are French – driven by terrorism or social change at home – with a budget of €200,000 to €250,000.” She says that French buyers feel safer in this city than the capital Lisbon, and that it’s less frenetic and more compact. With Turkish safe-haven buyers the biggest overseas contingent in Lisbon now – and Turkish Airlines announcing that they are starting a new route to Porto – these might be the next to arrive.

In Lisbon they are taking advantage of Portugal’s Golden Visa scheme (offering residence permits to non-EU citizens with purchases of €500,000 or more) but the Golden Visa buyers haven’t really discovered Porto – yet. Rolling Stone Ronnie Wood and the actor Harrison Ford certainly have – they both visited the city last summer – and the best-selling author JK Rowling found inspiration for the Harry Potter novels at the city’s neo-Gothic Lello bookshop while she was living nearby.

The British have long been the biggest population of expats since they arrived for the port trade more than three centuries ago, and their influence is felt across the city.

Some of the most attractive streets in Baixa command a premium – a (relatively) hefty €4,500 per sq metre – such as Rua das Flores, Rua Mouzinho da Silveira and Avenida dos Aliados (Porto’s Champs-Élysées), but turn into streets next to these and prices halve. The downside of buying in to a district transforming itself before your eyes is that you will be living in a building site. But as a long-term investment, look what’s been happening in Barcelona’s or Lisbon’s old districts to see what is possible.