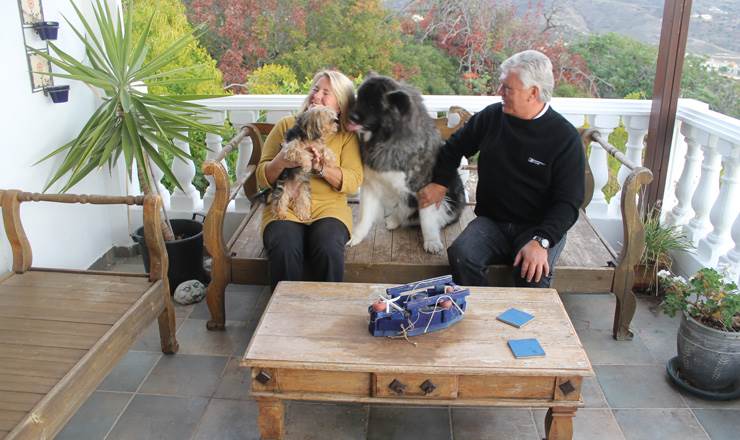 Fourteen years ago, Lynn and Tony Bell left behind their lovingly restored cottage in Yorkshire and moved to Peyia in the Paphos area of Cyprus. In that time the island – like most other locations since the millennium – has been through some peaks and troughs, but the couple are still very much in love with their adopted country.

So how did they carve out a new life – and a couple of businesses – and what is life in Cyprus like now? Lynn tells me as she sits on her terrace high on the Peyia hillside from which she can see the whole coastline, from Paphos to St Georges.

“Tony and I moved to our ‘place in the sun’ even though life was great back at home,” says Lynn, 56. “Tony was running a mobile communications business and my career in commercial radio was going from strength to strength I’d opened up new radio stations in the north-west and loved what I did.

“But for me, the move was enforced – I had suffered a horrible spine injury ten years before and was beginning to suffer the arthritic consequences – that would be helped by the climate of Cyprus, where we’d holidayed here for over 15 years. We’d already bought a piece of land and we’d built a home, furnished it and visited it whenever we could.

“But the fact is that the reality of moving to the sunshine, requires a huge determination to reshape a life, build a livelihood and grow ‘new beginnings’ into solid foundations.

“Everything from food shopping to healthcare, is different – or doesn’t exist. The UK is so very well structured and, being in our early 40s when we moved, we were very used to routine, understanding what to do if and when and how to change things that may need to be changed. In a foreign country, the sunshine doesn’t ‘give’ the magic solution; it’s only a very pleasant and welcome ‘side effect’ of the change you make in making the move!”

“Friends and family who have visited us over the years, sing the song of wishing they could ‘do this’ too – but are taken aback at the reality of ‘stuff’: from the ironing mountain; needing to paint the house and the big thing, needing to work! As they laze by the pool, we rush around doing our thing, which includes running the businesses we set up here, (a holiday company, cyprusvillas.uk.com and a pool water specialist company, thepoolpeople.eu).”

The couple, having realised there was no work available, realised they needed to create it for themselves and now employ 12 staff and work six days a week, plus many evenings too. They manage, let and maintain properties for other British expats, as well as a few Americans and Cypriots, whilst Tony, 58, is also an inspector for NSPF (the National Swimming Pool Federation), a role which involves teaching others to clean their pools to EU standards and travelling a lot.

When the couple arrived in Peyia full time they spent 18 months renovating their small home into a much larger one. The three-bed property - with the stunning views mentioned above – was extended to make a five-bed home with two lounges – a large, comfortable home that would be cost around €750,000 to buy today.

“The biggest mistake people make when they move abroad is not making a home here,” says Lynn. “They keep a base back home – trying to keep a foot in both camps – and with a small apartment here, they begin to miss their old family home and garden back in the UK. My view is that you can’t compromise, you need to invest everything in establishing your new home, and that also means integrating with the local community,” she says.

"You have to connect to a country and be flexible enough to appreciate that you are not in the UK, and thus things are not done the same way (or at the same speed),” she says – a seemingly obvious piece of advice yet something that many people fail to do.

“I was completely unprepared for the mammoth change which we were making and taken aback by how ‘English’ I am,” she adds. “I found it so very hard not to wear a jacket to meetings (you couldn’t – it’s too hot!), how slow everything was - the ‘tomorrow will do’ attitude to everything.”

“Of course a few years ago we had to face the situation when the country’s finances collapsed and a bailout from the EU had to be organised and people couldn’t withdraw money from the banks. At that time of the older, retired people did return to the UK but some stayed and realised that they could get through the crisis,” she says.

“Here you stand or fall on your own two feet – there is no free healthcare or a benefits system, you have to work hard. We have always run our businesses to the letter of the law, and paid our social taxes, but not everyone does – there’s been a lot of black money [undeclared income] and as such we feel we have less to worry about as far as any effects from the Brexit negotiations. When we arrived in Cyprus the country was not part of the EU anyway.

“I honestly believe everyone should make such a change once in their life: it’s an experience which requires of a person, to be bold, have faith, trust your capabilities and to really get to know yourself – but it’s not for the faint hearted or to be undertaken without research, planning and the help of experts. Read as much as you can about where you are going, experience living there temporarily but commit to making it work, changing whatever you have to in the process,” advises Lynn.

On the rare occasions the couple do take time off work they go out on their speedboat that they keep in Latchi and they are currently taking written and practical exams so they can skipper the boat. “We live happily in the sunshine and warmth of the island that is now our home. Our ‘place in the sun’ is hard won but worth it!”.