Where & How to Buy in Marbella | Part One 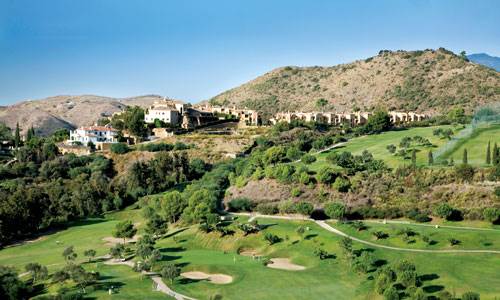 In the introductory part of a new mini series on our favourite Costa, Marbella based writer Joanna Styles takes a close look at popular areas on the stretch from Sotogrande to San Pedro.

This mixture plus over 320 days of sunshine a year - and that's guaranteed - have massive appeal. If you then add great transport connections (including Spain's fourth busiest airport with direct flights to dozens of destinations) and plenty to do all year-round it's easy to see why over 10 million tourists flock to the Costa del Sol every year. More than ever in fact - 10.19 million visitors in 2014, over a third of them British.

And along with those who pop over for a holiday are the thousands of us who have chosen to make the Costa del Sol our permanent base. Unsurprisingly, the winning combination of sunshine, modern infrastructure and great leisure opportunities has made this part of Spain a top choice for buyers, both for holiday properties and long-term homes.

After seven quiet years on the property market, the Costa del Sol is now back on everyone's shopping lists. Sales soared by almost 24 per cent in Q3 last year - according to the Ministry of Development - and after dropping nearly 35 per cent since their 2007 peak, prices appear to have bottomed out. The price per square metre for holiday homes in Malaga in Q4 last year was down just 0.11 per cent on the previous quarter with some areas - Marbella, for example - seeing slight price rises.

But making a choice about where to buy on this popular Spanish coastline can be challenge. To help you find the best spot for your dream home, this three-part series puts the Costa del Sol under the microscope.

First up is the West End - starting at Sotogrande, we make our way towards Marbella with an up close and personal look at the places and property on the way.

Mountain ranges back the western end of the coast just as they do all the way along the coastline, but they're greener at this end and there are more trees. Higher rainfall is the key to this more verdant landscape and you'll also find it's windier - don't forget, the European kite-surf capital of Tarifa is just down the road.

It's also a lot quieter. The resorts are smaller, low-rise and generally less touched by the ravages of tourism seen further east. The beaches are still clean but less manicured and some so quiet you can find a spot to yourself even in high summer. This is a place where you'll be hard pressed to find a flamenco doll souvenir and Spanish is mostly what you'll hear on the streets.

"The west coast is far more spread out with a lower build density," says Mia Pearlman of Chestertons Affinity. "In the west you'll find a build capacity of 20 to 30 per cent compared with 30 to 50 further east."

This idea of less construction is echoed by Conchi Ruiz from ABF Estates (remaxtop.es) who says that most of her clients in this area are attracted to the quieter and less built-up feeling to this part of the coast. But she points out that this tranquillity comes with the down side of being that bit further from Malaga Airport, a disadvantage for those who do a lot of international travelling.

"Better value for money when it comes to property is a big plus for the western end of the coast," says Samuel Markmann of Crystal Shore Properties (crystalshoreproperties.com). "Prices here are much more affordable than Marbella yet it's only a short drive from the more expensive areas".

Official statistics back up this view. In the last quarter of 2014, prices on the western side of the Costa del Sol averaged €2,188 a square metre, but this median hides huge contrasts. At the lower end was Manilva whose property price tags read €1,759 while those in Marbella are almost double at €3,128 (figures from the Observatory of the Urban Environment).

General consensus among agents is that now is the time to buy. Ms Pearlman says that although bank repossessions on the market can give the impression that there's still a way to go before the market bottoms out, the reality is different. "Our vendors are upping their asking prices and very rarely taking a drop in price," she says.

Buyers too think that now is the time to buy. "Nine out of 10 clients tell me they've been waiting for a couple of years and now feel prices are at their very lowest," says Ms Pearlman. "If you've been playing with the idea of buying a property on the Costa del Sol then the time is ripe to take action," adds Mr Markmann.

So, if you're looking for a quieter, less built-up side on the Costa del Sol where your euros stretch that bit further, the West End seems a good option. Along with Nerja, Estepona is probably the Costa del Sol resort that has best kept its authentic Spanish identity. The town itself has a pretty old quarter with traditional shops and tapas bars, a long seafront promenade with a family-friendly marina at the western end and over 20 (and counting) giant murals dotted throughout the town. Look out for Europe's largest orchidarium opening later this year. Long grey-sand beaches line this part of the coast where you can still find a quiet spot to lay out your towel in August, but Estepona also has its share of luxury.

On the so-called New Golden Mile, five-star hotels and funky beach bars rub shoulders with some of the Costa del Sol's most luxurious beachfront properties.

Alongside are some of the Costa's oldest developments such as El Paraiso with villas and townhouses, and the Cancelada area, popular with relocating families. Inland is the super-luxe Villa Padierna hotel, Los Flamingos golf course and the hugely successful Selwo safari park.

"There's a lot of growth potential still in and around Estepona," says Marc Prichard of Taylor Wimpey Espana, who is launching a new development there, Jade Beach. Estepona's one of the Costa del Sol's holiday let hotspots with many properties seeing record occupation in 2014. "The last two years have been great for rentals in Estepona," says Ms Ruiz. Ms Pearlman agrees - "It always does well because it's cheaper, appeals to families and there aren't that many hotels," she says.

Families and golfers in search of the Spanish side to the Costa del Sol and/or a buy-to-let holiday home. Administratively part of Marbella, the sleepy town of San Pedro is a far cry from its celebrity sister, but it's where A Place in the Sun's presenter, Laura Hamilton, chose to buy a family holiday home two years ago. In the Spanish bars and restaurants life moves quietly by and this is indeed a very much a family-centred town.

Hugely improved by the tunnel-bypass, San Pedro has a mixture of traditional Spanish builds and newer developments that meander down to the seafront via the huge boulevard park. A new bus station is on the cards this year and services will include a direct bus to the airport.

Prices are on the up as demand increases and the few new developments have been snapped up quickly, within just six weeks in one case. Ms Pearlman thinks the new bus station will also hike up prices. Like Estepona, San Pedro's a sure bet for holiday lets - "walking distance to restaurants, the beach and amenities make it a perfect spot for a holiday," adds Mr Markmann.

Taylor Wimpey Espana are just launching their new development on a frontline spot between San Pedro and Puerto Banus, Jade Beach. So popular is this location, they report that there is already a waiting list of several hundred buyers. Apartments start from €400,000 (£296,242), and are due for completion in July 2016.

Families looking for a Spanish atmosphere in easy reach of Marbella. Perched above the coast, Manilva is a sleepy town whose economy once revolved around grape growing and vineyards still cling to some of the hillsides. But down on the coast, the big supply of plots caught developers' eyes and Manilva now has some of the area's largest developments.

Be very selective about location in the Manilva region. Among the biggest - and better quality - are Duquesa Village and Residencial Duquesa, both with over 500 apartments. Frontline golf property with sea views is available on the two golf courses.

Slightly further east along to the coast sit the higher-end Marina de Casares and Casares del Mar developments. There's a good choice of shops and services in Sabinillas and the Duquesa Marina with its selection of bars and restaurants has a traditional Spanish fishing port feel to it.

Bank repossessions in Manilva's sprawling developments have been commonplace and the excess supply has brought prices down. That said, sales here were brisk in 2014. "You can still pick up a two-bed, two-bath property in Manilva within walking distance of the beach and marina for €120,000 (£90k) fairly easily," says Ms Pearlman. For something bigger, expect to pay from €180,000 (£134k) for three-bedroom townhouses.

Young families looking to get a foot on the Spanish property ladder. Designed and built as a millionaire's retreat, Sotogrande is home to one of Spain's top polo clubs, five golf courses (including the Ryder Cup host Valderrama), a smart marina and some 2,500 luxury mansions. Almost deserted out of season, Sotogrande comes into its own in July and August when diplomats, millionaires, models and the odd Royal get together for a round of golf or a charity fund-raiser.

Surprisingly more than you'd think considering this is one of southern Europe's most exclusive developments. You can pick up a two-bed marina apartment for just under €200,000 (£149k) and villas start at €600,000 (£448k).

Golf and yachting lovers in search of a (very) quiet life.

One to watch for value: La Alcaidesa

If you like this área but can't aff ord Sotogrande, have a look at nearby La Alcaidesa. It's one example of an area that is seeing a significant upsurge in interest, especially from British buyers, partly because of its proximity to Gibraltar, which is easy to fly to from the UK and the airport is only a few minutes' drive across the Spanish border.

The other key factor is price. "Currently you can fi nd amazing properties in Alcaidesa with discounts of up to 60 or 70 per cent. Brand new two-bedroom/ two-bathroom homes close to the golf course are selling for around €103,300 (£76k) which, given their quality build, are not surprisingly generating a great deal of interest in this área," says Marcos Loriente, VIVA Sales Manager. yourviva.com