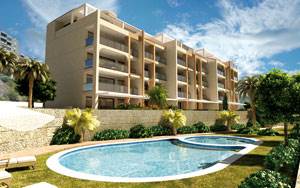 Attracting a record total of 8.3 million tourists in August helped Spain's economy to register growth for the first time in more than two years over the summer of 2013, the knock-on effect being a return of confidence in its property market.

At the start of 2013, there was still concern among British and other foreign buyers about buying into a falling property market, not helped by a strong euro, but it seems the second half of that year was a turning point as bargain-hunters have returned to popular parts of the Costas.

"Sales have been the strongest for us since 2006 in all three regions we operate in, namely Mallorca, the Costa del Sol and Costa Blanca," confirmed Marc Pritchard, the sales and marketing director at the developer Taylor Wimpey España.

"Sales from British clients are up 29 per cent [year on year] and it is still a buyer's market, because prices in the better locations are not dropping any more."

On the Costa Blanca, local agent HomeEspaña reports demand in 2013 being back to levels seen before the property crash, noting a wider diversity of nationalities buying there today, including Scandinavians.

Spain's property market remains highly regional, though, and while prices in sought-after areas with controlled stock may have stabilised, other areas with an oversupply and high concentration of bank repossessions are expected to fall further in 2014, as banks are forced to offload unwanted stock. It's key, therefore, always to think long-term.

"You have to shop around a bit, because the Spanish property market is never transparent, and there are still plenty of vendors with unrealistic expectations," says Mark Stücklin of SpanishPropertyInsight.com.

"But if you make an effort, you can find some great deals."

Stücklin adds that Spain's new Golden Visa, which went live in October 2013 and grants residency to non-EU buyers who invest in property worth €500,000 (£417,600) or more, will have a positive impact at the top end of the market, especially in cities like Barcelona, Valencia and Seville.

Meanwhile, other new regulations introduced in 2013 are less attractive: "The new obligations for expats to declare assets worldwide, plus property transaction costs that have gone up in some popular areas to close to 15 per cent, will discourage foreign investors," states Stücklin.

Owners who intend to let their new Spanish home could also be subject to tighter new rules on rentals and should check with their local town hall.

Costa Blanca and Costa del Sol remain the key areas for expats and holiday homes on mainland Spain. However, bank repossessions available in Murcia are drawing bargain-hunters - typically offering attractive finance terms, you can get a two-bed apartment for €65,000 (£54,300).

In the southern Costa Blanca, resales in the popular resorts of La Zenia, Villamartín, Punta Prima and Cabo Roig have been the mainstay of the market. Prices for two-bed apartments on a complex near the beach start at around €70,000 (£58,500), townhouses at €90,000-€100,000.

In the northern Costa Blanca, the pretty beach resorts of Moraira, Calpe and Javea remain popular, but buyers after a more rustic lifestyle are increasingly discovering the Orba and Jalón valleys.

Kieran Byrne, the managing director of HomeEspaña, says: "These areas are not only picturesque, but you get more for your money, so typical three-bedroom villas with a private pool in the Jalón or Orba Valley are 10-20 per cent cheaper than equivalent properties in a coastal resort."

On the Costa del Sol, David Ashton of Utopia Spanish Property notes that the most popular areas are Marbella and its environs, including Elviria and Nueva Andalucia. Meanwhile, the Mijas Costa further east, along with Fuengirola and Benalmadena, are seeing a rise in popularity, thanks to lower prices.

Pritchard seconds this: "The Marbella area has performed extremely well for us in 2013. At our Los Arqueros Beach development, in San Pedro-Marbella, we have sold 114 properties to 16 different nationalities in only 11 months off-plan."

Looking at 2014, the consensus is a positive one. Spanish property is back on the radar of large institutional investors, which can only improve investor confidence and reduce the perceived risk of investing in Spain.

There are over 30 exhibitors selling property in Spain, so there's bound to be something to suit every taste and budget.

Tickets to A Place in the Sun Live are on sale now at two for £15. Click here to book.