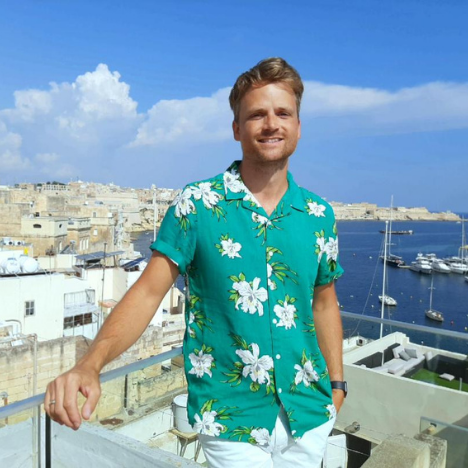 A Place in the Sun presenter Ben Hillman has appeared on the TV show since 2016. He joined the team with a wealth of property experience, including running his own interior design business.

Ben is a hands on kind of a guy, he’s as at home with a hammer as he is on a Mac. To much critical acclaim Ben has recently completed his own self build project in the heart of Brighton, facelifting a tired 1970's purpose built block of flats and adding a new penthouse apartment on the existing flat roof.

Ben studied Product and Furniture Design at Ravensbourne College where he had early success designing and launching F-LUX lighting, one of the worlds first portable LED lights and prototyping furniture designs with Conran partnership.

With an affinity for all things home, Ben completed an internship with michaelsodeau.com before working as Special Projects Manager and then Assistant Interiors Editor for Wallpaper Magazine.

Ben has also worked for The White Company co-ordinating photo-shoots and assisting in the styling of both their web and brochure photography. Shortly after this he launched a range of colour changing ambient greetings cards and pioneered the trend for laser cut stationery and was Highly Commended as Gift of The Year 2006.

In 2010 Ben went on to win ITV's nationwide search for 'The Next Big Thing' in interior design. Shortlisted by Laurence Llewelyn-Bowen and Michelle Ogundehin (Elle Decoration), Ben presented a series of Interior Design features on 'This Morning' where he taught the nation how to adapt and upcycle furniture to create unique and individual living spaces, and ultimately achieve a little bling without the sting.

Ben has filmed three series of 'The Renovation Game' for Channel 4 as well as 'You Deserve This House', '60 Minute Makeover' with Peter Andre and ‘Auction Party’ with Laurence Llewelyn-Bowen, and is now back at Channel 4 with A Place in the Sun. He is also an ambassador for Black and Decker and is the presenter for B&Q's Youtube channel (bandq).