Our Overseas Property Hunters - What Happened Next? Part 1 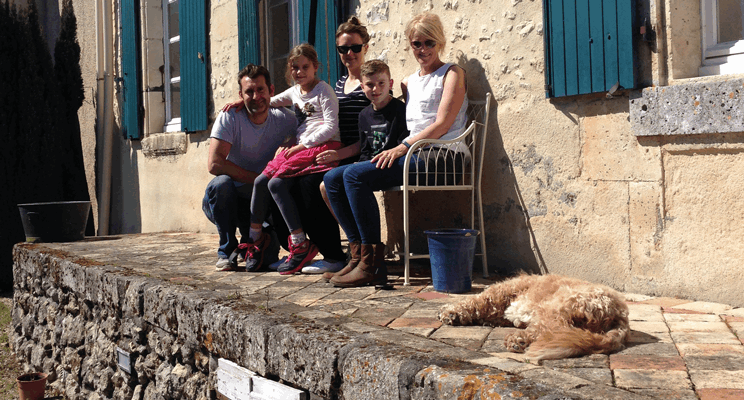 We are always getting emails asking what happened to some of the people we have helped to ﬁnd a home in our magazine or through our TV series. Here Richard Way revisits one of our successful buyers...

Mark and Judy Andrews from West Sussex got the keys to their 400-year-old farmhouse near Aubeterre sur Dronne, Charente, in December 2014, having agreed on a purchase price of €210,000 through the agency Leggett Immobilier. They’re loving family holidays there with their twins James and Isabelle, and Judy’s daughter Lauren, while rentals are also proving a success.

“Owning a second home in France has exceeded our expectations,” says Judy. “We had our second family Christmas there last year, which was fantastic. Whether it’s all or some of the family, last year we went out there half a dozen times, including every school holiday. I was there for four weeks with the twins, while Mark came out for about three weeks.

“We now spend alternate summers there, which allows us to holiday somewhere diﬀerent and generate some good rental income. Exploring the area is a highlight. We’ve done skiing excursions to the Pyrenees and this year we’re planning a trip to the slopes of the Massif Central.

“We’ve made a few improvements since buying and found a good English builder, Alex, to do the work. In the main house, which didn’t need much doing to it, we’ve redecorated the kitchen, added new furniture and had window boxes installed in the living room. In the adjoining one-bedroom cottage, which can be used as a separate gîte or alongside the main house, we’ve painted throughout and put in a new kitchen.

Outside, we’ve painted all the shutters – grey, not blue – put a heater in the pool and restored the bread oven, which Mark used for cooking pizzas over Christmas! At some point, we’ll convert the loft into two further bedrooms.

“We’ve been lucky with the neighbours. On one side are a lovely old French couple whose family have been in the village for generations. On the other side are a resident English couple, who until recently looked after our pool. In return we let them use it and took them out for meals.”

“For rentals, we advertise on Airbnb and we also have our own website, Chezgigon.com. For general management of the property and looking after our guests, we use a local French man called Charles, who has been great. He also organises wine and food tours. This year, we’re letting the house for the whole of the summer and already have eight or nine weeks booked.

“We had just one slight setback along the way, which happened way back when we were buying the property. Through a French broker, we were oﬀered a mortgage in principle by a French bank. But just a week or so before completion date, the bank decided to refuse us a mortgage, causing mild panic. We managed to put back completion date a month and ended up scraping together enough cash to buy outright, so it has worked out ﬁne. And that was before Brexit when we got around €1.25 to the pound.

“We’re don’t think Brexit will aﬀect us. We’re one of the thousands of British homeowners and think France and the UK will reach some kind of reciprocal agreement.”

Did you know? New figures reveal that France is the top choice for Brits relocating with children, according to the Office for National Statistics (ONS).