The Timeless Appeal of Tuscany 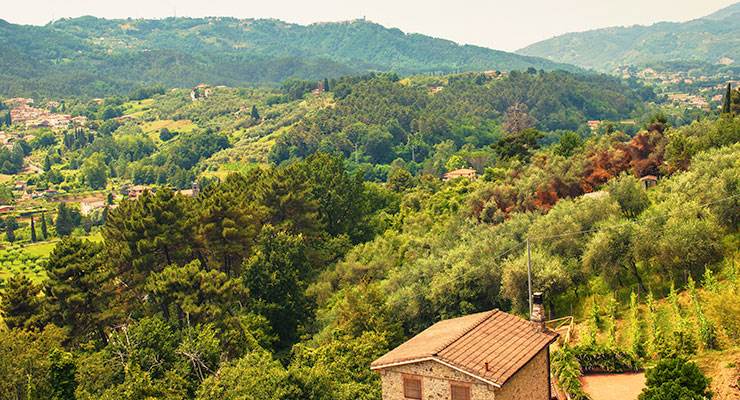 The central Italian region of Tuscany has a lifestyle reputation every bit as golden as its remarkable culture and history. Yes, there are the Renaissance highlights of Florence and Lucca and the gasp-inducing hill towns of Siena and San Gimignano but it is the gentle folds of green countryside and the thought of an informal lunch stop among the vines that make the living so easy.

That enduring lifestyle appeal has enticed British home buyers for several generations. Britons started buying there 50 years ago, well before we became a member of the European Union. With the turmoil of Brexit still fresh in everyone’s minds, it’s important not to lose sight of why 48 million tourists visited Italy last year and why it can claim to be Europe’s second most-visited tourist destination for overseas visitors, according to figures from Eurostat. Besides, for some buyers, the lifestyle appeal of Tuscany is charmingly enduring, whatever the value of the pound, and it is irrelevant whether the UK is part of the EU or not.

Such appeal is practical and aesthetic. Tuscany has good rail and road connections and is served by several airports with direct flights to the UK: Florence and Pisa in Tuscany itself and Rome and Genoa to the south and northwest respectively. The combination of this easy access, calm beauty and a good helping of the world’s art treasures – about 40 per cent, according to Unesco – also make it our preferred Italian region for a second home. The latest figures from Gate-away.com, the Italian property portal, show that more than 14 per cent of UK inquiries for homes in Italy last year was for Tuscany, handsomely beating Abruzzo (12 per cent), Puglia (11 per cent) and Liguria (10 per cent).

“Tuscany remains the most sought-after region for Britons in search of a second home in Italy,” says Simone Rossi of Gate-away.com. “While across Italy the average value of properties they request is €300,000, in Tuscany it is €330,000.”

For buyers prepared to shop around away from the headline locations, there is value to be found as Gate-away.com figures show. While a home in Tuscany’s prime Chianti area averages €380,000, the average for a home in the less illustrious northern Lunigiana region is €110,000. This price reflects the fact that many properties in Lunigiana need some restoration but shows the value on offer. A typical British budget is €60,000 to €200,000, says Geoff Dixon of House in Tuscany (houseintuscany.com); and while Tuscany has some pricey luxury villas there are still interesting options for these buyers.

“There are big differences in Tuscany: all areas are not the same,” says Dixon. “For example, the countryside around Lucca is more exclusive and expensive than the land around Pescia or in the Garfagnana hills and homes in the seaside resorts of Forte dei Marmi or Viareggio are two or three times the cost of a home in Tirrenia close to Pisa.”

As a guide, Linda Travella of Casa Travella (casatravella.com) says that Tuscan home searches fall into four price brackets. Buyers with budgets under €100,000 tend to look around Bagni di Lucca. Those looking to pay under €200,000 focus on the northeastern region and towns including Poppi. If they have up to €350,000 they look further west around Volterra, and those with a budget above €400,000 can consider prime Tuscany.

Northern Tuscany represents “the first and best value” in Tuscany, according to Travella. Access is excellent from Pisa airport and local attractions include beaches, mountains and authentic villages and towns. The centrepiece is the beautiful Lucca with its 16th-century ramparts and white marble Romanesque Duomo.

“Look around Bagni di Lucca, Barga and some parts of Lunigiana,” Travella recommends. “For some, the countryside in this region is not ‘typical Tuscany’, but clients can find great value for money with properties from around €50,000.”

The Garfagnana valley north of Lucca is a good example. Its rugged hillsides, marble quarries and forests with views towards the snow-capped Apuan Alps is indeed very different to the gentle valleys of southern Tuscany but it has its own less chiselled beauty and plenty to do. There is skiing 70 minutes away in Abetone and the elegance of Portofino to the west along with the usual fabulous Tuscan food: wild boar, truffles and hearty pasta.

For 85 per cent of Rossi’s buyers, the dream is a detached house with land. House in Tuscany, meanwhile, has two typically Tuscany stone houses, both in medieval villages in Lunigiana and both for €190,000. One is close to the medieval town of Fivizzano, known as the Florence of Lunigiana, with outside dining area; and one is in Comano (pictured left).

North of Pisa and close to the sea, Casa Travella is selling a four-bedroom, two-bathroom house with a garden just outside the village of Fosciandora for €190,000 (£159,100), Comano €65,000. Further south a detached rustic fully renovated four-bedroom house with barn set in 20 acres at Molazzana, 55 minutes from Lucca and 90 minutes from Florence, is €245,000.

Rupert Fawcett of Knight Frank (knightfrank.com) agrees that the Garfagnana valley offers interesting value and highlights a three-bedroom apartment in a restored olive mill close to Lucca and within 10 miles of the coast for €290,000. Fawcett also suggests looking east of Chianti towards Arezzo.

Central Tuscany: Where to find value?

Central Tuscany, with its rolling landscapes of olive groves, vineyards and cypress trees, is one of the most expensive areas to buy. Your money will not stretch too far in the so-called Golden Triangle that sits north of Siena and south of Florence. One solution for good value is to focus a property search around Volterra, says Travella. Twenty kilometres north of Volterra and within one hour of Pisa airport in Lajatico, a pair of two-bedroom terraced houses, the final two of eleven in a restored medieval hamlet, both with private garden, are €250,000 and €270,000 through Casa Travella (pictured below).

Close to San Gimignano, an artfully decorated portion of a beautiful country house with two bedrooms and a pool shared with one other property is €450,000, also through Casa Travella. To the east in the market town of Loro Ciuff enna, Knight Frank is selling a three-bedroom apartment over two floors in a palazzo dating to 1600. The €420,000 price tag includes a garden with a border along the town walls.

The 250-mile long Tuscan coast is hugely popular with Italians but often overlooked by British buyers who concentrate more on the region’s rural charms. The upmarket resorts of Forte dei Marmi and Viareggio top the price list followed by Monte Argentario, a green and densely wooded peninsula in the southern Maremma region, with the town of Porto Santo Stefano once dubbed the Italian Saint-Tropez. Prices are about 20 per cent lower there but elegant water-front villas still change hands for several million euros.

A four-bedroom fully renovated detached house with a garden including 70 olive trees, seven miles from Viareggio and 30 miles from Florence is €495,000 with Knight Frank (pictured above); and a two-bedroom apartment in Viareggio, ideal for rental income, is €250,000 through Casa Travella.

Further south in the Maremma, Talamone is a small fishing village with sandy beaches, pine forests and a harbour overlooked by a 13th-century fortress. House in Tuscany has a two-bedroom apartment directly on the beach there with wonderful views across the Bay of Argentario to the islands of Elba and Giglio for €625,000.

Along the coast – and also in cities – buyers often choose apartments, says Rossi of Gate-away.com, possibly because property prices in both locations are generally above regional averages. A two-bedroom apartment in Castiglione Della Pescaia - close to the classy resort of Punta Ala on the Tuscan coast in Grosseto - is for sale for €420,000 through Gate-away.com. Or House in Tuscany has a two-bedroom apartment over two floors of a house in San Vincenzo, one mile from the sea between Grossetto and Livorno.