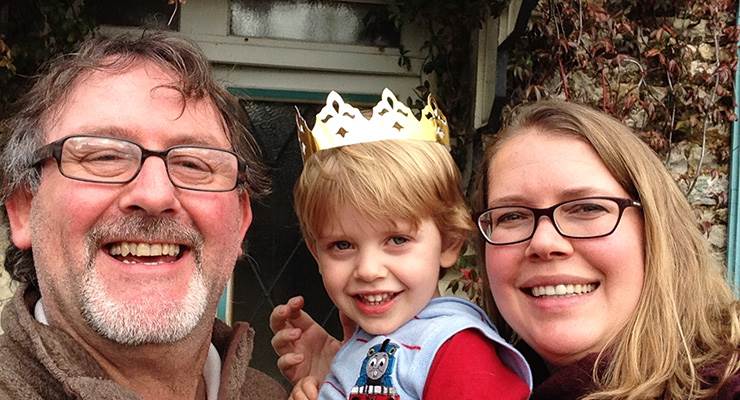 Keith and Laura Springham, along with their, then two and a half year old, son Patrick, moved to the Charente region of France in 2015. Since then they have a new addition to the family in the shape of their daughter Béatrice, born in November 2016.

Here Laura tells us about their journey, from living in Bermuda to house hunting in France and what happened along the way.

Can you start by telling us a bit about yourselves?

We’re a family with roots on both sides of the Atlantic, Keith is originally from Essex but I’m from Washington State in the US. Our son Patrick was born in the British territory of Bermuda which is much closer to the USA than the UK, so I suppose it’s kind of a compromise.

Keith had a career as a professional baker before running a small B&B and offering baking lessons. And I’m a professional violinist/violist, performing at weddings, concerts, special events as well as giving music lessons.

What was it that drew you to France? And did you have an area in mind?

We had been living in Bermuda for 9 years but knew that we would eventually have to leave because we only had work permits. So we started to look around for somewhere that was affordable for us without a mortgage – we were hoping to buy the property outright.

We also wanted our children to be bilingual which, coupled with our love of France and French culture, left us with an obvious choice!

There wasn’t a specific region or town in mind when we started looking back in the summer of 2015. Instead we began in Brittany and worked our way down the Western side of the country, stopping in several places to explore the local property market.

In the end we looked near Pau, Toulouse, Perpignan and Charente, but we could not find anything we really wanted that was within our price range. The only place that had a property which was ready for us to move straight into was here in Charente.

That seems like quite an extensive search! Were you looking for a very specific type of home?

Not that specific! We wanted a house that had B&B or gȋte potential as that would provide us with a bit of extra income. But also somewhere with a large amount of outdoor space and ideally a barn or other outbuilding that could be converted into a baking area and/or music studio.

So, did you manage to find a home that ticked all the boxes?

We didn’t know it at the time, but one of the properties we looked at early on ended up being our new home. Although we liked it at the time, we decided to continue looking to see if anything else came up – 25 houses down the line and nothing had come close.

So, a few months later we called the agent to see if it was still for sale. Fortunately, she not only said that it was still on the market but also that its owner had just dropped the price. That was all the encouragement we needed!

It is a three bedroom detached house in rural Charente, with two barns, an enclosed garden, workshop and a wine cellar. All for just €120,000!

After the second viewing, we knew it was the right place for us and submitted an offer. This was accepted and in January 2016 we officially moved into our new French home.

A lot of people can be put off by the complexity of buying overseas, how did you it?

Well, we have never owned a home before (either one of us) so this question is a quite hard for us to answer.

Personally, we chose to go with an agent even though there are more fees, because we wanted to have the help and make sure everything was done correctly, especially with the language barrier. There didn’t seem to be any point in trying to save a relatively small amount of money by going alone and risking potential legal issues a few years from now.

Did any of your expectations change during the buying process?

We definitely had costs that were more than we had budgeted for. As an example, we knew that the septic tank had to be replaced in order to add bathrooms to the B&B renovation, but the original quote we received from the estate agent of €6,000 euros ended up being far too low. It turned out to be about double that price because of the complexity of redoing the system.

However, the living costs are very reasonable, especially food (which is a real bonus because French produce is generally fantastic). We had been used to the living cost in Bermuda which is very high, similar to New York City, so we were happy to leave the high cost there.

Has your French dream become a reality then?

In the main yes. It can be both very rewarding, and some days very challenging, although the latter days are getting fewer. The administrative side of our businesses can be particularly daunting, but we’ve hired an accountant to make sure we have everything in order which is taking away a lot of the stress.

But as we are living here full time, we are enjoying the benefits of our son being enrolled in school, setting up both our businesses, enjoying our newborn baby, and making friends in the area. We’ve also been taking French lessons and slowly getting involved in our community which I think is really appreciated by the locals.

Overall, we are just enjoying a simple lifestyle full of good food, friends, and French!