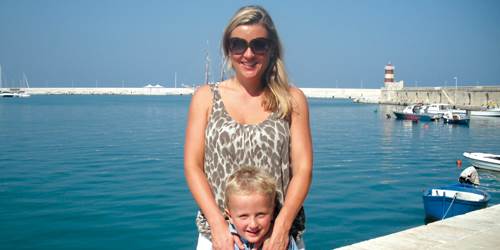 In 2009, Melissa Byrne and her husband Blaise Hammond from Kingston-upon-Thames in Surrey found their dream home in Puglia, the sun-soaked 'heel' of Italy.

When first thought about buying an Italian holiday home they began their search in the north of Tuscany.

"We were originally looking in Lucca close to Pisa but then decided that we wanted to be by the sea so switched to Puglia," says Melissa, 40. "The region has something of a Greek vibe. It's a bit more wild and rugged with great food and wine and has a character that I have not found elsewhere in Italy.

Puglia is awash with ancient olive groves, vineyards, sandy beaches and wonderful Baroque, Byzantine and Romanesque architecture. It has coasts on both the Adriatic and Ionian Seas and the couple's children Gabriel and Luca, nine and six, love the space and freedom there. They have no TV - life is lived mostly outdoors.

The Byrnes paid €140,000 (£110k) for a modern three-bedroom detached house five miles from the Adriatic Sea and five minutes by car from Ostuni. This is one of Puglia's most attractive towns, known as the 'White City' for its closely packed dazzling whitewashed buildings that wind up the steep hillside.

Ostuni is well placed to see many of Puglia's most alluring locations including the UNESCO World Heritage Site of Alberobello with its collection of truilli houses, circular stone homes topped with a conical roof.

Local towns are stuffed with small family-run osterias serving the food for which Puglia is famed: most notably ear-shaped orecchiette pasta, robust olive oils, pecorino and ricotta cheeses and the freshest, plumpest fruit and vegetables found in this food-obsessed country.

"Although it is in the south of Italy, Ostuni and the towns around it never feel like the poor relation," says Melissa who works in PR. "We always visit Monopoli for shopping and the restaurants near the main square and also head to the beach shacks at Torre Carne right on the sea for the freshest seafood.

"Then there is Ostuni's Saturday market, the largest in the area; Ceglie Messapica and Cisternino have some of our favourite restaurants and of course an evening gelato around the Villanova marina while the sun goes down is a must."

British tourists discovered Puglia in numbers back in 2004 when Ryanair began flights from the UK and today several airlines fly into either Brindisi or Bari airports on Puglia's east coast. Flight access from London is "a dream" she says and the family generally chose to fly with EasyJet from Gatwick. By booking ahead they can bag good deals such as four return tickets this Easter for only £270.

When they bought Melissa and Blaise replaced the kitchen and bathrooms and smartened up the interiors. Outside they have added a dipping pool and hung hammocks in the one-acre garden with views over the olive groves. The result is a house that they can easily rent out when they aren't there themselves.

"I don't do anything other than put it on a rental website and last year, apart from when we were there, we were booked from June through to September," adds Melissa.

"I rent from £550 per week to a couple in June up to £1,500 for a large family of six in August. On average the villa yields at least £5,000 each year which covers our costs and our own holidays there when we go for a month in August and a fortnight at Easter."

After five years the family are looking for a smaller home in the same area and their beloved villa is for sale.

"Our sons have grown up knowing Puglia and even ask me to buy octopus for dinner when we are back in London," says Melissa. "They love visiting - long may that continue!"

Originally published in A Place in the Sun Magazine