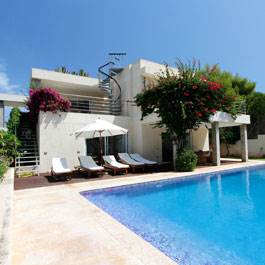 One of Ibiza's leading property agents reports that its annual sales increased by 20 per cent in 2013 - confirming the upward trend that began in late 2012.

Engel & Volkers Ibiza reported prices on the rise of up to 5 per cent for top properties around the island and the average value of property sold last year increased to €1.1M.

The island's international clientele is dominated by German-speaking buyers (including Swiss and Austrians) followed by British, Dutch and French.

In the past year, Engel & Volkers Ibiza reports that properties have been selling faster with a selling period of 3-6 months for a the best located properties.

However, in general, sales averaged from 6-18 months to complete.

Entry price for a two-bedroom apartment in a good location is around €400,000 with a top price of approximately €9.5M for a historical palace in Dalt Vila in Ibiza's old town.

The average age of buyers is around 47 years attracted by the relaxed lifestyle, Ibiza's countryside and beaches, a vibrant music and social scene featuring international brand named clubs/cafes/restaurants.

In Marina Ibiza there was increased demand for super yacht moorings for yachts of 20 metres.

This upward trend and pressure on existing marina capacity has in turn lead to the transformation of Ibiza's former ferry harbour, which now has 7 new moorings for yachts of up to 110 metres and is set to attract more top spenders.

Investors are launching quality new build developments this year such as the new 480 room Hard Rock hotel, located on the popular Playa den Bossa, scheduled to open in May of this year and has announced the first International Ibiza Music Summit as its first event to start the season.

Increased flight connections with various airlines including British Airways and Vueling will come online this year.

Ibiza will also host the Speedboat World Championships (5-7 September) at Playa den Bossa, the first to be held in Spain.

The outlook for 2014 is optimistic based on the continued strength of the Ibiza "brand" and international appeal.

What's on the market?

OR AN AFFORDABLE OPTION...
€575,000. Cala San Vicente. An ideal holiday home with sea views. Features 2 bedrooms and 2 bathrooms in the main house, plus separate guest house with one bedroom/bathroom. The property is located only 200 metres away from the beach and 10 minutes drive from San Carlos.

We have properties listed on the island for €265,000. Search here for more properties for sale in Ibiza here.