Buyers' market in the Algarve: lowest prices since 2008 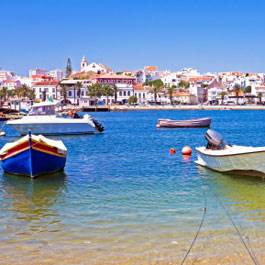 It seems it's a great time to buy in Portugal - especially the ever popular Algarve, as featured in our new TV series.

Bank valuations of property in the Algarve region of Portugal have continued to fall since 2008 and the prices themselves are following suit.

Official figures released at the end of 2013 show that property prices in the Algarve and across Portugal have now sunk to an unprecedented level, below the banks' estimates.

Experts predict that the Algarve property market will reach its lowest point at the end of this year, before the economic recovery in Europe begins to take hold in the region.

By comparing the true market data from its database of more than 24,000 Algarve property listings with 2013 bank valuations from Statistics Portugal (INE), Algarve property website Meravista found that property prices in the Algarve were on average only 5 per cent higher than the bank valuation of €1,298 per square metre, overall.

Furthermore, in two of the region's most popular locations with UK buyers - Portimão, and Olhão - true property prices were actually lower than the average bank valuations produced by Statistics Portugal (INE) in December 2013.

In the sought-after seaside communities of Albufeira and Lagos, the true prices also fall below the provincial average.

Banks will typically value properties at lower than the true market value to avoid risk and to help ensure they sell, varying from 1 to 20 per cent less depending on the standard used. In a depressed economy such as Portugal's these values can be even lower.

The fact that estate agents and home owners are meeting or undercutting the values set out by the banks demonstrates that the market has reached a significant low and therefore shows a huge opportunity for those wanting to invest this year.

Anita van Huson, co-founder of Meravista, said: "Algarve property was experiencing inflated growth in advance of the recession, so it was hit particularly hard when the markets crashed. I don't think we'll see valuations as low as these for a long time to come, which makes the Algarve an ideal place for property investment.

"As the area's economy is starting to recover, now is the time for people thinking about making a life change or buying a retirement property to make the move."

With its sandy beaches, beautiful views and warm climate, the Algarve is a popular holiday location and ideal for those looking to retire abroad.

In a recent survey of expats living in the Algarve, conducted by Meravista, the average age of those questioned was 64, and 56 per cent of the 321 respondents were already retired.

The top five reasons for moving to the region were cited as the warm climate, good lifestyle, retirement, a lower cost of living and lower crime rates. As well as providing a good retirement option, the Algarve's popularity as a holiday destination makes it an ideal location for purchasing a holiday rental home.

Portugal now has some of the lowest property prices in Europe, representing excellent value for money.

By contrast to other countries in Western Europe, Portugal offers generous tax breaks to foreign buyers so investors stand to save money by choosing Portugal over alternatives such as France which has an unpopular top tax rate of 75 per cent.

Retired pilot Andrew Fawkes and his wife Jane chose the Algarve as their new winter home and are purchasing a property just north of Loulé where they live October to April each year and which they rent out during the summer months.

After their family winter villa in Cyprus became "surrounded by a sea of concrete" due to redevelopment and the financial crisis hitting Cyprus hard in 2013, Mr and Mrs Fawkes decided it was time to sell their home and move elsewhere.

"We were specifically looking for somewhere with a good winter climate, value for money and a generous tax outlook," said Mr Fawkes.

"Portugal kept popping up in our search."

Initially the Fawkes' put an offer on a villa just north of Faro, which was refused.

"We elected to find somewhere to rent for six months and take a long hard look at the whole of Portugal, but the Algarve in particular. Within a week, we had seen enough property to let us know the value for money in the €500,000 range was quite unbelievable, with most properties selling at almost half the 2008 prices.

"We soon found a superb property just north of Loulé [in the Algarve] which offers everything we need."

As a retired pilot, Mr Fawkes has travelled extensively. He continues, "There is hardly a country in the world that I personally have not visited but Portugal's Algarve has everything on offer - climate, culture and a beautiful coastline and its only two hours from the UK!"

Get help buying a property in Portugal