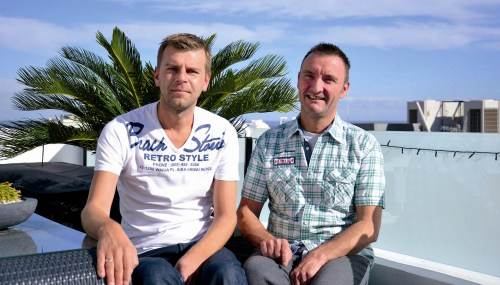 I first came to Malta in the 1980s for a month as a gift from a family I was working for, and we've been coming as a couple for the last nine years visiting Richard's mother who bought a place here in 2003,' says John. "We came out most recently for Christmas and New Years last year and realised that we didn't ever want to go back to England. We packed in our jobs in January - I worked in the building trade; Richard was working as a senior manager at Rentokil - and put our house [in Sunbury on Thames, close to Hampton Court] on the market, which we managed to sell in just two days. By February we were out in Malta and on the hunt for a place to live."
The property they ended up buying - through Frank Salt is a three-bed apartment in St Julian's spread over the entire top floor of a converted school building. It's got a large balcony and terrace as well as original shutters and a private parking space, all of which John managed to negotiate down to just €340,000 (£275k).The couple completed in July and rented nearby for two months while they waited for electricity and water to be installed and they chose the fittings and fixtures they wanted for their kitchen. This was a delay which was partly caused by their two cats who they didn't feel would cope without air conditioning. "They absolutely love it here now," says John. "There's an enormous roof terrace overlooking the bay which they get out on and explore."
And it seems that it isn't only the cats who have taken to life in Malta. The quality of life and the availability of fresh produce is something that John and Richard say will never stop appealing to them. "Every Tuesday we have a man who comes round delivering warm baked rolls and sliced bread and we have another man at the top of the road who sells fruit and veg everyday which is half the price and twice the quality of what you'd buy in M&S. The local meat and fish is sensational and the butcher and fishmonger will prepare it in any way you like. Because they know you, they don't try and overcharge you, and you know that they're giving you the best quality they can."
The cost of living is also far cheaper in Malta, explains John. "Both Richard and I smoke, and cigarettes are a third of the price here, as are wine and spirits. Even our bills are cheaper. Our last water and electric bill in England came to £1,200 for the quarter. In Malta that's how much it's cost us for the installation of all the gas and electricity meters, and six months worth of bills."
For anyone else considering a move to Malta, John has these words of advice - get used to a mañana attitude. "You have to come to Malta with a degree of patience. English people expect everything to be the same as at home which would be really boring. You quickly realise that things in Malta happen at their own pace, partly because things have to arrive from elsewhere and it takes time for them to reach the island. It's a completely different world but once you get used to that, it's incredibly refreshing."

visit a place in the sun currency