We moved to Cyprus during the crisis and never looked back 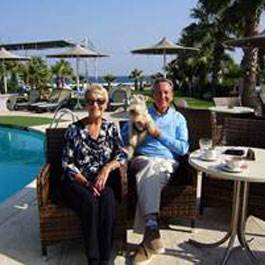 In the current issue of A Place in the Sun magazine Jasmine Harman has investigated exactly how people are faring in Cyprus but here we bring you news of a couple of expats for whom things have worked out especially well.

John and Claire Walters from Porthcawl in Wales were waiting to move into their new home in Cyprus when the banking crisis hit in March, but proof that many expats have been unaffected by the island's economic problems, the couple are now happily settled into their bungalow and loving life on Aphrodite's Isle.

They arrived in Cyprus at the start of November 2012, when they signed the final contract for their bungalow in Liopetri, a village in the Famagusta district, which they found with help from the Overseas Guides Company and local agents during two visits to Cyprus.

Delays meant completion was pushed back to the end of April, after which the developer would have been liable to pay a financial penalty. In the meantime, their estate agency provided them with free accommodation.

"Then in the interim the financial situation in Cyprus hit the headlines, as did a construction workers strike," said John, a 66-year-old retired business advisor.

"The developer used sub contract labour which meant he had limited control on progress. However, building resumed after we chased the builder, and we spent the first night in our completed new home in April."

Since moving in, the couple have wasted no time in getting to know the local area, attending the local Anglican Church, visiting Famagusta's farmer's market and joining the short mat bowling club at a local hotel.

Asked if they have been affected by the banking crisis, John commented: "In all honesty, not at all. We had decided before leaving the UK that until we knew how the Spring budget might affect us, we would continue to operate our finances through our UK bank and to continue paying UK taxes. So, all our money was safe in the UK."

From his own experience, John offers the following tips for other people buying new-build property in Cyprus:

Search here for properties for sale in Cyprus.