We followed our children out to Australia - and love it. 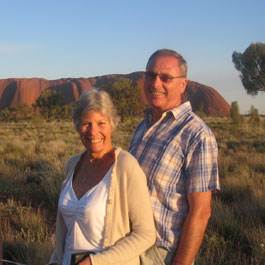 Australia is still one of the top five destinations for British families relocating overseas and it's possible to move there if your children have already settled there for around two years.

If you're missing the grandchildren and fed up with Skype, what are you waiting for? - as that controversial Australian tourism PR campaign once asked in slightly blunter terms.

Well Paul and Jane Cowley didn't waste too much time and in September 2011 emigrated from Seaford in East Sussex, where they had lived for over twenty years, to Bellingen, near Coffs Harbour - between Brisbane and Sydney on the East Coast of Australia.

Nearly two years on, the couple are loving life in Australia and making the most of their retirement. Paul Cowley comments on their experience of relocating and starting a new life, half way around the world.

"We made the decision to emigrate to Australia so that we could spend more time with our children and first grandchild. Our daughter and her husband have lived in Sydney since 1999 and our son and his wife moved to Bellingen in New South Wales in 2002 and now have a six-year-old daughter. Jane's brother also lives in Perth so it seemed like the natural thing to do when we retired.

"We got a contributory parent visa to live in Australia as retired parents of children living in Australia [where you are sponsored by your child] which meant that we were able to get our visas in about 18 months and in June 2010 we were granted our permanent residency visas.

"We activated these with a trip in October 2010 to really research the area where we wanted to move to. We had visited many times prior to that to see our son and daughter, including a three-month visit in 2009. This was really important, as it meant that when we finally made the move, the area and location was actually quite familiar as we'd visited frequently.

"We sold the house in Seaford in 2011, left the UK after shipping all our furniture, and rented a flat on the coast, near Coffs Harbour for three months while we started our property search in earnest. We'd already decided on Bellingen and started looking at properties in the area on the internet, so we knew what we could get for our budget.

"The houses in this region are usually single story and modern, around ten years old. We viewed a couple of properties before falling in love with a three-bedroomed house in Bellingen for just under £270,000. It has a double garage and larger living space than we had in the UK. The sale of our house in Seaford also means that we can live mortgage-free in Australia, which is a great position to be in as it means we can really enjoy our retirement and spending time with the family.

"The process of buying a property in Australia is much quicker than in the UK. Over here you can request to be in your new house within about 30 days of agreeing the price with the vendor. However we weren't in such a hurry so we worked with the vendor to agree a convenient date.

"We moved into our new house on 21st December, in time for our first Christmas Antipodean style.

"We both have Government pensions which we still benefit from, and as expats we still get our UK state pensions, but we don't benefit from any yearly incremental rises. Our pensions are paid into a UK account and we transfer funds to Australia when the rates are favourable. Although since moving here the exchange rate has gone down quite considerably.

"Fortunately we are in a good financial position but external factors, such as the exchange rate or fluctuations in the global economy which are outside of your control can have a significant impact if you don't have much of a financial safety net."

Settling into a new country, making new friends and developing your social circle can be a daunting prospect whatever your age. As a retired couple, Jane and Paul Cowley were eager to make the most of their free time and integrate with their new community by joining the local church, local choir and Rotary Club.

"The climate here is lovely, it's consistently warm. It's a really lush, green area so we do get rain, but it's pleasant most of the time, so our way of life is much more outdoor focused. We have breakfast on the veranda most days enjoying the view. We go to the beach regularly; it's about 20 minutes away. We also go for walks along the headland at Coffs Harbour where you can whale and dolphin watch, " reports Jane.

"There are a few quintessentially British things that we miss but we've honestly not regretted our move for a moment. We planned our relocation for years, and we did our research so we knew what to expect.

"Anyone thinking of a new life abroad for whatever reason - new job, new start or for a happy retirement like us - should research thoroughly, plan ahead, seek advice and go for it. We've never looked back."

Search here for properties for sale in Australia.